What is the Consumer Confidence Report?

The consumer confidence report is a survey conducted by the Conference Board that measures consumer attitudes about both the present and future situation of the U.S. economy. Each month, five thousand consumers across the U.S. are interviewed and survey about their thoughts of economy. Their answers are then graded under different, weighted components and later compiled to give us one number that makes up the Consumer Confidence reading.

Why Should I Pay Attention to this report?

Consumer confidence is basically a measure of how good (or bad) consumers think the economy is performing. The more confident consumers are about the economy and their personal financial situations, the more likely they will be willing to shell out their hard earned cash. On the other hand, if consumers are concerned about the state of the economy, chances are they'll hold back on spending right now, and instead save their cash for a rainy day. Keep in mind that the consumer consumption accounts for about two-thirds of U.S. GDP. That said, having an idea what consumers feel and how it could affect their spending habits could provide valuable insight with regards to predicting which way the economy may be headed in.

Is there really a correlation between Consumer Confidence and Spending? 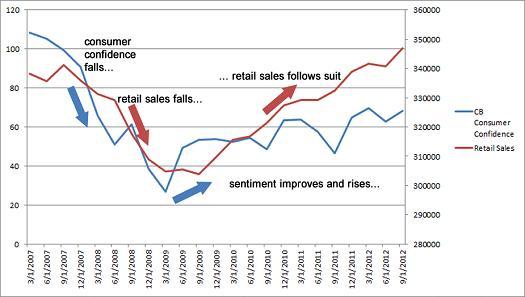 Then, once the Conference Board index bottomed out at 25.0 in early 2009, we saw retail sales start to pick up as well. Over the past few years, both consumer sentiment and retail sales have seen steady growth.

No, the correlation isn't pitch perfect, but at the very least it provides support for the argument that consumer sentiment does have predictive qualities in terms of predicting the direction of retail sales growth.

That said, we should continue to measures this relationship, as it could give us hints as to how well the rest of the U.S. economy may perform this 2013. Should confidence continue to rise, retail sales may follow suit. This could have a ripple effect on the rest of the economy, as more spending will allow businesses to expand, which could in turn lead to them hiring. Before you know it, NFP figures are starting to hit the 200,000 mark, while GDP growth is steadily climbing each month!

Make sure you check out your calendars every last Tuesday of the month to find out the results of the Conference Board Consumer Confidence report!

USD/JPY recaptures the 110.00 level ahead of Fed

The dollar advanced against safe-haven rivals, with USD/JPY trading above 110.00 and nearing the monthly high at 110.32. Bulls encouraged by yields’ comeback.

The Dollar’s initial weaker reaction to Thursday’s May inflation report, (it continued to rise to 5% annually from the 4.2% seen in April and the CORE reading at 3.8% was close to a 30-year high), which sent the USDIndex to test the week’s low zone at 89.90, was short – lived