Hello traders! This week’s newsletter will explain the power of using higher time frames in your trades.

One of the great things about being an instructor for Online Trading Academy is that I get to meet people from all walks of life and from nearly every industry that exists. I enjoy the diversity of people! However, one thing that seems to be somewhat common is the perception that traders/investors NEED to spend a lot of their time staring at their computer screens to be successful in trading. I strongly disagree with this!

Several famous traders made comments pointing out that, the money is made in the waiting. In fact, some of the most successful traders lie in wait for the chosen trading instrument to get to a favorable price level on the chart, and then pounce. Then they lie in wait for days or weeks or even months as the price goes in their chosen direction. Once in a position, their only action is to manage a stop loss to lock in profits over this trade.

One thing that has become apparent to me and many other experienced traders is that charts are fractal, meaning that a 1-minute chart will behave in nearly the same way as a daily chart. One of the problems with using a small-time frame chart is the fact that the smaller the time frame, the more computers/bots/algorithms you are trading against! When you understand that these computer bots might be in a trade for only a few seconds or minutes and their position sizes can be huge, most retail traders can’t compete with those machines. The way I describe it is that these computer bot companies have more money than us, faster computers than us and faster internet connections than us. It would be like me (5’ 10”, 175 pounds, 50 + years old) trying to compete in the NBA against someone like LeBron James…doubtful I would score even one point, let alone win!

So, let’s look at a couple of examples of fractals in the market, and the corresponding amount of effort involved in trading them.

In the following 15 minute time frame on the EUR/USD pair, a very short term double top formation can be seen. The short-term trader would look to go short at the blue arrow. With an entry at approximately 1.090, their profit target would normally be about 1.065. An amazing 15 pips! They would also be at or near their computer for the few hours they were in the trade…lots of attention required for 15 pips! 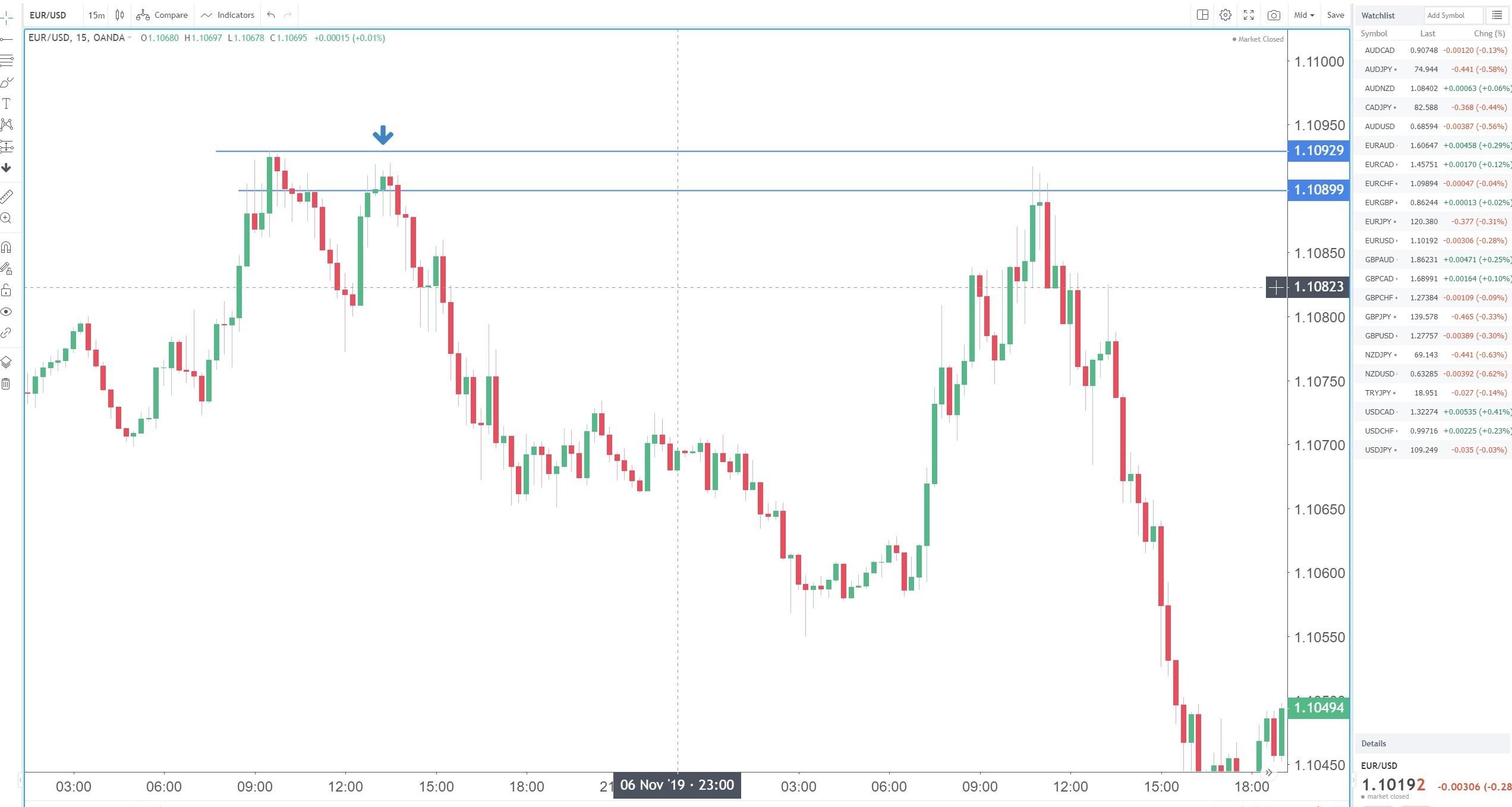 Now, when we look at larger time frames, we are trading with institutions that plan on being in their trades for weeks, months, even quarters at a time. As these huge multinational corporations are hedging their currency risk, I believe they are trying to make sure that they are meeting or exceeding their quarterly earnings estimates to drive their share prices higher and achieve their quarterly/yearly bonuses. If a massive, multinational corporation doesn’t care about making 8 pips on a 1-minute chart, why should we? If they are planning on being in a trade for hundreds or thousands of pips for weeks at a time, I think we should consider following their lead!

In this next chart, a Daily time frame on the USD/CAD pair, a similar (fractal!) double top has formed. The longer-term trader would enter their short at the blue arrow, around the 1.3326 mark. As you can see, this trade would have produced many more pips! Using any number of trade management techniques, they could have stayed with this trade down to nearly the 1.3100 level. This should have given them over two hundred pips over about two week’s worth of time… 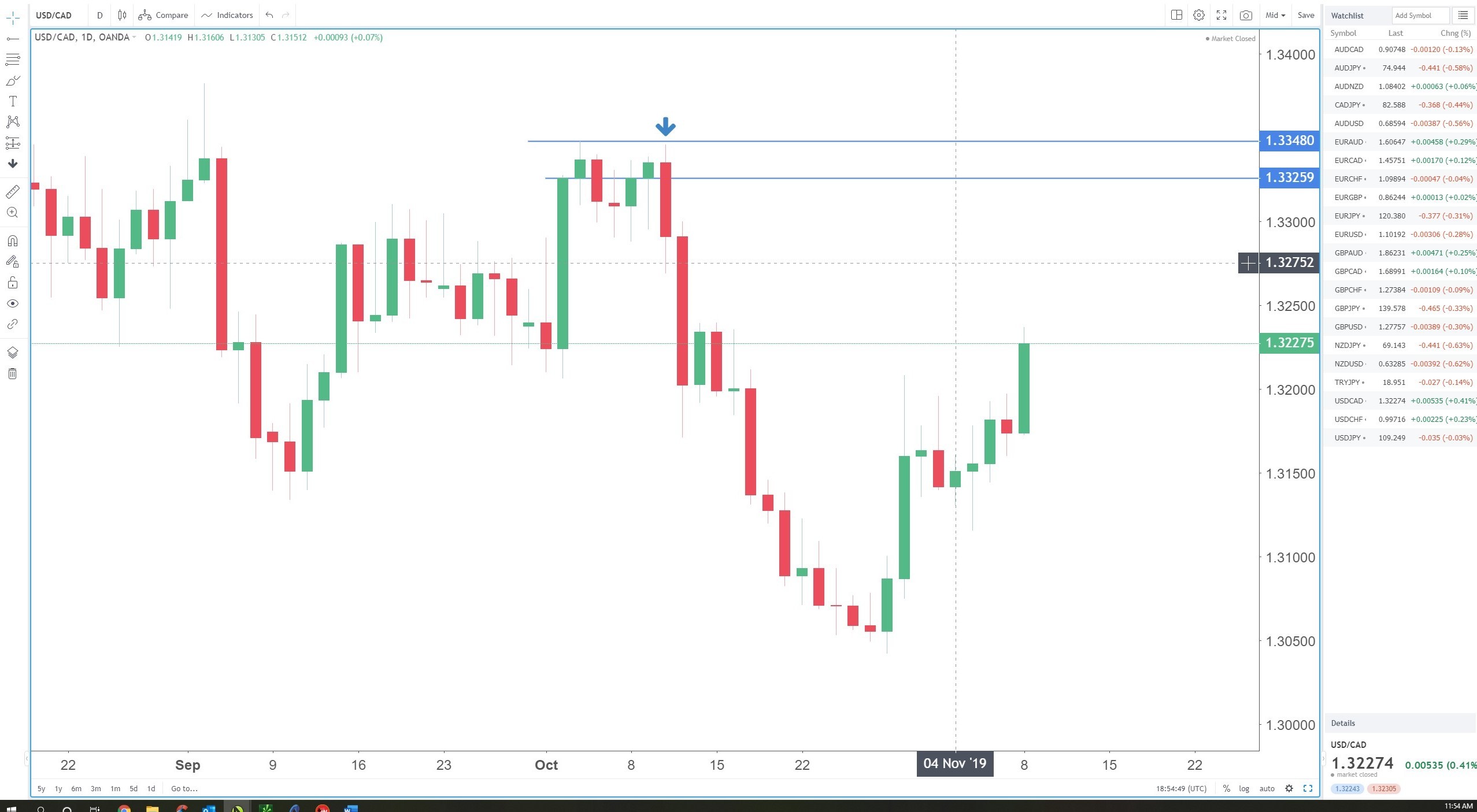 One of the great things about being in a trade that is going your direction is the lack of trader involvement or attention needed to manage this trade! Every day or two we would expect you to move your stop loss on down, first to break even, then to lock in profits as the trade progressed. How much time does it take to adjust your stop loss? Merely seconds. A few seconds to see if you SHOULD move your stop, a few seconds to see WHERE you should move your stop, and then a couple seconds to actually MOVE the stop. Again, the big pips are made in the waiting, and letting the institutions do their work.

One last thing. When in a trade for days or weeks at a time, one of the worst things you can do is check it every few minutes! This opens up the difficult side of trading: the emotional attachment to the pips on the screen! Imagine you were up 100 pips, then only up 75 pips, then only 20 pips and the emotions you would be feeling. What does the normal retail trader do in that situation? They take themselves out of the trade just to capture that small profit. Invariably, the chart then goes back in their direction, causing them to kick themselves, or even worse, jump back in the trade! We call this chasing the trade. Please don’t do that! If you don’t watch your trade too closely, those small time-frame emotions won’t interfere with your judgement process. Again, often the money is made in the waiting, not the watching!

EUR/USD holds around 1.0900 despite sentiment deteriorates

An unattractive dollar helped EUR/USD reach 1.0926, its highest in a week. The positive market’s mood that lead the way ever since the week started begun to ease. Wall Street trimmed early gains, ends the day mixed.

GBP/USD consolidating above 1.23 as Johnson remains in ICU

GBP/USD is trading above 1.23, yet off the highs as concerns over PM Johnson persist. He remains in intensive care. The safe-haven dollar is gaining some ground as stocks pare gains.

USD/JPY: US dollar sidelined vs. Japanese yen, trading near 109.00 figure

USD/JPY is trading above the 100/200 SMAs as the spot is trying to stabilize above the 107.00 handle amid slightly better market mood.

EUR/USD holds around 1.0900 despite sentiment deteriorates

An unattractive dollar helped EUR/USD reach 1.0926, its highest in a week. The positive market’s mood that lead the way ever since the week started begun to ease. Wall Street trimmed early gains, ends the day mixed.

GBP/USD consolidating above 1.23 as Johnson remains in ICU

GBP/USD is trading above 1.23, yet off the highs as concerns over PM Johnson persist. He remains in intensive care. The safe-haven dollar is gaining some ground as stocks pare gains.

USD/JPY: US dollar sidelined vs. Japanese yen, trading near 109.00 figure

USD/JPY is trading above the 100/200 SMAs as the spot is trying to stabilize above the 107.00 handle amid slightly better market mood.

Coronavirus figures: Why traders should ignore Mondays and Tuesdays, focus on other stats

Figures on Mondays tend to show a drop in cases and deaths in various places in the world. such as Spain, and New York's figures all provide hope, contributing to a massive stock market rally on Monday, April 6.

Gold: Investors could be getting complacent and gold is great barometer

he USD 1640.00 level is a decent support level to watch as it has been used on six occasions and seem reliable. Even if it does break it will tell you a lot about the state of the market and the perception of the safe-haven asset.