Investment advisors have long promoted a strategy of buying securities and holding them indefinitely. This strategy, called Buy and Hold, is a passive strategy that ignores market trends and attempts to increase the value of the portfolio over a long period of time. But does this strategy really work or are there better opportunities for knowledgeable investors and traders?

Does Buy and Hold Work?

Looking at the historical chart of the Dow Jones Industrial Average, there seems to be times where simply holding a basket of stocks or the index itself would have indeed made profits for the individual investor. However, there are other market environments where that strategy would have resulted in no gain or even lost money.

For example, buy and hold worked here for 22 years. 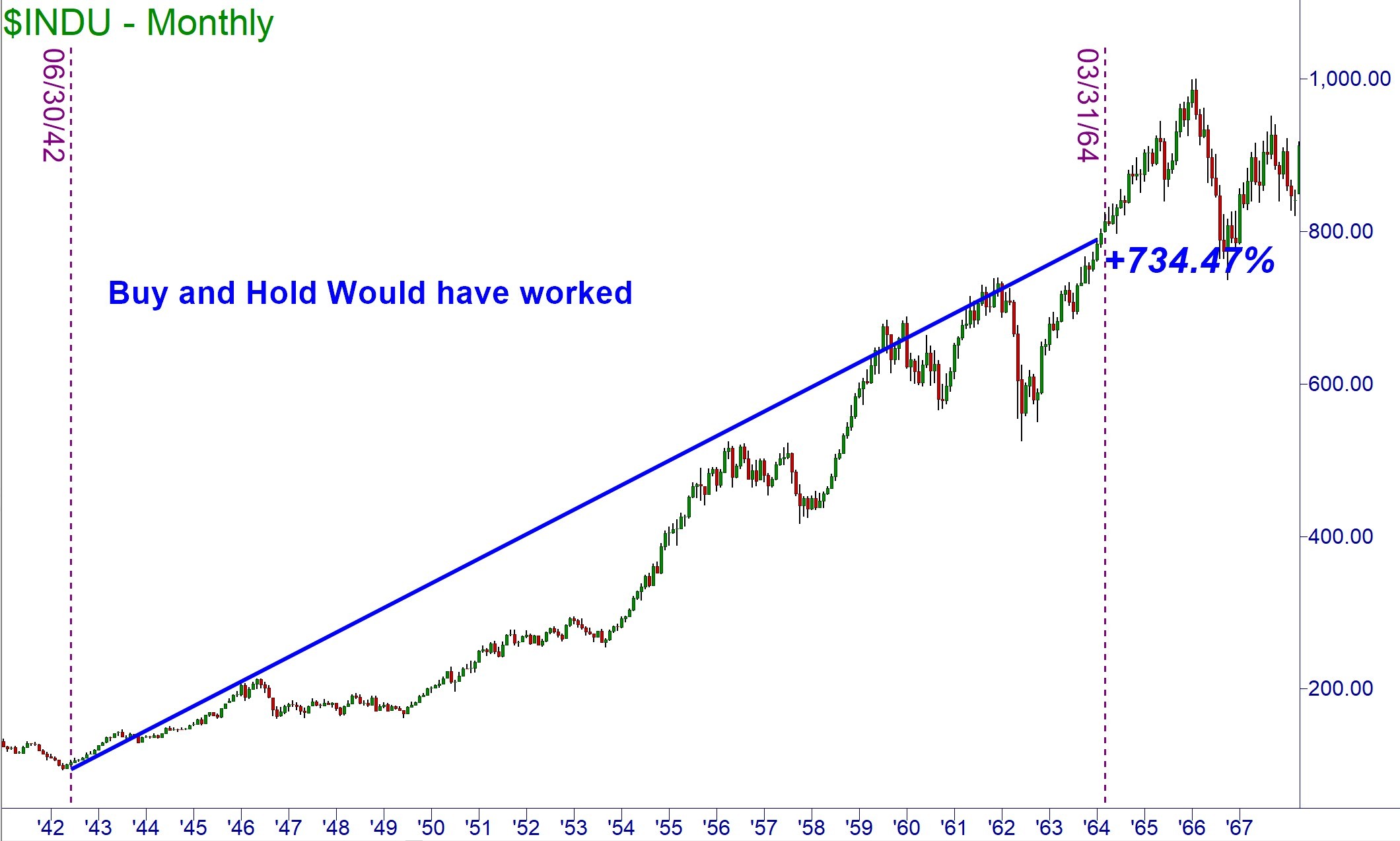 But was followed by 18 years where it did not work! 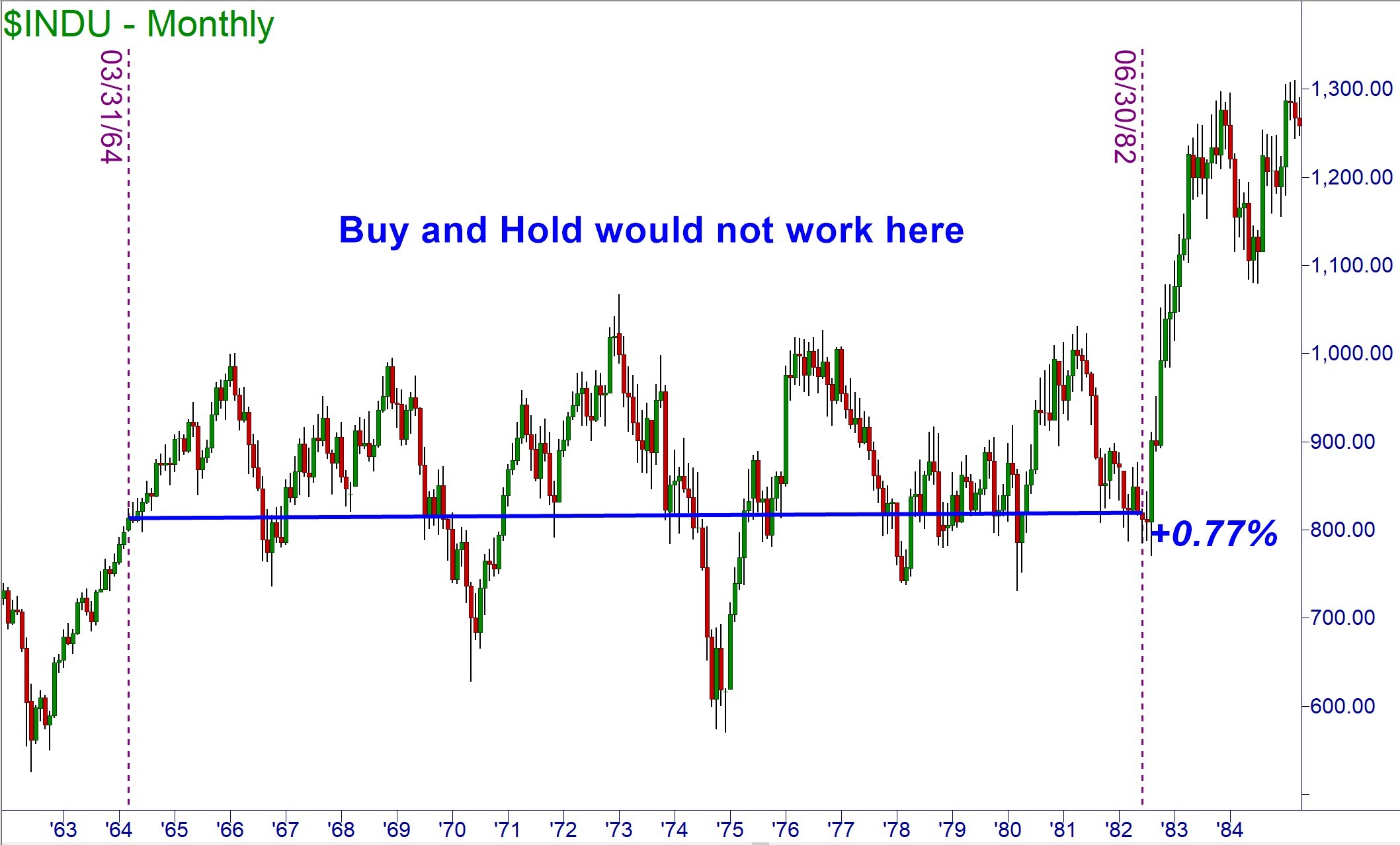 Which was followed by nearly 17 years where buy and hold worked out for investors! 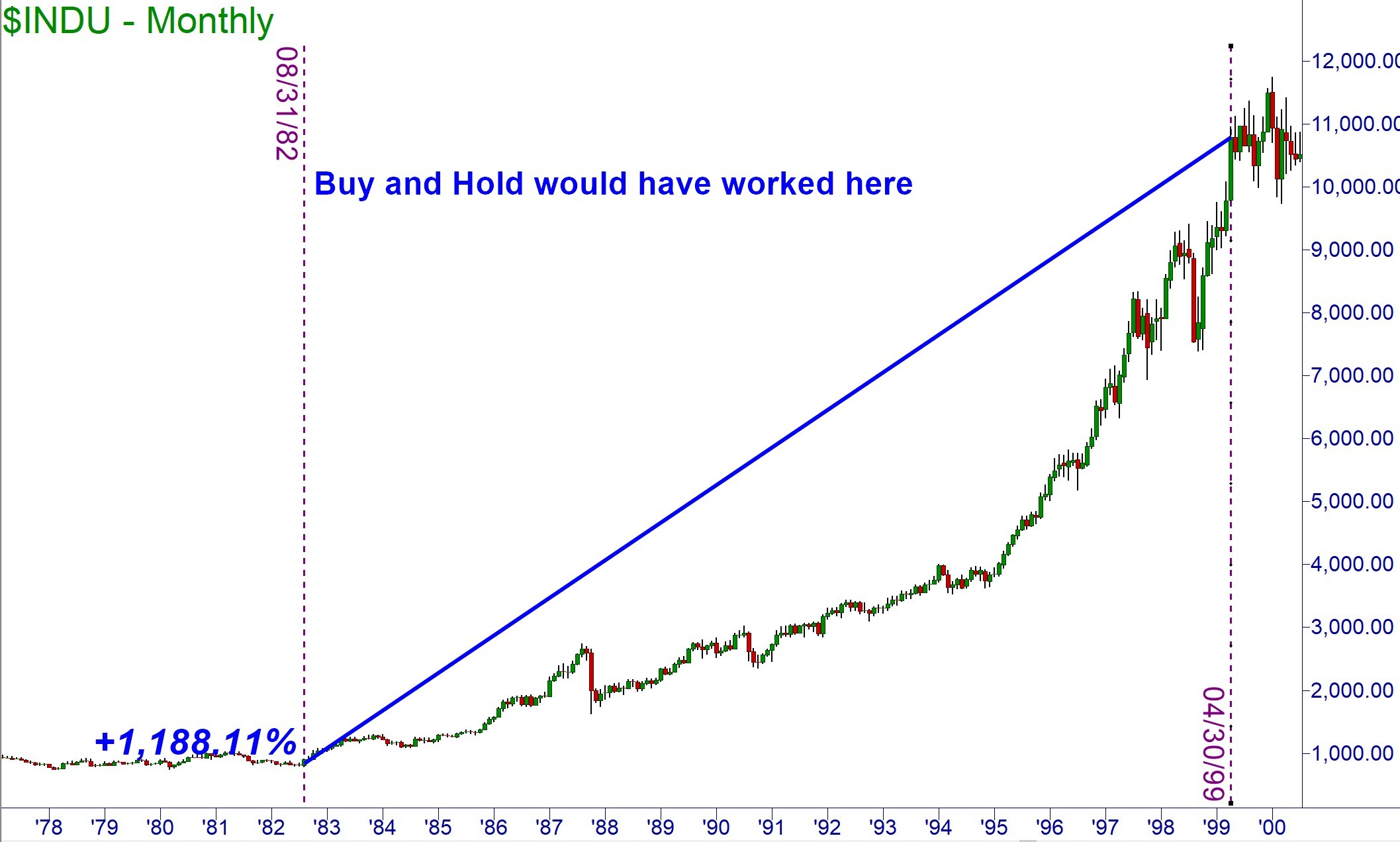 And then 12 years where buy and hold didn’t work. 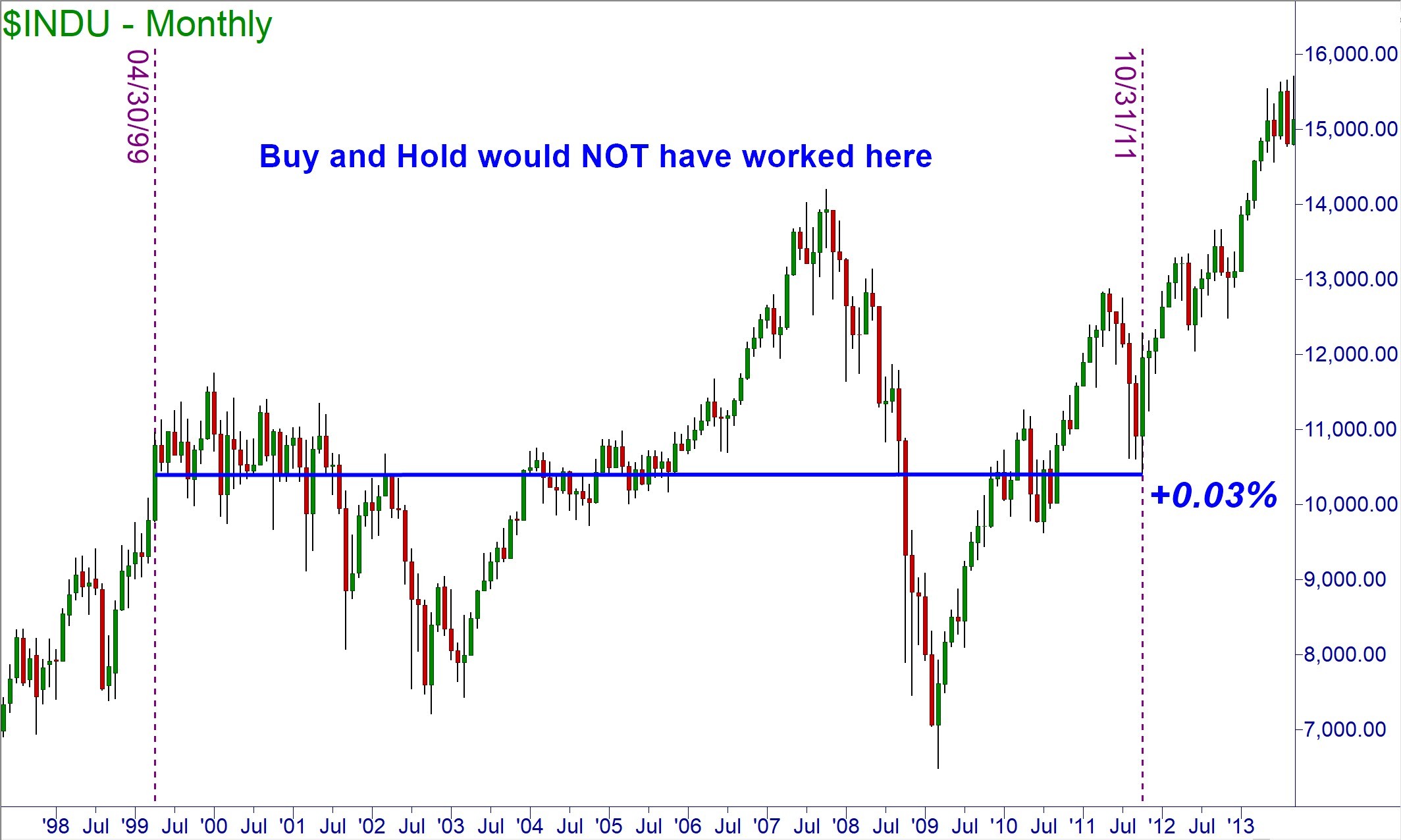 The periods seem to be shortening as the last buy and hold period to work was only a little over six years long. 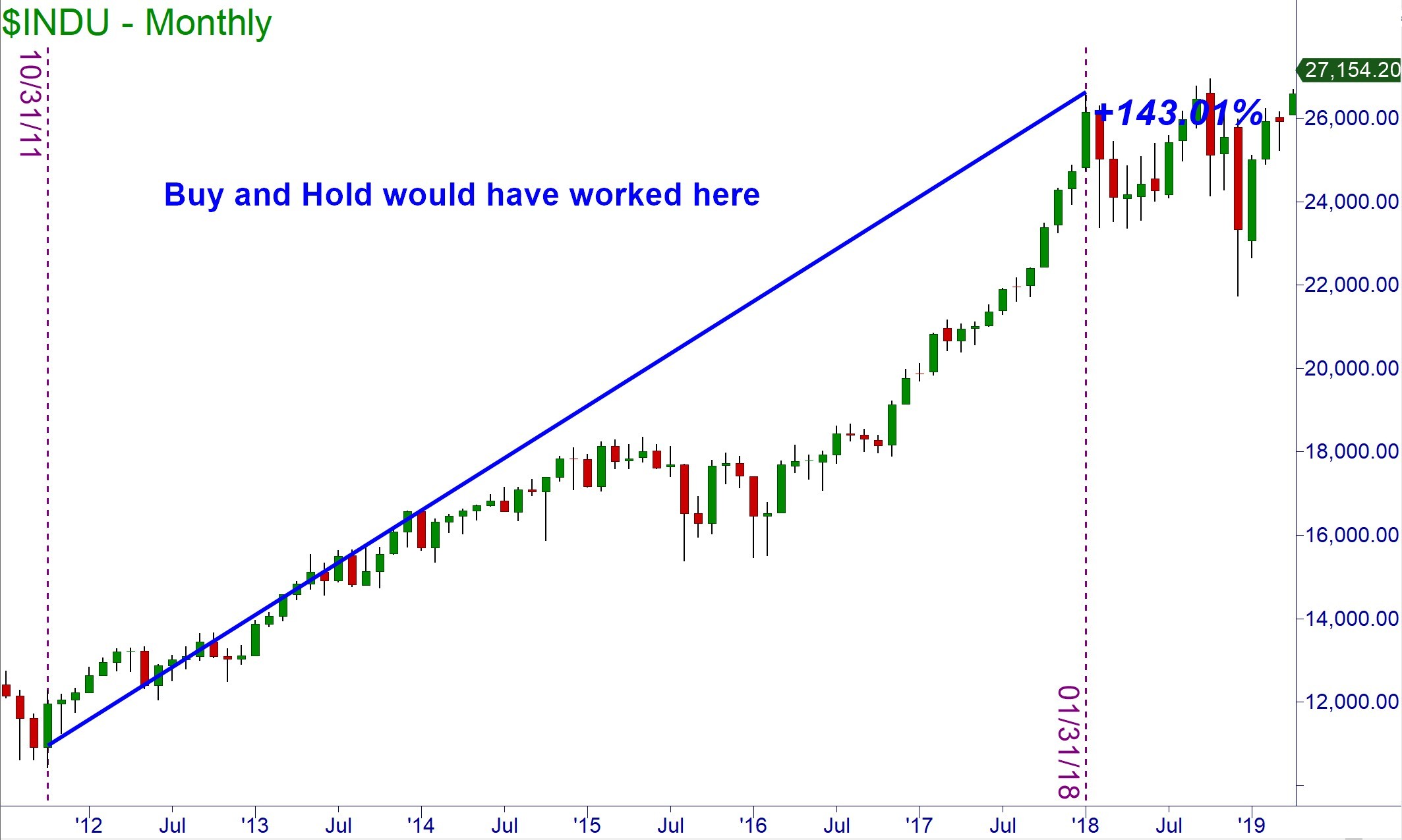 So how do you know what market condition you will be in for the next few years? There are several signs that can help you. Markets that are conducive to buy and hold are those with low volatility. Volatility is a measure of price movement away from the average. It measures how far and how fast prices are likely to move. It is also considered to be an investor fear gauge. Investors love stability and steady growth. If volatility increases, they become worried about sharp price movements and may exit the markets.

As we can see in the chart below, volatility can be measured by an indicator called Average True Range (ATR). When ATR increases, expect faster and more dramatic price movements. When ATR is low, prices move slower and usually upward. When ATR gets too low, it usually means that a large price movement is coming soon. 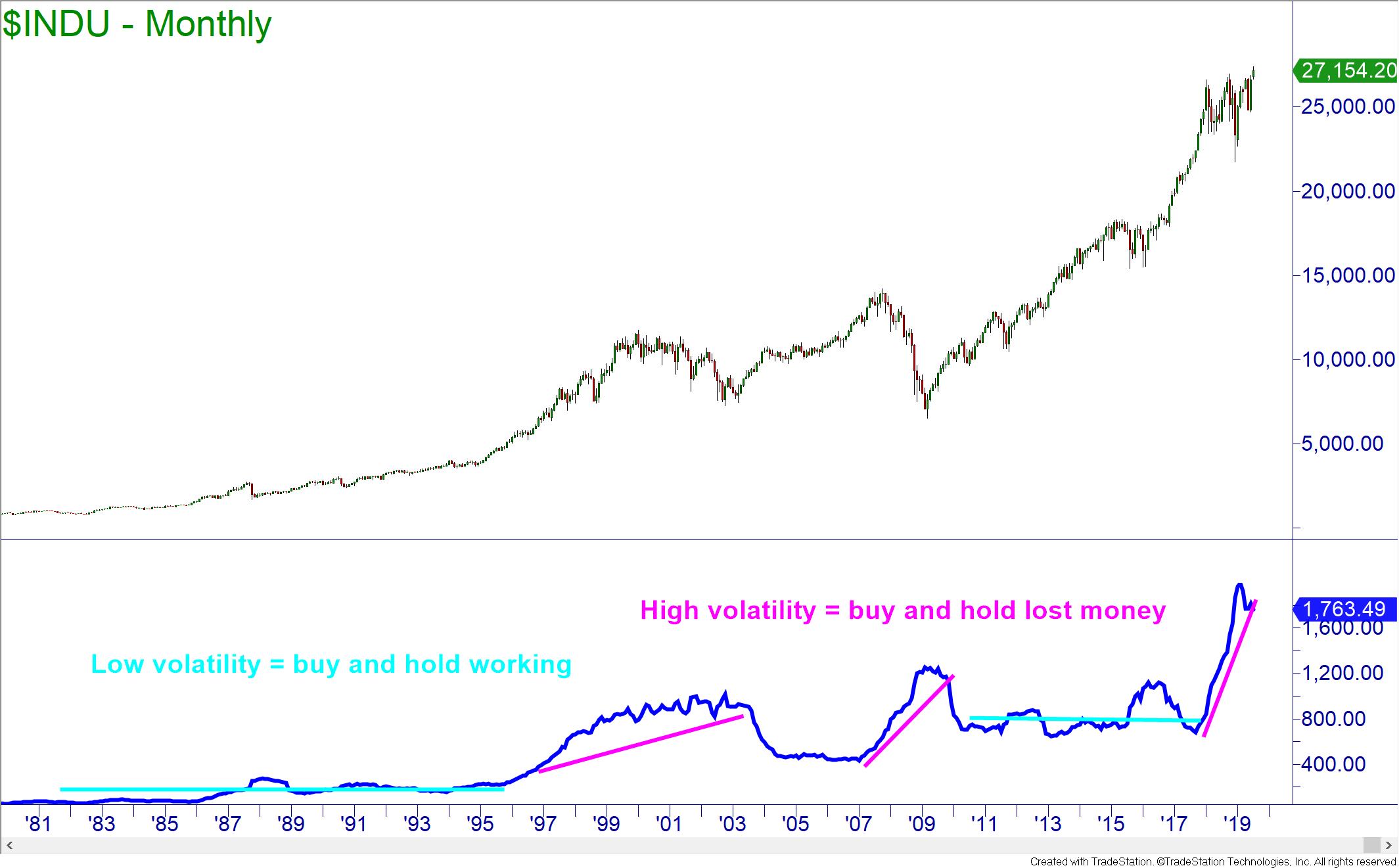 Another indication that major price swings could be imminent in the markets is the valuation of the market. Warren Buffett is reported to have used the ratio of the total market capitalization versus the GDP. When stocks become too overvalued, the price will generally track back to the norm. However, often they will overcorrect first, leading to wild price swings and market crashes before finally settling at the fair value. 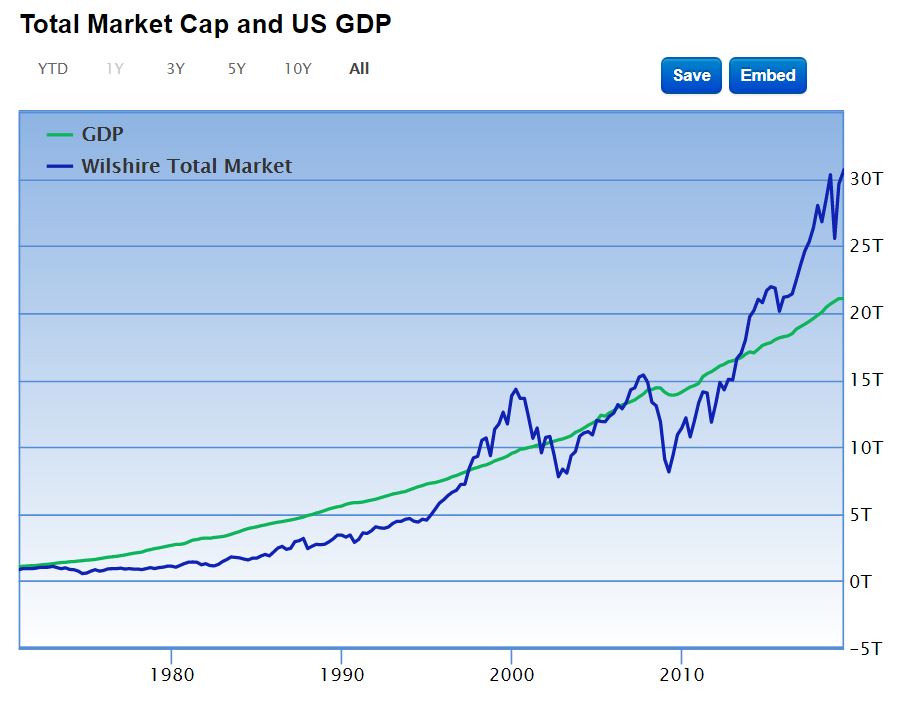 According to the Buffett indicator available on www.gurufocus.com, the stock market is likely to offer an annualized return over the next eight years of -2.2%. This means that we are likely to return to a market environment filled with large price swings both up and down. While this is great for the active investor who times the tops and bottoms, it is disastrous for the buy and hold investor. 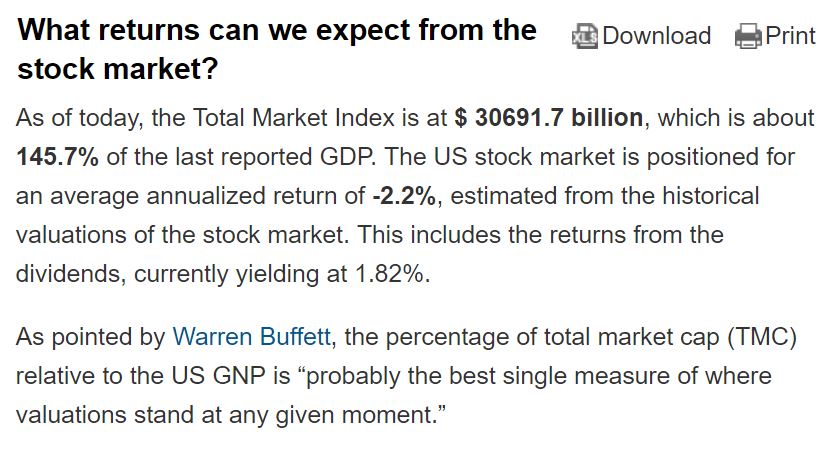 Causes of Market Movement as a Gauge of Expected Market Conditions

The cause of market movement is another major influence on market behavior that is often overlooked. Looking back in history, there are two major creations that launched the prices of the stock markets skyward and changed the face of the markets themselves: the 401(k) and the internet.

How 401(k)s Affected the Markets

In the late 1970’s companies found out about the 401(k) part of the tax code. Ted Benna, considered to be the father of the 401(k), popularized this investment vehicle in 1981. This allowed for a major tax deduction to companies and created an alternative investment vehicle that was cheaper and easier for companies to provide versus the pension.

In the 1980’s, baby boomers made up a major part of the US work force. The sheer number of them entering into the stock markets changed the face of the markets and caused the greatest bull market ever seen up to that time in the history of the markets.

Unfortunately, the cause of the boom may also be its undoing as the earliest baby boomers are now 73 years old. Mandatory distribution of retirement money begins at age 70 ½. This means that the largest portion of the population is now being forced to withdraw their investments from the stock markets. With these required sales, the market will likely see a drop.

This is especially true because the Millennials who are now entering the work force and replacing the aging retirees are burdened with many expenses and are not saving money in retirement accounts. Without new money replacing the withdrawn retirement funds, the markets can likely not sustain these lofty levels.

How the Internet Affected the Markets

On 6 August 1991, the world changed in a major way. On that date, the World Wide Web became accessible to the public and sped up communications globally. Individual investors reaped major benefits in terms of speed of communication, transparency and better pricing for commissions and execution.

With online account access available in the mid-1990’s, investors could bypass the dreaded broker’s phone call and get their orders placed and confirmed immediately. They could now see the true pricing of securities from the exchange itself instead of relying on the quoted price from a broker which was often marked up greatly.

Transparency and direct access to the markets allowed the individual investor to front-run the brokerages. They could make a minor adjustment to their prices to get to the front of the line and get orders filled before the institutions could. Front-running on both the bid and ask prices narrowed the spreads and all investors benefited with improved pricing for shares.

Buy and Hold Expectations in the Current Market Environment

So, the evidence is pointing toward a future market environment that does not work well for buy and hold but rather benefits from an active investment approach. This type of market requires more attention and education in order to spot and take advantage of the market swings. Those who choose to ignore these moves, could have zero or negative returns for the foreseeable future. It is worse when you add in inflation and the cost of missed opportunity.

The markets took approximately five years to recover from each of the last two market crashes. Do you have an extra five years to wait before retiring? If you continue to buy and hold, you may have no choice. The alternative is to become educated and build your skills so that you can not only protect your money but grow it during these volatile times.

Read the original article here - Is Buy and Hold Dead?

USD/JPY rallies to levels near 110.00 fuelled by bright NFP data

The greenback has broken higher against the Japanese yen, following the unexpected increase on US Non-Farm Payrolls, to reach 2, 1/2 – month highs at 109.85. The pair is on track to a 2% advance this week, following a four-day rally from the mid-range of 107.00.

USD/JPY rallies to levels near 110.00 fuelled by bright NFP data

The greenback has broken higher against the Japanese yen, following the unexpected increase on US Non-Farm Payrolls, to reach 2, 1/2 – month highs at 109.85. The pair is on track to a 2% advance this week, following a four-day rally from the mid-range of 107.00.