The trading community is relentless in its pursuit to find out how and why the market turns. Bull and bear markets surge relentlessly along their path until one day they reverse course and set sail in an entirely new direction, never looking back. Markets march to their own drummer with a language all their own.

Certainly, fundamental valuations play their part in determining where we might be in the cycle. A price/earnings ratio can tell us whether the market, or particular stock, is cheap or expensive at a specific point in time, but it has zero capability of telling us when the turn will come.
To solve this riddle, many turn to technical analysis. Technical analysis is the study of price patterns and the visual representation of emotion in the market. Examples of key technical tools are moving averages, trendlines and Andrew’s pitchfork. While these are important indicators, markets can and will overshoot their technical target, and the study of patterns can give us only a rough idea of when and where a market might turn.

So if fundamental and traditional technical analysis can’t nail the turn consistently, what can?

One class of analysis methods that works over time involves the studies of W.D. Gann. These techniques have proven instrumental in pinpointing and explaining market tops and bottoms. While it’s not always clear why a time and price symmetry identified a market turn, such symmetries do indeed exist. Gann, a well-known analyst from the first half of the 20th century, considered the squaring of price and time his most important discovery. He called it range and time squared.
In short, when the duration of a move squares with the extent of a move, price trends tend to change. On that high level, it’s simple. However, the proper application can be tricky. In “W.D. Gann’s master forecasting methods,” (February 2011) we examined several aspects of Gann analysis. Here, we’ll delve deeper into time and price studies.

Markets are enigmas, and this attribute demands a great deal of flexibility when working with price and time studies. For example, a common manipulation is the decimal point — a Dow range of 7,728 points can square with a rally 77 weeks down the road. A 21-year, 1,108-point range in a market could identify a turn 1,108 weeks later — as it did with the 1987 stock market crash. However, as complex as this appears, markets can get even more complicated. But as it is with the study of pivots, the Gann calculations themselves are decidedly simple. 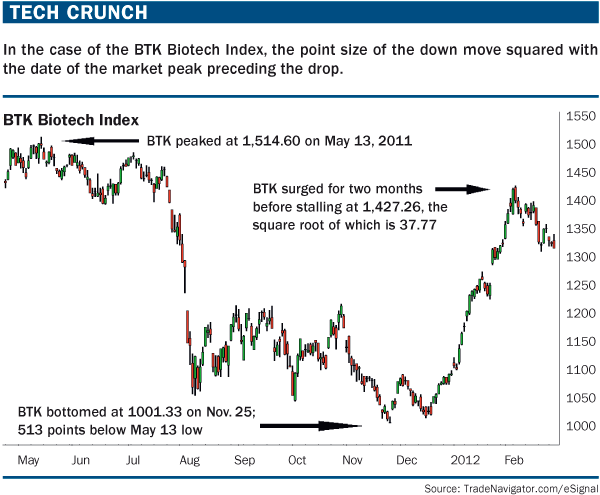 What should be understood about this mystery is it does not materialize every day. However, when it does, it usually leads to a powerful trend, as it did in the case of BTK. Going back to our ’87 crash example, consider the stock index price rise that followed the bottom.

Another progression in the study of price and time work is the square root. In the case of the BTK, the first important pullback in the bull move off the Nov. 25 low came at 1,427.26. On the surface, that means absolutely nothing. However, when we take the square root of that figure, we get 37.77, which Fibonacci enthusiasts will recognize as the derivative of 377.

The simple square root, which we all learned in grade school, is an integral hinge on which the markets turn, but because it’s hidden just under the surface, it’s not immediately apparent. Consider the Dow sequence from the March 2009 bottom to the May 2011 high. The high on May 2 was 12,876, after a bottom on March 6, 2009. The 12,876 numeral doesn’t seem so important by itself until we take the square root, 113.47, and discover the market peaked in the 113th week of the rally. That May high also was the day after the United States military killed Osama Bin Laden. The media was expecting a nice rally off the news; however, that was the day markets peaked for the year. Other markets had their own calculations, but this was how the Dow contributed to the peak and led to a grinding 108-day correction, which ended in October.

The all-important BKX also bottomed in early October, and the dog of 2011 has been one of the outstanding market leaders of 2012 (see “Banking on it,” below). How did this happen? One assumption might be that time heals all wounds and that enough time had elapsed from the financial crisis so the investing community finally became interested. 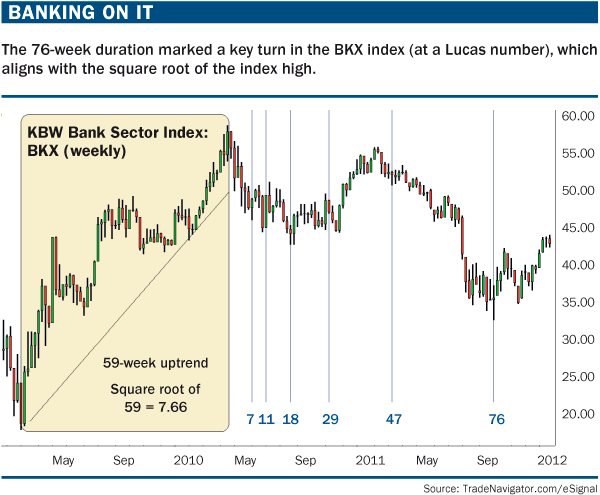 However, the banks peaked at 58.81 in their 59th week of the rally. The square root of 58.81 is 7.66. The peak on April 21, 2010, to the low of Oct. 4, 2011, is exactly 75.85 weeks, and by the plus-or-minus-one rule of market timing, it is close enough to 76. Once again, Gann came through as investors and traders have enjoyed the best rally since the move off the bottom — even if they aren’t exactly sure why it happened. Notice that 76 also is a Lucas time series number and how several interim tops and bottoms match other Lucas numbers.

As hard as this analytical sleuthing appears, the rewards are worth the effort. All the trader needs is to find one key calculation on an important chart and leverage it out to the overall market. If BKX or BTK has a great reading, the entire market usually will respond. The square-root method is the next progression of analysis when simple price and time methods don’t uncover the symmetry. 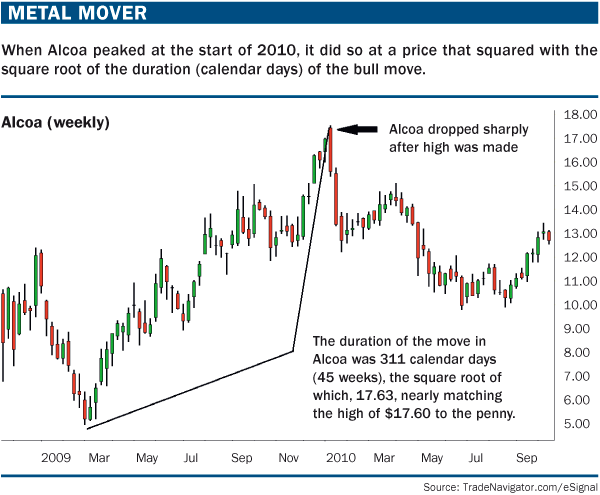 There are no coincidences. Gann and several generations of traders have used time and price analysis combined with square roots successfully. Some consider Gann to be the Holy Grail of trading. It’s not. What must be understood is that until there is a pivot — price action — there is nothing. You can spend a lot of time figuring out where a market is going to turn based on certain symmetries. It’s best to have a rough idea without spending too much time looking for a move that is not there.

For instance, because the SPX bottomed at 666, it doesn’t take much effort to look at 66 days or weeks, nor does it require much effort to figure out the square root is 25.8. In that way, the trader can be loosely aware that at 26 weeks, or 258 days, a turn might occur. But if not, there’s no harm — trades should not be placed in anticipation of Gann moves prior to price confirmation. On the other hand, this methodology becomes valuable when an important price pivot has materialized.

Also, this isn’t a trading method where you look for entries simply because a square root lines up. There is a macro and micro picture. One of the biggest stories in financial markets in 2011 was the expectation of so many equity euro bears that Greece would lead to the next Lehman moment. It never happened because too many traders allowed themselves to be ruled by their emotions and did not really understand the importance of cycles.

Before attempting trade entry, you need an edge that gives you confidence that you are on the right side of the market. Once that is established, you can use your own rules and discipline to find good entries. Gann will help and square roots certainly are an important piece of the puzzle.

Take the same Dow bottom at 6469, and we get a square root of 80.43. The retest of the Great Depression low is recognized by market historians as the second most important low of the 20th century on April 28, 1942. That pivot is 802.3 months removed from the 2009 bottom, which is close enough to consider.

There is a checklist of conditions for discovering time and price squares:

Check the trading or calendar day count.
Look at the high, low and range to see if there is any symmetry. If something materializes, that will be good enough.
Keep an eye out for the requisite price pivots. If no signals emerge, take it one level deeper and work with the square roots.
Once the reversal materializes, you leverage in the trading instrument that flows with your data.

As you perform your due diligence, you might find something else, such as a specific date matching up with the range. Opportunities are out there. There might be something vitally important sitting just below the surface of your price charts. Gann time and price analysis and square roots can get you there.

USD/JPY prints mild losses around 138.70 during the three-day losing streak amid early Wednesday. Even so, the quote bounces off intraday low of late to test the bears.