The expectation of the end of the pandemic in the medium-term horizon leads the stock indexes of the world's major stock exchanges either to the pre-health crisis price levels or to new highs.

However, although stocks and indices are moving higher, the economic collapse, given the damage caused by the pandemic and despite the positive expectations for the end of the health crisis, creates uncertainty. As a result, investors will increasingly focus on the stocks and values of countries that, as the upward trend continues their prices will expand higher than their competitors, while in the event of a downturn they will record the smallest losses.

There is a large set of variables that lead to the selection of these stocks and values of countries that have the characteristic to behave better in upward trends, while they have defensive behaviour in cases of falling prices.

One of the most critical of these variables concerns the research of corporate stocks and the values of countries that are considered Leaders.

Indeed, leading companies and countries behave better than others in times of upheaval, while in volatile times and recession they become a safe haven for investors, and therefore, although they suffer losses, they move defensively offering relative protection.

To find the countries, companies and products that climb the ranking pyramid to reach the leadership level, it is necessary to explore the five different levels at which it is judged whether a country, company, or product can really be considered a Leader.

These five levels are as follows: 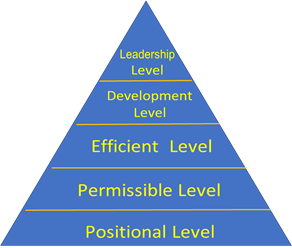 1. Positional level. A company, a product or a country is at the “Positional Level” when people follow them not because they are satisfied but because there are no alternatives. At this level, people spend, invest, and support the least on these companies, products, and countries.

2. Permission level. A company, a product, a country reaches the “Permission Level” when people follow them because they want to, having established a strong relationship with them. This is because a country, a company, or a product meets the needs and desires of the people. This level is achieved when for long time leaders listen, observe, and learn from the people associated with them.

3. Productive level. A country, a company or a product reaches the "Productive Level" as people support them because they trust their efficiency and their innovative approach. So, people are motivated by the attraction of creativity and momentum that is created.

5. Pinnacle level. The “Pinnacle level” is the highest level in the leadership pyramid since people follow a country, a company, or a product because of its existence. For what they have already offered and continue to offer to people, community, and humanity.

Obviously, the fifth level is the optimal level that everyone wants to reach. At this level, countries, companies, and products are leaders not because of their power, but because of their ability to empower others to become the next leaders in their field.

Thus, it is more than obvious that an investment will be more positive and more protective when it reflects the concept of the highest level of leadership.

USD/JPY continues to trade in the negative territory around 109.00

USD/JPY is falling for the fourth straight day on Tuesday. 10-year US Treasury bond yield is down nearly 1%. Broad-based USD weakness doesn't allow USD/JPY to rebound.