Bollinger Bands are a very popular technical indicator that measures the price volatility of a financial instrument. This indicator is invented by the famous technical analyst John Bollinger in the 1980s, and trademarked by him in 2011. Bollinger Bands are showing the volatility of the price by plotting two bands, the upper and lower band, two standard deviations away from a simple moving average (SMA). In general, when the market becomes more volatile, the bands widen, and in less volatile period the bands become narrower. If the bands become narrower and track parallel for an extended time, the price will usually bounce of the upper and lower bands, which take a role of support and resistance lines in sideways trading conditions.

To make this concept clearer, take a look at the following graphic: 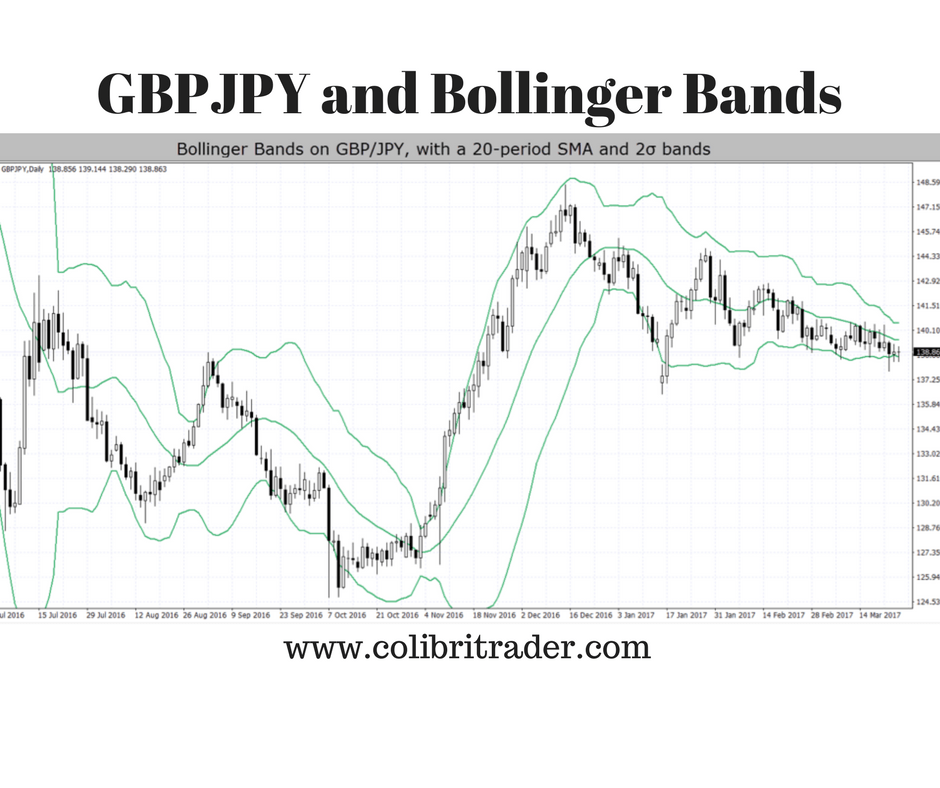 The bands also act as strong support and resistance levels for the currency pair, and the pair rarely trades outside the bands. Traders should not rely solely on Bollinger Bands for trading signals. Best results are achieved when combining with other non-oscillator indicators, like candlestick patterns or chart patterns. Another popular technical-trading approach is combining Bollinger Bands with MACDand RSI. Bollinger Bands are not a standalone trading system, and they don’t provide information about the future direction will take place. They simply measure the price volatility according to standard deviation calculations of the moving average. John Bollinger suggests combining other technical indicators based on price direction for confirming price direction and placing trades.

When the bands come very close together, and the distance from the moving average becomes very small, it is called a squeeze. This market condition implies very low volatility, and traders should be prepared for a possible increase in future market volatility and trading opportunities. The opposite situation, in which the bands are wider apart, means that the market volatility is very high. In this case traders should prepare for a decrease in volatility and eventually consider exiting a position. The following chart shows a squeeze with a succeeding rise in price volatility. 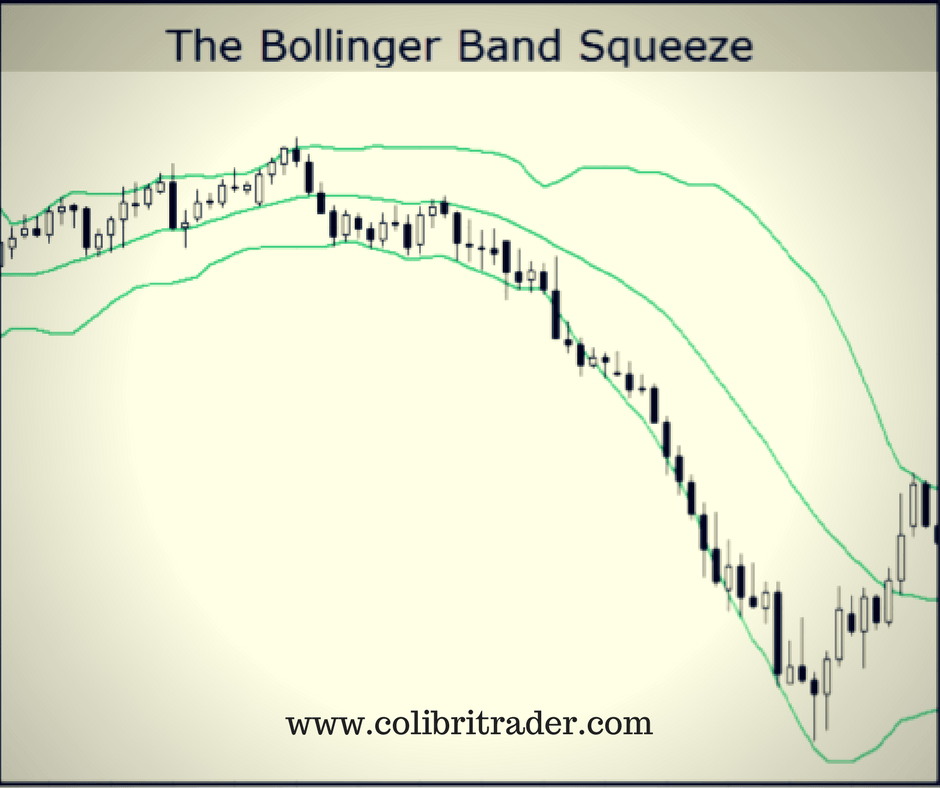 A breakout occurs when the price closes outside the upper or lower band. This situation is very rare, as 90-95% of all market activity is taking place inside the bands, so far as the standard setting for the standard deviation multiplier is used (K=2). A breakout is therefore a major event, but it doesn’t provide a complete trading signal, because the future direction of the price or time when a breakout will occur are unknown. Therefore, John Bollinger suggests using other direction-based indicators for entering a trade. The following chart shows a fake breakout:

Some traders also use a breakout for entering a trade. Because the bands act as support and resistance lines, a breakout of the price outside these bands is considered a potential trading possibility. In the next chart, we show a breakout trade setup on EUR/GBP, with Bollinger Bands (20,2). 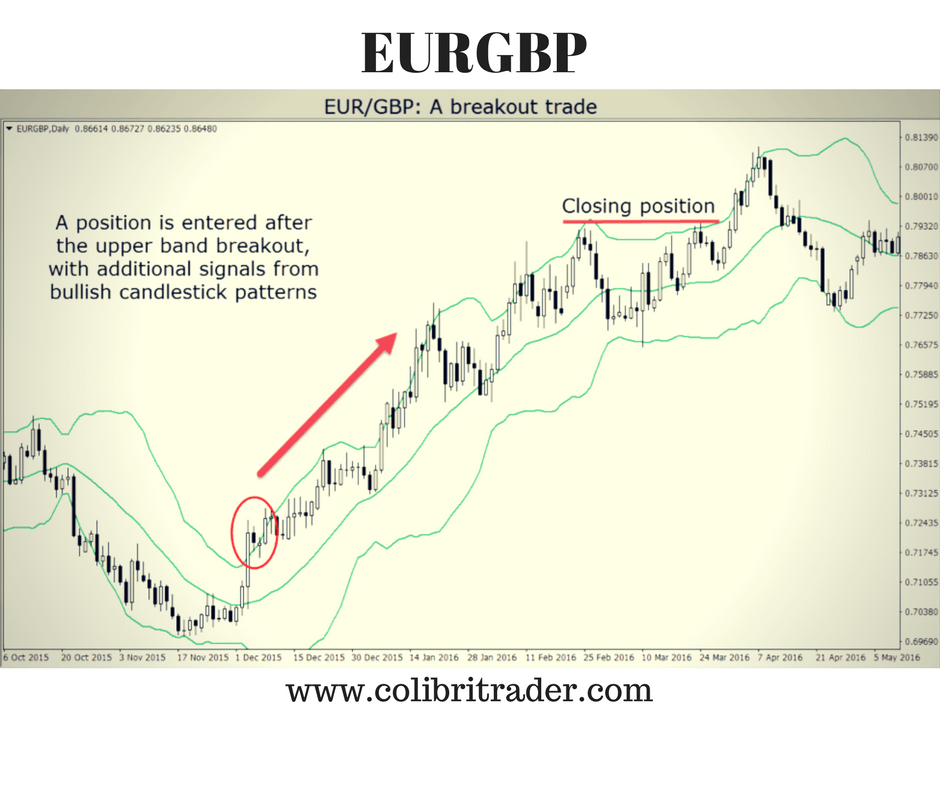 In the beginning of December 2015, the price moved outside the upper band with a long bullish candlestick. To confirm the breakout, a trader should wait for a second signal, which in this case give the following candlestick patterns. The next period after the breakout, a small black candlestick appears, with high and close prices inside the previous candlestick’s body. This is the first signal showing the dominance of buyers. The next period, forming a bullish long-shadow candlestick, and with a close just on the border of the upper band, confirms once more that an uptrend is possibly ahead. Now it is time to enter a long position.

The pair trades the next few months close to the upper band, with a few fake breakouts, and touches quite often the middle band, i.e. the 20-period moving average. The position should be closed either when the price falls to the lower band, or the trend shows signs of exhaustion. In this case, the price failed to make a new higher high on the 24th of March 2016, forming a double top with the upper band acting as a resistance level. This is a level where trader would consider exiting the position.

Another popular strategy based on Bollinger Bands, is riding the bands. During powerful down and uptrends, the price tends to stick to the lower and upper bands, respectively. This shows that there is still enough steam behind the trend, and that it will likely continue in the future. As mentioned before, plotting the bands two standard deviations away from the moving average, means that almost 90-95% of the price-action is contained inside the bands. A price sticking to one of the bands, is therefore a major statistical event which happens in exceptional conditions, like changes in the currency fundamentals. 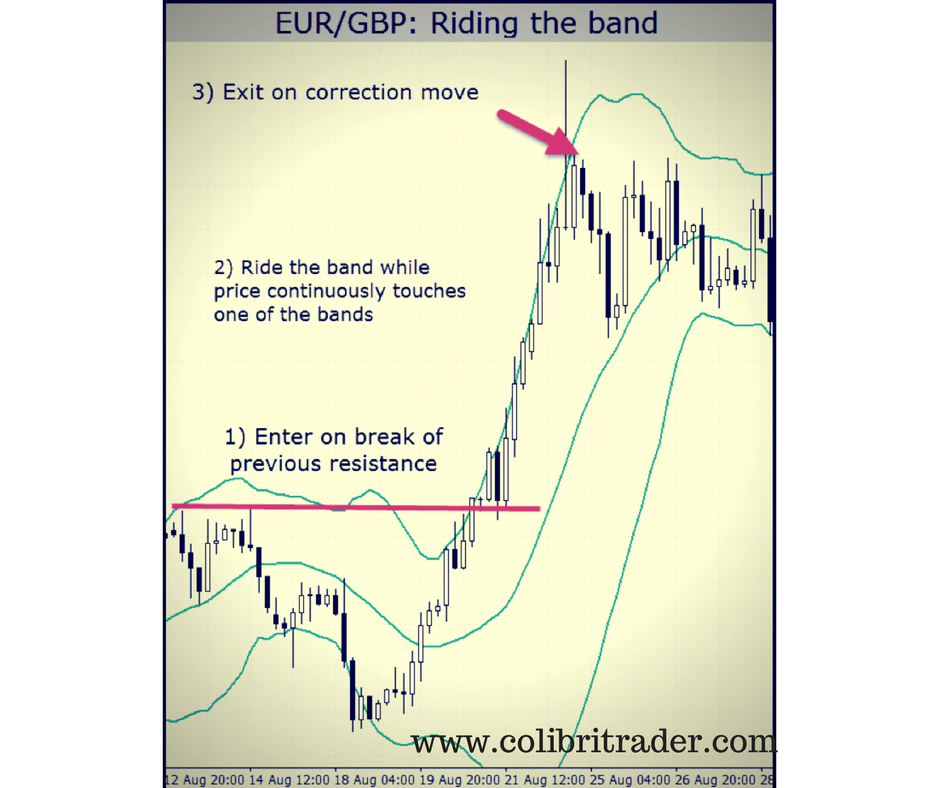 Bollinger Bands are an effective tool in the trader’s arsenal if used the proper way. The upper and lower bands show the volatility of the price, because they are based on standard deviation calculations. About 90% of all price-action takes place inside the bands, and any breakout outside the bands is a major event. The breakout itself is not considered a trading signal, as it provides no clue about the direction or extent of the price movement. Although fake breakouts occur quite often in the standard settings (N=20 and K=2), a trader should investigate if the increasing market volatility has a fundamental background. Bollinger Bands are also not a standalone trading strategy, and should be combined with other technical indicators which rely on a different set of data, like price patterns and trendlines.