The crypto market ends the week at the same crossroads as it began.

The outcome of the battle for dominance is conditioning the market as a whole. Only when critical levels show their reliability, we will have some more visibility in the short and medium term.

The quietness of the market allows us to focus on a fantastic study by Tokenist Media LLC entitled "Comparing Public Bitcoin Adoption Rates in 2020 vs 2017".

The study takes as a reference several studies done in 2017 asking different age groups about their perception of Bitcoin as a store of value in the long term.

The results of the study are spectacular, with substantial increases in the positive perception of Bitcoin in all age groups.

The results obtained leave no doubt that Bitcoin has achieved a privileged status as a store of value, matching and even beating the more traditional options such as Gold, stocks or bonds.

These are some of the most relevant data: 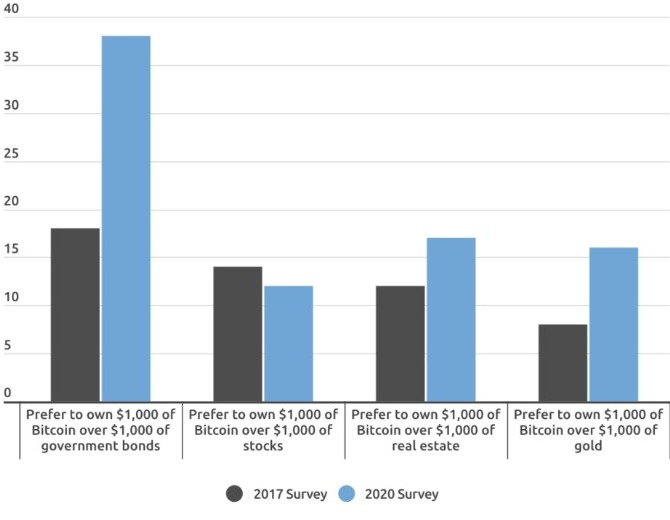 A: How familiar are you with Bitcoin?

A: If you had to choose, which of the following is more trustworthy?

"47% of respondents trust Bitcoin over big banks, an increase of 29% in the past three years.

Male and female respondents both show increased trust in BTC, with both about 17% more likely to trust Bitcoin years ago, but the trust that females place in the currency has started from a lower base."

A: How likely are you to buy Bitcoin in the next 5 years?

"In 2020, 44% of millennials report that they are likely to buy BTC in the next five years.

Female millennials, on the other hand, are far more likely to do so, with now one in three expecting that they will invest in BTC in the short term."

A: How much do you agree or disagree with the following statement: "Bitcoin is a bubble (e.g. the real estate bubble of 2007, the dotcom bubble of the '90s)"?

"The number of respondents who see the value of Bitcoin as a "bubble" has also decreased significantly in the past three years. Just under a quarter of millennials think that Bitcoin is a bubble, though exactly 50% of the over-65 age group believe it is.

In 2017, female millennials were particularly sceptical about the long-term stability of BTC, with nine in ten of this group either feeling it was a bubble, or that they didn't have enough information to know."

I think it's imperative to note the increased positive perception of Bitcoin by the millennial female participant's segment.

The ETH/BTC pair is currently trading at the price level of 0.0245 while remaining within the lateral range of the past few weeks.

The MACD on the daily chart continues to cross the line and slightly increases the slope and openness between the lines. The most likely development in the short term is bearish.

The DMI on the daily chart shows bears taking advantage of the bullish trend. The buy-side fails to break the ADX line and moves down, giving up its options to lead the pair for the time being.

The BTC/USD pair is currently trading at the price level of $9355 as it slowly slides towards the base of the expansive triangle structure that is its current environment. The narrowness of the scenario over the next few sessions could lead to increased volatility.

The MACD on the daily chart reaches the zero level of the indicator where it could find support to look for the ceiling of the current scenario at $10200. The loss of ongoing support would take the Bitcoin to the $8700 level and risk the overall uptrend.

The DMI on the daily chart shows bears controlling the BTC/USD pair but showing a very flat and lacking strength profile.

The ETH/USD pair is currently trading at $229.6 at the beginning of a path that seems inevitable towards the $220 level with the possibility of an extension to the $200 level.

The MACD on the daily chart increases the bearish trend line and could accelerate the declines in the coming days.

The DMI on the daily chart shows bears supported by the ADX line, from where they could bounce up and signal a new downward trend. The bears are still down and are not confident that their time has come.

The XRP/USD pair is currently trading at $0.1891 while it continues to be supported by the primary trend line from the March lows.

Ripple has no margin at the bottom, and any slippage would be too damaging, almost definite, to continue to consider Ripple a reliable investment.

The MACD on the daily chart is showing a tendency to expand downwards, which would lead to the price of XRP/USD below the main trend line and possibly to new lows for the year.

The DMI on the daily chart shows that the bulls have no intention of challenging the bears for the lead, even though the sell-side has lost support from the ADX line and should continue to lose strength.