Meitu, a Hong Kong-based tech company, announced on Wednesday the acquisition of 16,000 ETH and 386 BTC. The second installment of its investment was worth $50 million in total and came via Meitu’s subsidiary Miracle Vision.

Meitu acquires $28 million worth of Ether

Considering Meitu’s previous Ethereum purchase, which cost $22.1 million for 15,000 ETH, the software company now owns a total of 31,000 ETH. This investment has already netted $6 million or 10% in profit at the time of writing.

Regarding its full-fledged investment in cryptocurrencies, the company said that its decision was in part driven by the increase in money supply by central banks around the world.

While Meitu has become one of the first companies in the East to follow Tesla, Square, and MicroStrategy more of such announcements might follow, especially considering the important milestones surrounding the smart contracts platform.

The first significant step ahead is the change from Proof-of-Work (PoW) to Proof-of-Stake (PoS). While this topic was contentious initially, the number of tokens accumulated in the ETH 2.0 deposit contract has now hit a staggering 3.5 million worth $6.4 billion.

Additionally, the recently launched Ether futures on Chicago Mercantile Exchange (CME) has also seen 695,550 ETH contracts traded to date, which shows that investors are interested in the smart contracts platform token and its bullish potential.

Ethereum price has been forming a series of higher highs and higher lows, resulting in an ascending parallel channel. Although ETH sliced through the pattern’s lower trendline, the technicals indicate a bullish outlook.

The 100 four-hour moving average (MA) is rising above the 200 four-hour MA around the $1,710 level. If successful, this will represent a “golden cross,” suggesting an increase in the short-term bullish momentum. Interestingly, this cluster coincides with the 78.6% Fibonacci retracement level.

All of the above, including the 50 four-hour MA at $1,811, provides a strong foothold for a quick upswing in Ethereum price.

A likely course of action for the buyers would be to push Ethereum price towards a retest of the all-time high at $2,042. If the bullish momentum persists, then ETH could climb towards $2,465 or even $3,000, which coincides with the 127.2% and the 161.8% Fibonacci retracement levels, respectively. 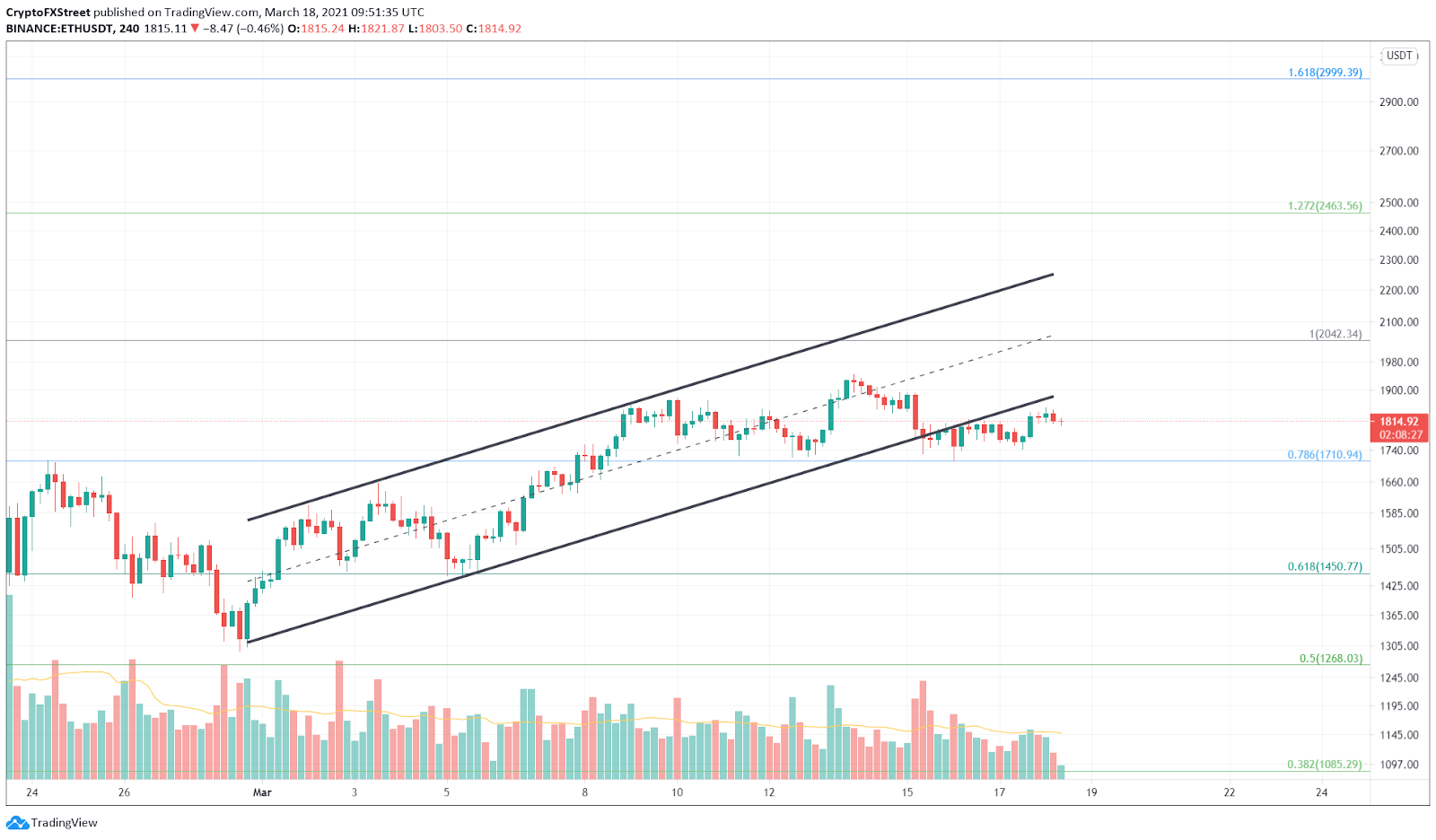 Adding credence to this outlook is IntoTheBlock’s In/Out of the Money Around Price (IOMAP) model. This metric reveals a perfect concoction for an upswing, a combination of a stable demand barrier and little to no resistance.

Transaction data shows that roughly 1.1 million addresses hold nearly 14.71 million ETH at an average price of $1,787. Hence, any short-term bearish momentum will likely be absorbed by the investors present here.

Additionally, the number of addresses holding between 100,000 to 1,000,000 ETH has increased by 7%, which shows that whales are not concerned about the recent price action but are accumulating the pioneer altcoin.

While everything seems to be bullish for Ethereum price, investors should be wary of a drop below the immediate support level at $1,729. The downswing would put many investors “Out of Money,” triggering a sell-off that could push ETH as low as $1,500.