Cryptocurrency listings on exchanges and particularly on large platforms like Coinbase and Binance are a big deal. The crypto market is accustomed to a new terminology referred to as the “Coinbase effect.” This new term defines what occurs to any cryptoasset listed on the San Francisco-based cryptocurrency exchange, Coinbase. The “Coinbase effect” has affected the price of many cryptocurrencies over the last years, such as XTZ, LINK, OMG or ATOM. Coinbase listings have the highest average return of any events on the crypto market.

Coinbase is the most prominent cryptocurrency exchange platform in the United States and many regions worldwide. However, it stands out for its relatively limited asset offerings, which adds credibility to new listings. You can think of it as affirmative action, which brings out the hype.

The listings on Coinbase in 2020 give an insight into the impact of the exchange on cryptocurrencies. Therefore, it is essential to look at some of the assets listed in 2020 30 days before and on the actual trading day. The chart below shows the performance of some of the digital assets listed on Coinbase platforms last year. 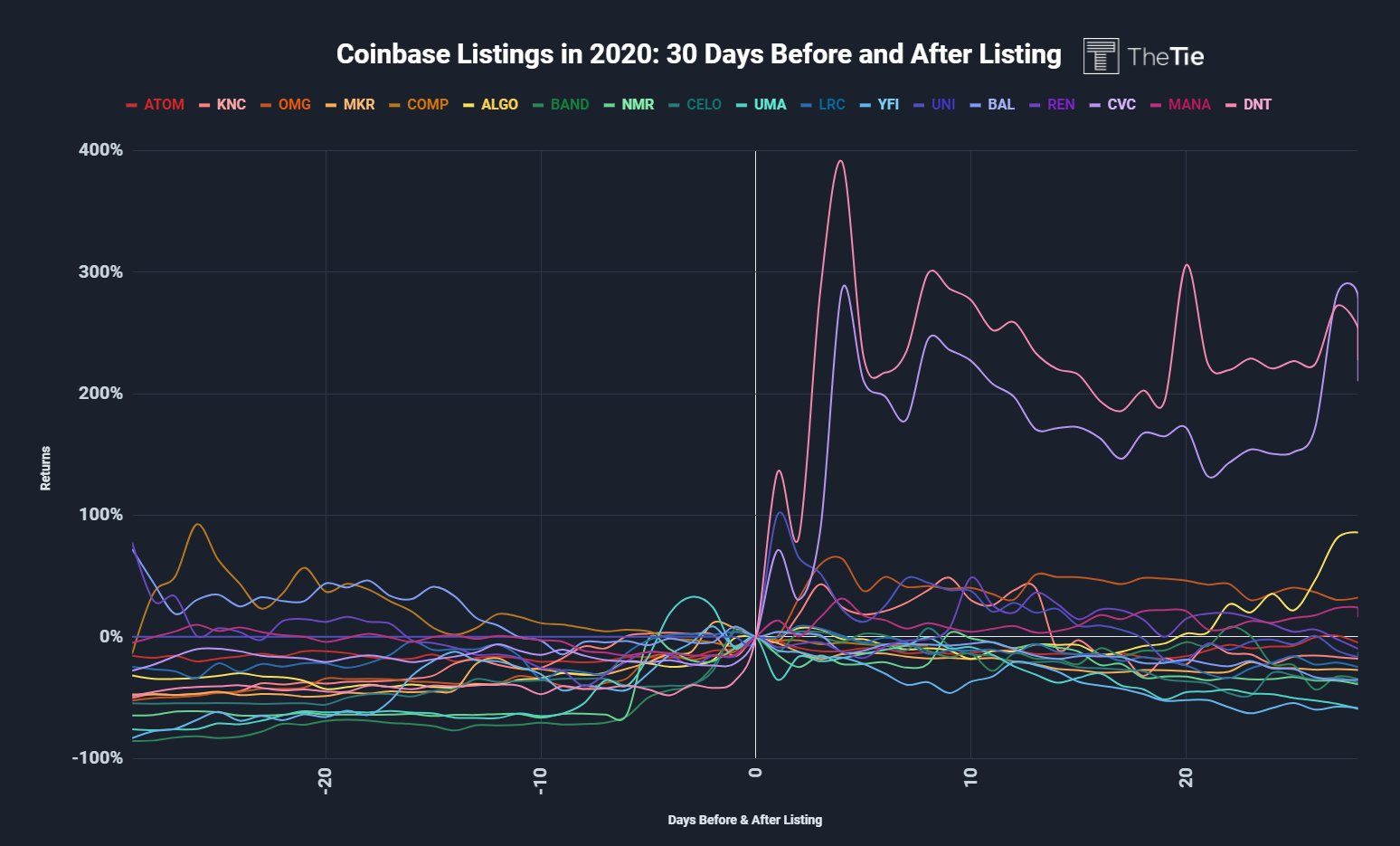 These assets stood out in 2020 and why

According to research done by The TIE in collaboration with eToroUS, Civic (CVC) and district0x DNT) saw their values more than triple after listing on Coinbase. Keep in mind that most returns often fall in the range between 100% and -100%. These two assets are likely to give insight into the ‘Coinbase effect.”

Civic was listed on Coinbase simultaneously with tokens such as Decentraland (MANA) and district0x (DNT). Following the announcement of the intended listing, Civic rallied by nearly 190%. Intriguingly, the rally continued following the commencement of the actual trading (which occurs when an asset has attracted the liquidity threshold set by Coinbase).

The daily chart illustrates a total increase of 650% from the announcement to the days following the actual trading. In other words, CVC grew by roughly 460% after it was listed on Coinbase. At the time of writing, Civic is trading at $0.08, down from the 2020 peak ($0.17) (Coinbase effect) and $0.234 (the crypto bull cycle).

After Coinbase announced to the community that district0x would be available as an instrument of trading, the token shot up 431%, as illustrated on the chart. Like Civic, the rally continued after the listing, leading to a total growth of $905% to exchange hands at $0.084 (2020).

Although there was a correction several days after the listing, support was embraced at $0.04 before the bull cycle of 2020/2021 kicked in, sending it to $0.225 in January. Meanwhile, DNT is trading at $0.115 in the wake of a correction from the all-time high.

As seen with CVC and DNT, some assets continued to rally for 30-day after the actual trading. Other tokens that have shown similar growth patterns are OMG Network (OMG), Algorand (ALGO), and Decentralized Mana (MANA). 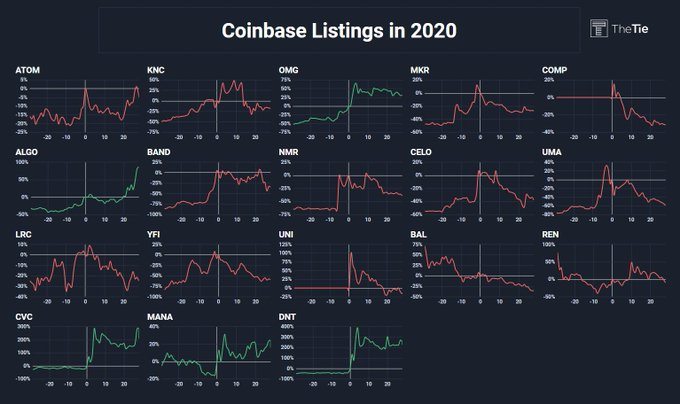 Coinbase listings in 2020 and their performance

A post-listing rally is not a guarantee

A keen look at the assets listed on Coinbase in 2020 shows that some cryptoassets tend to rally after the announcement but drop following the actual trading has started. Some may think that this is insider trading, but this is not the case.

Of all the 18 assets that had the privilege to be listed, ten had announcements done an average of six days before the actual trading. The announcement period gives traders a window of opportunity to beat the herd, leading to what is known as pre-listing gains. This means that by the time these assets are available for trading, the effect is almost non-existent, leading to either minimal price increase or even selloffs. 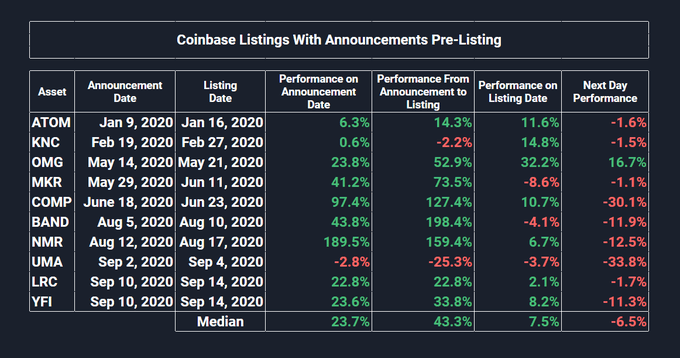 However, the remaining eight assets got listed without announcements, thus attracting double-digit gains on the actual trading day. These assets shot up by an average of 33%, and they include district0x, Uniswap (UNI), and CELO. The assets listed by surprise have no pre-listing gains but tend to rally four times their values before listing. These same assets have minor pullbacks the day after their listings. 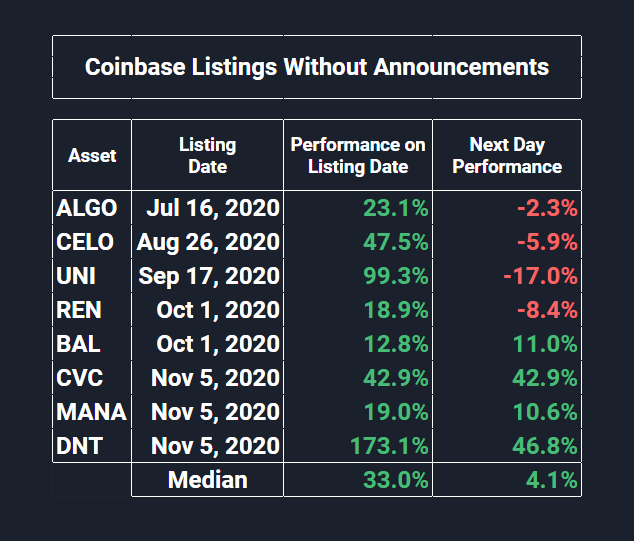 The impact of Coinbase listing on price

For assets listed following an announcement, data shows that they give investors an excellent opportunity to buy low and sell high—an average of 43% in gains within the average six-day window. The pre-listing announcement also increases social volume, with related tweet volumes spiking by as much as 5,000%. DNT emerged as the best performer, with tweet mentions going up by 5,939%.

Polkadot price welcomed the Coinbase Pro announcement, delivering the highest daily volume for a positive day since May 26 and the largest daily gain since May 24. The resulting spike above the 200-day SMA was a bullish development, but it faded when DOT pressed against a longstanding barrier. The outlook is neutral, waiting for further catalysts to overcome the notable resistance. Keep reading