Bitcoin (BTC) slid under $33,000 for the first time in over a week on Jan. 21 as selling pressure gathered to drive price action lower.

Data from Cointelegraph Markets and TradingView showed BTC/USD continuing its downtrend on Thursday, dropping 7.% on the day and failing to bounce off $33,000 support. 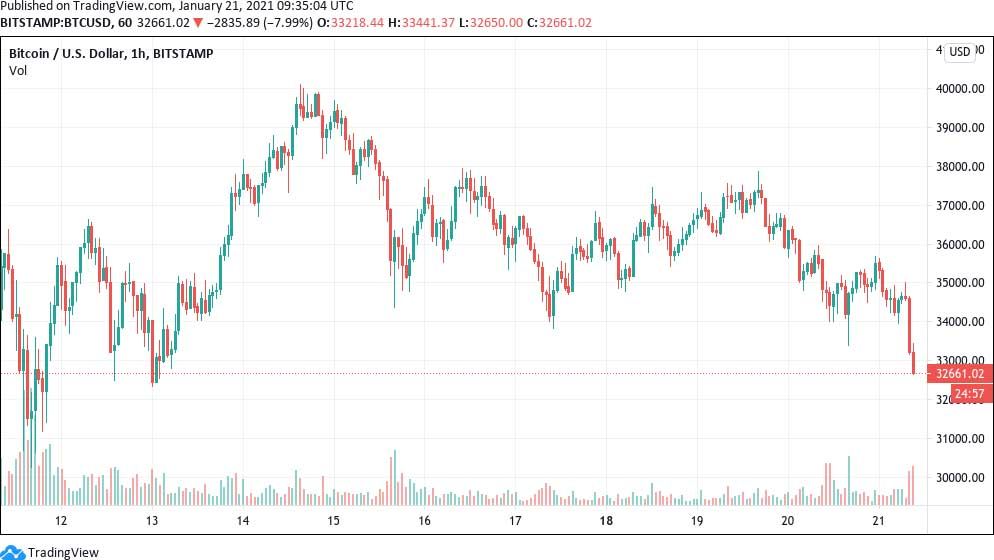 The latest move, which brings Bitcoin down over 13% versus its highs from Tuesday, came amid increased selling at Coinbase Pro, the professional trading arm of United States cryptocurrency exchange Coinbase.

As Cointelegraph reported, major spikes in volume at Coinbase Pro had accompanied price volatility in recent weeks. This time, it was a dip in the so-called "Coinbase Premium" which signalled selling was underway — the difference in price between the BTC/USD pair at the venue and others suddenly decreased.

"It seems $BTC sellers came from #Coinbase. Coinbase Premium Index has been a negative value since an hour ago," Ki Young Ju, CEO of on-chain analytics resource CryptoQuant, summarized on Twitter uploading the accompanying chart.

Coinbase whales might want $BTC to go lower for consolidation."

A day earlier, Ki had highlighted a corresponding increase in deposits across exchanges from whales, indicating a potential desire to trade or sell BTC at prices at or below the mid-range of its trading corridor between $30,000 and $40,000.

Battle of the Bitcoin whales

Another trend since Bitcoin began ascending to new all-time highs was a transfer of wealth from small investors to whales, the latter buying up the supply during every price retracement.

Despite the sell-off, it was buyers hitting the headlines this week, chief among the investment giant Grayscale, which fixed its biggest-ever one-day BTC purchase worth more than $600 million. In the 24 hours to the end of Wednesday, the company increased its balance by a further 8,000 BTC — far more than the supply being added to the market by miners.

At a virtual conference this week, CEO Michael Sonnenshein outlined nation state adoption of digital assets and increased interest from financial advisers as two of the major trends which believes will characterize 2021.