Cardano price rebound from the 200-day simple moving average (SMA) began with a doji candlestick pattern and has since evolved into two meaningful days higher with ADA now testing the intimidating 2018 high of $1.40. ADA may be poised for a period of oscillating price action around $1.40, but the cryptocurrency may have achieved a final corrective low.

In the days proceeding the May 23 decline, Cardano price was indecisive and directional intentions were opaque, but the June 21 crash of 17.66% resolved the horizontal pattern and shattered the 2018 high of $1.40. The notable decline of June 21 was followed by another sizeable decline into the 200-day SMA at $0.98 before ADA closed the day with a doji candlestick pattern.

The doji candlestick revealed a high level of indecision, but it also hinted at a potential trend change. The trend change was confirmed on June 23 when Cardano price rallied above the doji high, setting up today’s stand-off between ADA and the 2018 high. It is a battle the altcoin lost in February, March and April of this year.

Daily ADA volume has not been energetic the last two days, suggesting Cardano price may undergo a period of consolidation before unlocking $1.40. However, the ability of the digital asset to avoid printing a new correction low was a departure from the majority of altcoins, establishing a level of relative strength that may accelerate a push higher.

If the rally continues unabated, Cardano price will be engaged by firm resistance at the merger of the anchored VWAP from April 23 at $1.61 with the 50-day SMA at $1.62 and the Ichimoku cloud, delivering a 15% return from $1.40.

A potential short-term scenario for Cardano price is a new trading range between $1.40 and $1.62. Nevertheless, a daily close above $1.40 will be vital in ascertaining the specific intentions of ADA. 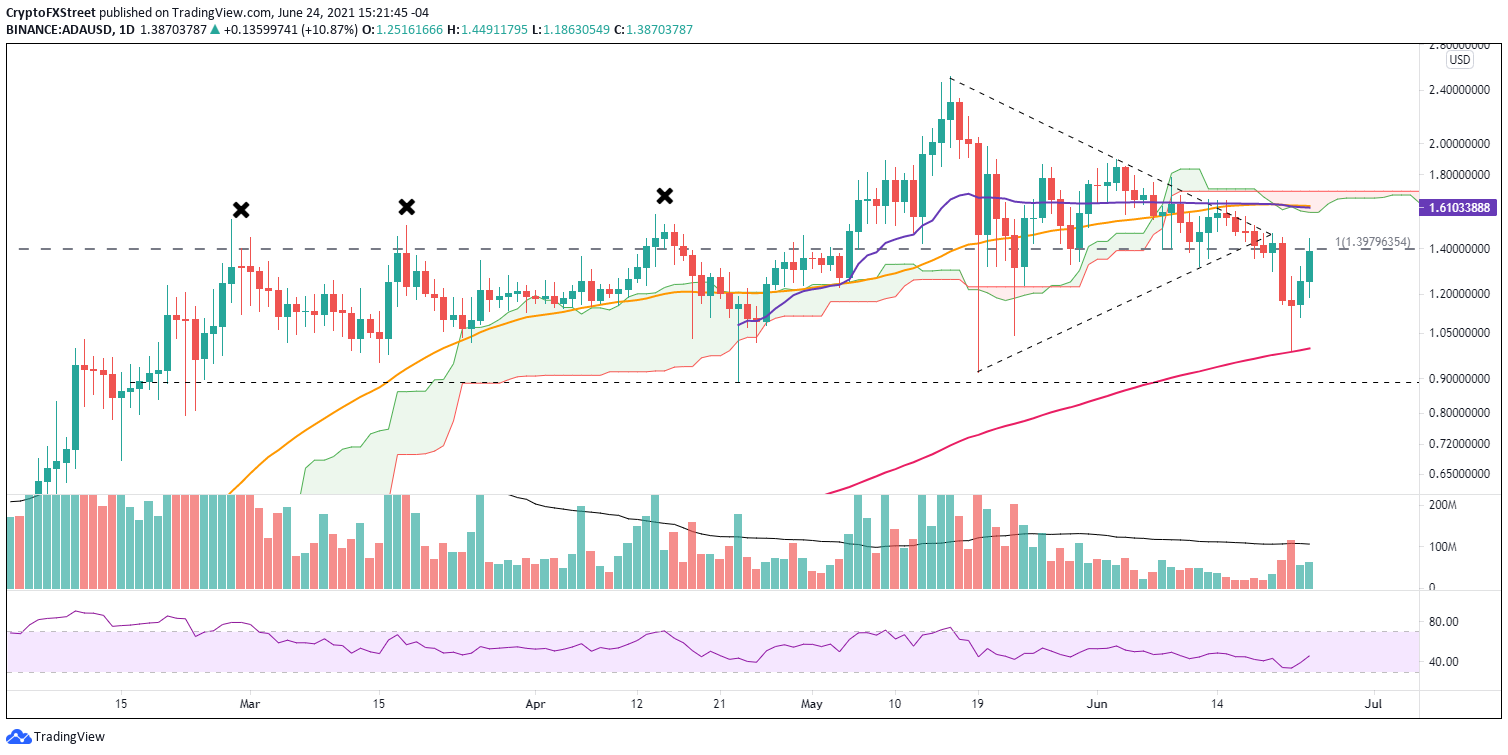 Cardano price is not entirely immune from the tribulations of the broader cryptocurrency market. Thus, a new avalanche of selling in digital assets and a strong rebuttal at $1.40 could press ADA to revisit the 200-day SMA and eventually the May 19 low of $0.91.

Cardano price is still vulnerable to reversion, despite the 47% rebound from the June 22 low, particularly when ADA is confronting a strategic price level like the 2018 high. Nevertheless, the green token has again displayed relative strength, elevating it to a different category of altcoin and a potential trading range, as cited above.