Cardano price has shown extraordinary performance over the past three weeks as it more than doubled in value. This growth has managed to ignore all the sell signals and rise exponentially to where it currently stands.

ADA is just a few percentage points away from retesting the all-time high and even setting up a new one.

In a recent announcement on August 13, the head of delivery for Cardano, Nigel Hemsley, said that the Alonzo mainnet hard fork would be ready on September 12.

This upgrade will bring the smart contract capabilities to the Cardano blockchain. Although ADA is also called the “Ethereum killer,” the network lacked smart contract functionality, a major drawback.

However, during the recent Cardano 360 episode, Hemsley stated,

Once we hard fork the testnet it gives us this period of stability where we can test it and so can exchanges… We will submit a proposal for a mainnet hard fork and also patch you with our Plutus application backend so we can have a complete smart contract release ready for people to use, ready for the Alonzo hard fork on Monday, September 12.

This update is good news for users who have been waiting with bated breath for the release of the smart contract capability on Cardano for a long time.

With the implementation of smart contracts and multi-asset functionalities, ADA is close to expanding its already large ecosystem of users. Depending on how the mainnet hard fork goes, investors can expect the developers to flock around this new functionality or stay away from it.

On a similar note, SXSW EDU is conducting an educational conference to explore the possibilities and educate people on Non-Fungible Tokens (NFTs) on the Cardano and other blockchains.

Cardano price has a chance to retest all-time high

Cardano price has rallied 121% between July 20 and August 15 and is currently hovering above a supply zone’s upper limit at $2.16. Out of this massive and exponential growth, ADA rallied 23% on or around the time of the Alonzo announcement.

This thrust pushed the so-called “Ethereum killer” to slice through a supply zone extending from $1.83 to $2.16. If ADA manages to bounce off $2.16 and stay above it, it will confirm a successful flip into a demand zone. Such a move will promote more gains and a retest of the all-time high at $2.46 in some cases.

However, ADA might not be able to sustain this uptrend and might undergo a minor correction. The Momentum Reversal Indicator (MRI) has put up warning signs in the form of a yellow down arrow on the 12-hour chart. If ADA continues to rally, this index will flash a sell signal in the form of a red ‘one’ candlestick that forecasts a one-to-four candlestick correction.

Therefore, investors need to watch out for ADA for a move in either direction. 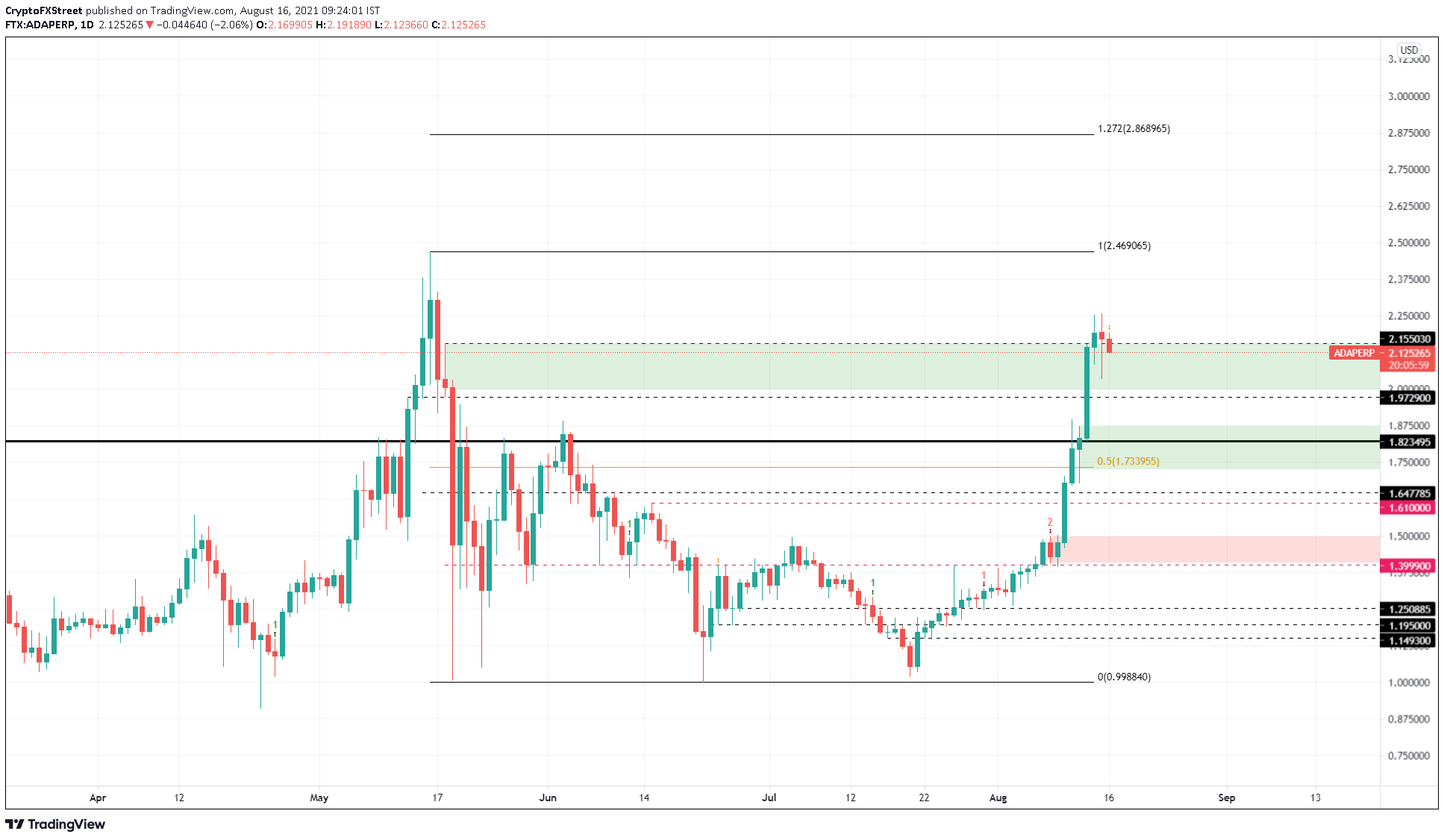 If the buying pressure overwhelms the bearish momentum, ADA will stay above $2.16 and make a run at the all-time high at $2.46. If the bid orders continue to pour in, Cardano price might set up a new all-time high at $2.87, coinciding with the 127.2% Fibonacci retracement level.

But a breakdown of the $1.82 support barrier will invalidate the bullish thesis and potentially confirm a reversal of the trend.