Cardano price has been able to surge above $2.00 for the first time since May 19 on the news of the Alonzo upgrade date. The network’s upgrade will take place on September 12, as revealed by the development company behind the blockchain, IOHK. ADA reached the target of a prevailing chart pattern and is beginning to retrace.

Cardano price to face a stiff hurdle ahead

Cardano price was able to rally off of the announcement of the Alonzo upgrade date. Previously,  skeptics have been speculating on whether the network would be able to support smart contracts by the end of September.

The team behind the Cardano stated that the blockchain is targeting September 12 for the update, which will bring smart contracts to the network through a hard fork combinator event.

The Alonzo upgrade will bring in advanced smart contract solutions and decentralized finance protocols, becoming one of the main competitors against Ethereum.

Following a 40% gain in the past week, Cardano is now the third-largest cryptocurrency by market capitalization, recording over $66 billion.

On the 4-hour chart, Cardano price formed a bull flag that started on August 9, targeting a 27% rally according to the measurements from the flag pole. ADA eventually reached the bullish aim, reaching a high of $2.24. 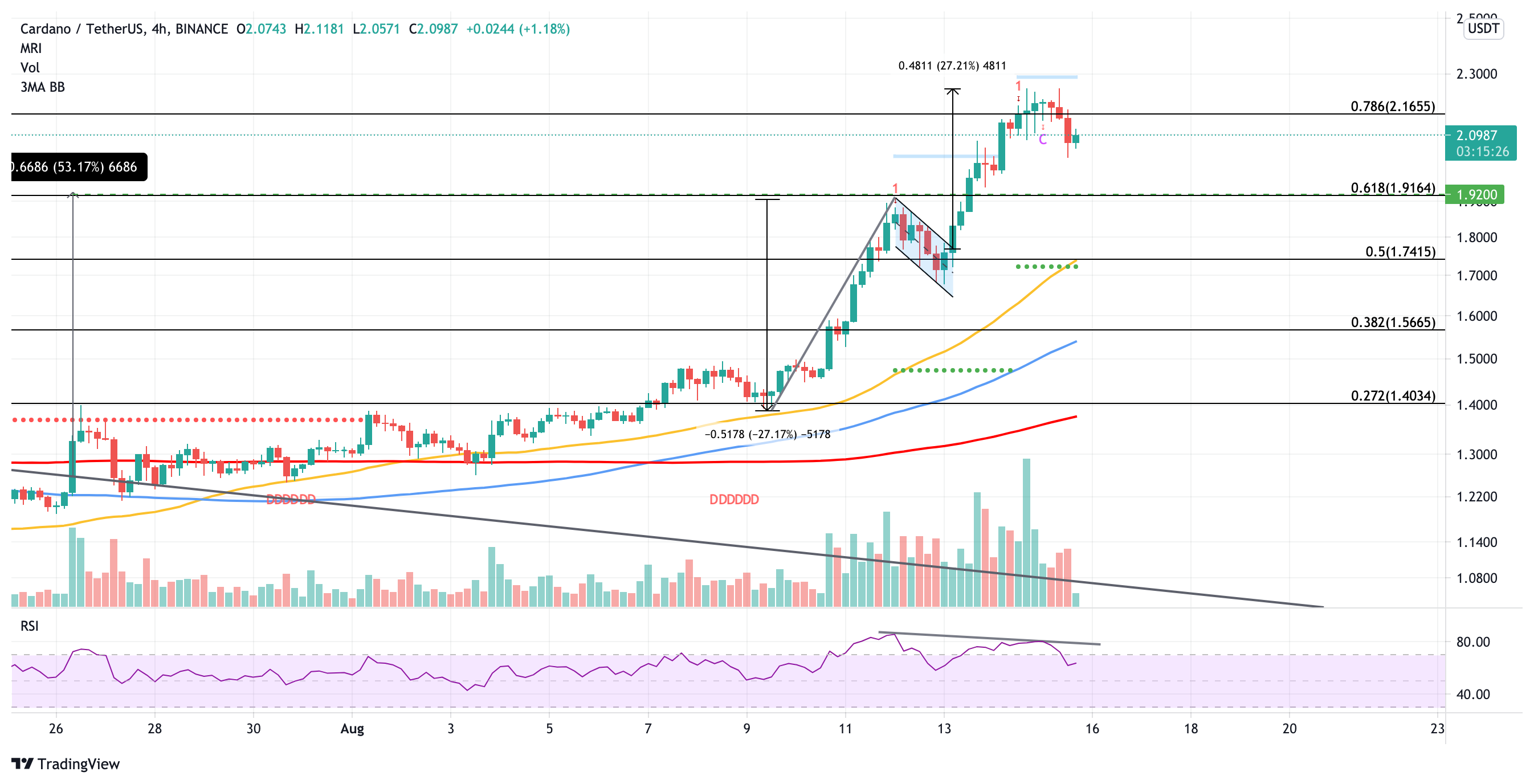 Following recording a multi-month high, Cardano price appears to be headed for a correction after ADA was rejected by a critical level of resistance at the 78.6% Fibonacci extension level at $2.16.

The IntoTheBlock’s In/Out of the Money Around Price (IOMAP) metric also indicates that the aforementioned level of resistance seems to be a strong obstacle for Cardano price going forward, with a large cluster of 72.860 addresses that bought 1.58 billion ADA at an average price of $2.17.

Cardano price may retest crucial levels of support before continuing its rally. The Momentum Reversal Indicator (MRI) also printed a top signal, indicating that ADA may have recorded its local top and a pullback is imminent.

Adding to the bearish outlook is the negative momentum divergence between the RSI and price.

Should Cardano price continue to fail to galvanize investors’ enthusiasm, ADA will find meaningful support at the 61.8% Fibonacci extension level at $1.92, coinciding with the target given from the previous descending triangle chart pattern, adding strength to this level of defense.

Further decline is not expected at the moment, but should Cardano price witness a spike in selling pressure ADA may discover support at the 50% Fibonacci extension level at $1.74, corresponding with the 50 four-hour Simple Moving Average (SMA) and the support line given by the MRI.