As Bitcoin (BTC) set another new all-time high earlier this month at over $61K, its price has gotten many people talking. With large players entering the market every other day from Visa and Mastercard to Tesla, BNY Mellon, Morgan Stanley, and Meitu, institutional adoption has been firmly confirmed. Add to that unprecedented monetary dilution to fund fiscal stimuli that's eroding the value of fiat currencies and we have the perfect storm for BTC price to take off in earnest. But that's not the only number going up.

As BTC price (at the time of writing) looks to be recoiling to surpass the $60K barrier once more after the Federal Reserve announced it would likely keep its monetary policy loose with interest rates close to zero until at least 2023, BTC hash rate is also hovering near its all-time high of over 160 million TH/s, according to Blockchain.com. 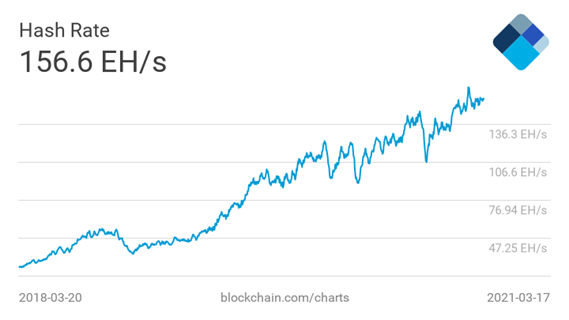 This is a very bullish sign as it shows that miners are betting on Bitcoin, adding more power and investing in more mining equipment to add hash rate to the network. Hashrate also reflects the security of the Bitcoin network; the more computing power behind it, the more resistant to attacks or manipulation from large attackers like nation states.

While Bitcoin has never suffered a double-spend attack of any kind, it's not an impossibility. However, with so much computing power behind it now, that looks increasingly unlikely. In fact, Bitcoin has been strong enough to resist such an attack for a long time now. Who doesn't remember that famous response to a journalist by Andreas Antonopoulos back in 2015?

He said that Bitcoin had already reached a level of computing power whereby to attack it would require a massive covert operation of chip fabrication and a coordinated assault that would only give the perpetrator dominance over a block for 10 minutes before they were discovered and kicked off the network. That was almost six years ago.

Bitcoin miners are earning more than ever

Despite the Bitcoin Halving in May 2020, that slashed the block reward in half reducing the profits for miners, thanks to the epic rise in BTC price along with increasing transaction fees, Bitcoin miners are earning more than ever – close to 1 BTC per block in March 2021 - making it a new all-time high.

This is an excellent sign for the Bitcoin network and an added incentive for more miners to compete for block rewards and add their hashing power, making Bitcoin even more robust and secure.

Rising transaction fees on the Bitcoin network can be something of a double-edged sword. Rising fees mean that users have to pay more when transacting with the Bitcoin network, however, comparative to the volume of funds being transferred, an average fee of $22.7 per transaction is often a drop in the bucket. Furthermore, thanks to network upgrades such as Segregated Witness (SegWit) and layer 2 solutions like the Lightning Network, transaction fees have been greatly reduced.

According to data from BitInfoCharts, the average transaction fee remains much lower than at its heights in December 2017 at $50. High transaction fees on the Bitcoin network can even be seen as a good thing as it shows that network adoption is growing – and TX fees contribute to miner revenue as well. Moreover, users wishing to transact in smaller amounts can make use of layer 2 solutions like Lightning and Liquid.

A rising number of Bitcoin addresses

It's not only price, hash rate, miner revenue, and transaction fees that are going up. The number of unique Bitcoin addresses is also going up. Data shows that despite the bear market that followed Bitcoin's 2017 bull market high, addresses went steadily up and are now almost reaching new all-time highs again.

While the number of addresses isn't entirely synonymous with the number of users (one user can create as many addresses as he or she wishes), services such as exchanges may use just one address to hold thousands of users' funds.

Bitcoin's price is not the only thing going up. In fact, this March also saw open interest on BTC futures hit a record high at $22.5 billion. All these trends are bullish for the number-one cryptocurrency that has shown that, regardless of the price peaks and corrections, the network continues to grow as HODLers, miners, and traders are in it for the long haul.