Bitcoin price surged above $50,000 for the first time since mid-May, surging 72% from the July 20 low. Despite the massive move in the bellwether cryptocurrency’s price action, blockchain analytics firm Glassnode pointed out that the transaction volumes are low.

According to Glassnode, on-chain activity for Bitcoin has not responded to the bullish price action, as BTC transactions remain at historically low levels of 175,000 to 200,000 transactions per day.

In the past five years, the low levels have been seen during the 2016 to 2017 bull market and the subsequent pullback, and the 2018 to 2019 bear market when Bitcoin dropped over 85% from its high.

Currently, after almost three months of consolidation, transaction volumes are also depressed, as the Bitcoin network is recording roughly $18.8 billion in daily volume. Glassnode highlighted these levels are 57.6% lower than the May capitulation event.

In addition, there was a noticeable increase in older coins getting sold. Glassnode explained that since the spending was of low coin volume, it could be for strategic de-risking rather than a loss of conviction in the bullish outlook on Bitcoin.

During the recent Bitcoin recovery toward $50,000, the social sentiment around the leading cryptocurrency has stayed relatively mild, according to analytics firm Santiment.

When comparing the Bitcoin mentions with other cryptocurrencies, the bellwether digital asset has not gained social dominance during its rally to $50,000, unlike previous rallies.

Interestingly, the mood around BTC mentions has also declined throughout August, suggesting that retail investors were getting more bearish as Bitcoin price edged closer to the $50,000 mark.

The lack of attention on Bitcoin could be good for the cryptocurrency, as historically, surging social volumes and extreme bullish sentiment have usually led to price tops, according to Santiment.

Bitcoin price steadies before the next climb

Bitcoin price sliced above $50,000 on August 23, rallying toward the 61.8% Fibonacci extension level. However, BTC is likely to move sideways steadily before another massive move is to be made.

On the upside, the next target for Bitcoin price is at the 61.8% Fibonacci extension level at $50,938 on the daily chart. The Arms Index (TRIN) also provides a bullish bias for the leading cryptocurrency, suggesting an overall greater buying volume than selling volume. 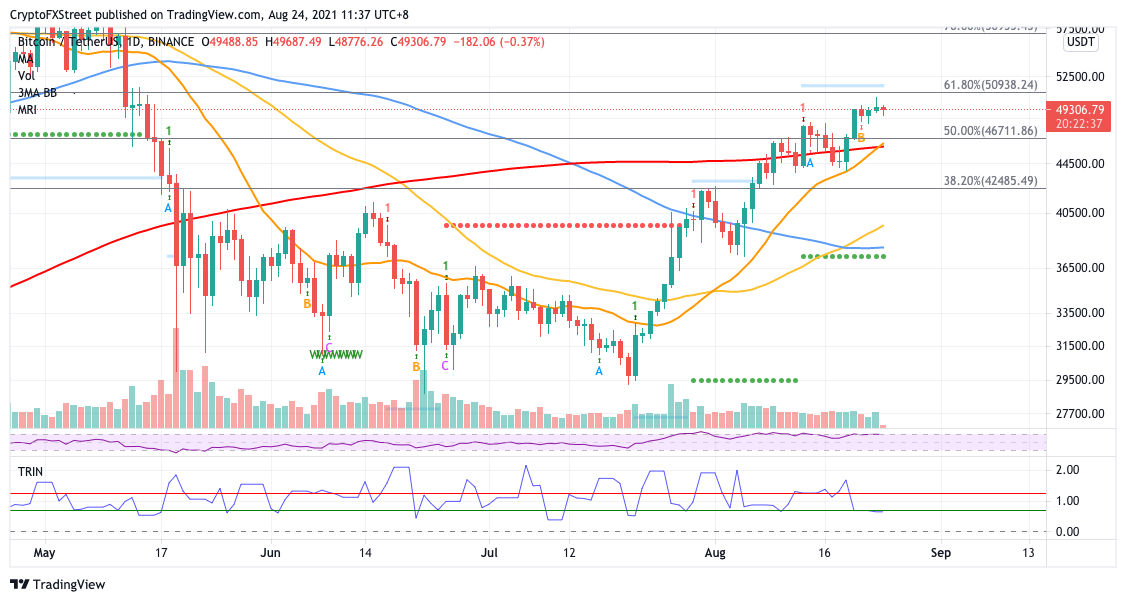 Bitcoin price must also slice above the resistance line given by the Momentum Reversal Indicator (MRI) at $51,529 before it can target bigger aspirations. A spike in buying pressure could see BTC target the 78.6% Fibonacci extension level at $56,955 in the longer term.