Bitcoin Cash appears to be struggling to hold at $500 in the wake of rejection from highs around $540. A glance at the 4-hour chart highlights increasing overhead pressure. If BCH closes the day under $500, significant downward pressure will come into the picture.

BCH has in the past few days recovered from Monday’s drop to $400. The momentum was built within a rising wedge pattern. The correction from the weekly high at $540 is testing the lower trendline of the pattern. A break below the lower trendline could call for more sell orders as Bitcoin Cash dives toward $400.

Notably, breakdowns usually occur before the trendlines converge. The typical correction is generally confirmed by decreasing volume (highlighting a divergence between volume and price). Downward price actions are usually fast and drastic.

The confluence Detector validates the bearish outlook by presenting multiple resistance zones ahead of Bitcoin Cash. For instance, an initial hurdle is highlighted at $511 by the SMA five one-day.

If Bitcoin Cash breaks this zone, the uptrend could be stopped by the most robust barrier at $517. This zone is home to the one-day 38.2% Fibonacci level and the 1-hour Bollinger band middle boundary.

On the downside, little support has been provided for Bitcoin Cash, where the only formidable anchor lies at $507. This confluence zone hosts the 10 SMA 4-hour, the five SMA 1-hour, and the 15-minutes previous low. 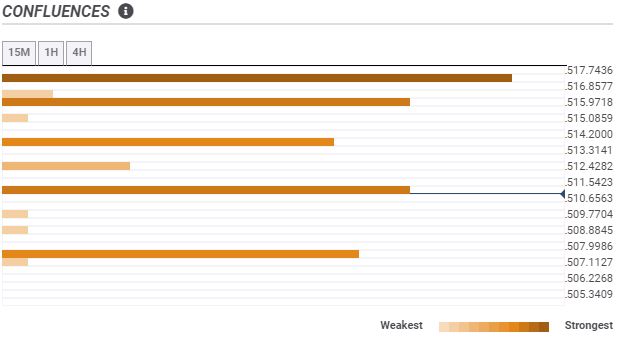 On the other hand, the 50 Simple Moving Average is in line to offer support in case the price explores the areas under $500. If the price rebounds from here, Bitcoin Cash will gain momentum, favoring another run-up to $540 and perhaps $600.