The USD/JPY stayed on the offensive this week without breaking any new ground or moving above its 24-year high of 137.00 from June 29. The Federal Reserve’s aggressive interest rate policies received a boost when strong US June payrolls alleviated recession fears and the USD/JPY jumped nearly a figure in response. American labor market stability has likely insured a 75 basis point hike at the June 27 meeting. 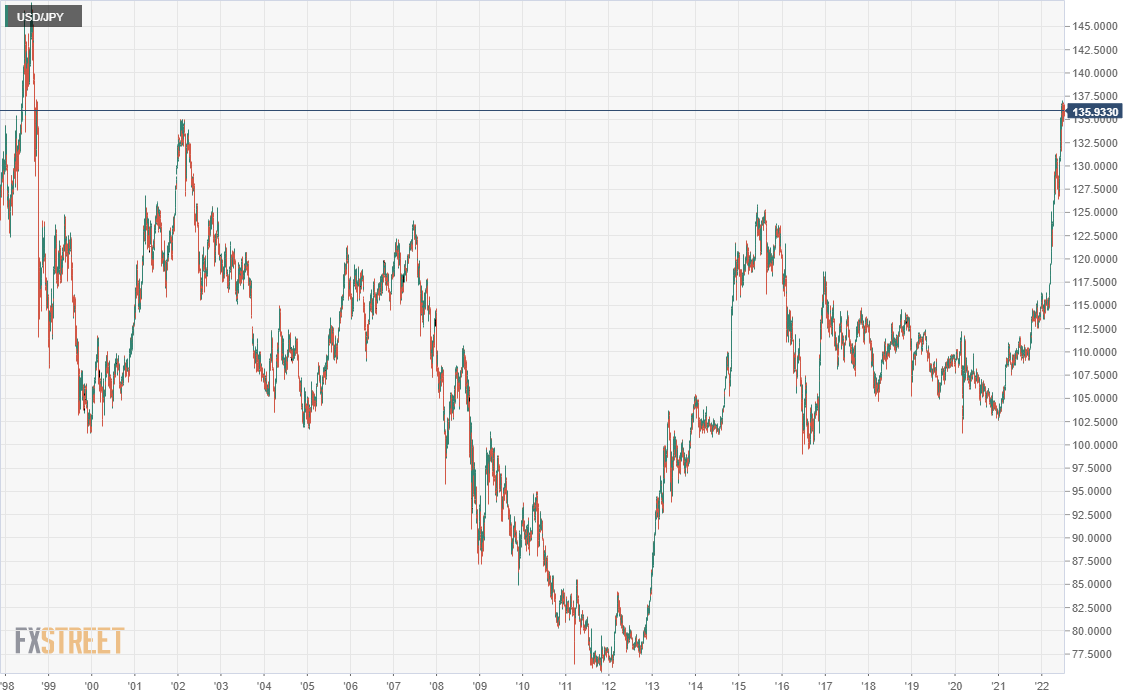 Bank of Japan (BoJ) policy inaction and the unfortunate assassination of former Prime Minister Shinzo Abe, have left the yen and the Japanese economy weaker. Fundamentally, the widening rate differential heavily favors the US dollar. Psychologically, Mr. Abe had been the strongest advocate for Japanese economic growth. Though Mr. Abe had resigned for health reasons in 2020, in his two terms as Japan's longest serving prime minister, he had placed a strong emphasis on reviving the Japanese economy and remained one of its most effective public proponents.

Japanese indicators lost ground in May with the Coincident and the Leading Economic Indexes missing forecasts at 95.5 and 101.4 respectively and falling below April’s levels. The Eco Watchers Survey, which tracks regional economic trends, was slightly better than forecast in its current view but much worse in outlook in June, an ominous development. Japanese household spending from May was also much weaker than expected at -0.5%, a gain of 2.1% had been forecast.

In the US, the Services Purchasing Managers Index from the Institute for Supply Management posted a good reading in the general measure at 55.3, but the crucial New Orders Index fell to 55.6 in June from 57.9, much lower than the 62.1 forecast. The Employment Index dropped into contraction at 47.4, from 50.2, also missing its 49.8 estimate. Jobless claims inched higher with the four-week moving average at 232,500 in the July 1 week from 231,75, the highest level in almost five months.

Nonfarm Payrolls added 372,000 workers in June much better than the 268,000 consensus forecast and nearly on par with May’s revised 384,000. The US unemployment rate was stable at 3.6%. Hourly earnings rose 5.1% annually, and May’s increase was adjusted to 5.3% from 5.2%, evidence that pressure on wages is unabated. The Labor Force Participation Rate, a measure of worker involvement in the job market, fell to 62.2% from 62.3%. Though the drop was small it is a disconcerting sign that with more than 11 million unfilled positions in the economy, worker connection to the labor market remains well below pre-lockdown levels.

The USD/JPY was unable to move above its prior high but the pair remains bid. The combination of the US interest rate advantage and the waxing and waning fears of a global recession and the concomitant dollar safety trade have made the USD/JPY a nearly one way ticket since early March.

Movement above the old high of 137.00 may require a new top in Treasury yields, which despite the gains on Friday remain below their mid-June highs.

Producer prices for June and revision of Industrial Production from May are the Japanese data points in the week ahead, neither will elicit a market response.

In the US the Consumer Price Index (CPI) for June on Wednesday holds center stage followed by producer prices a day later. The expected slight increase in headline CPI to 8.7% would confirm that inflation is still accelerating, a problem that will be unrelieved by a forecast drop in the core rate to 5.7% from 6.0%. The Producer Price Index (PPI) is predicted to be stable at 10.8% for the year. The higher each index comes in the more support it provides for Treasury yields and the dollar. Retail Sales for June on Friday will be scrutinized for the health of the US consumer.  Sales are forecast to recover to 0.8% from May's unexpected -0.3%.  A weak sales number will revive concern over a US recession.

The factors supporting the USD/JPY are unchanged from previous weeks but the repeated failure to penetrate 137.00 make the pair vulnerable to temporary retreats. That said the base at 134.50 to 135.00 is firm and should be expected to hold.

The MACD (Moving Average Convergence Divergence) price line crossed the signal line on June 30. Though the divergence narrowed slightly this week it remains a warning for potential declines. The May 30 to June 29 run is intact with no profit-taking as yet and the longer the USD/JPY is unable to break above the old high at 137.00 the higher the pressure will be for temporary selling.

Opposing the possible slippage is the Relative Strength Index (RSI) which improved a bit from Monday to Friday underlining the basic positive aspect of the USD/JPY. Volatility dropped as the Average True Range (ATR) measured this week’s much diminished ranges, trapped between 135.25 and 136.25

Once again resistance above 137.00 is weak, there are no references from the last time USD/JPY traded in those precincts in 1998. The USD/JPY traditionally gravitates to big and half-figures so 137.50, 138.00 and above are the most likely places to look for pause.

Support is plentiful with a month's worth of trading providing many guideposts. The 21-day moving average (MA) at 135.34 augments the support line at 135.50 and the 23.6% Fibonacci level at 134.35 backs the line at the same level.

The FXStreet Forecast Poll is dominated by the recurring inability of the USD/JPY to forge new ground over 137.00. Without more emphatic support from US interest rates moving above their previous highs earlier this month, the ascent to a near quarter-century peak will be difficult to sustain.