The USD/JPY crashed through support at 106.00 that had held since the early days of the pandemic, following the EUR/USD which broke its range two weeks ago, then took out 105.00 on Wednesday but comments from the Ministry of Finance on Friday and some sensible week end and month end profit taking sent the pair racing higher with the biggest moves coming in the London and New York market.

A Ministry of Finance (MOF) comment in Tokyo that ‘forex stability is important,” standard code for the levels are of concern was later seconded by MOF head Taro Aso who noted that strength in the currency didn’t correspond with trade balance shifts.

That the bottom for the Japanese economy, depending on the statistic, came in April or May, was confirmed this week but so was the improvement into the summer.

The Coincident Index which puts the general state of the economy in one number came in at 73.4 in May, below the 74.6 forecast and down from April’s 80.1.  It was the weakest score since the financial crisis.

Leading economic indicators in May slipped to 78.4, missing their predictions of 79.3 and like the Coincident Index above the lowest reading since the financial crisis and its immediate aftermath.

Statistical evidence for the recovery from the March and April closures accumulated but markets have already moved to the concern, evident in the currencies over the past two weeks, that the US will be unable to sustain the momentum and might slip into further decline, especially in jobs.

Durable goods rose 7.3% in June adding to May’s 15.1% burst though they are still lacking the combined 35% drop in March and April when the economy was shuttered.  Goods ex-transport climbed 3.3% in June and 3.6% in May, as the overall they are still down on the 10.1% loss in the prior two months.

The FOMC meeting on Wednesday produced no new policy or analytical information.  Yield curve control, the targeting of specific long-term rates was not mentioned.  Chairman Powell was realistic about the challenges facing the economy and noted again that the course of the virus defines the success of the recovery.

Second quarter GDP set its expected record at -32.9% annualized, a trifle less than the -34.1% forecast. The US is now officially in recession after -5% in Q1. The Atlanta Fed’s GDPNow model posited 11.9% in the third quarter in its first estimate.

Initial jobless claims rose to 1.434 million for the second straight weekly gain dramatizing the worry that the higher virus case counts in many states will inhibit the recovery. The low for claims was 1.307 in the week of July 10.  Continuing claims jumped to 17.018 million on July 17 from 16.15 million.

Personal spending in June, properly personal consumption expenditures (PCE) rose 5.6%, 5.5% had been forecast. After the May increase of 8.5% the combined gain of 14.1% remains below the shutdown loss of 19.5%.

Core PCE prices, the Fed’s inflation gauge,  climbed 0.9% in June following May’s 1% increase. It is down from 1.8% in February.

The diving dollar of the past two weeks is most directly related to the fear that a revived pandemic will reverse the gains of the US economy since May. This view will be as short-lived as the panic in early March.

As nations reopen their economies the increase in Covid exposure and cases, though not to any great degree hospitalizations and fatalities, is inevitable.   It is not a function of public health policy but a measure of the contagion of the virus.

A number of countries who had previously seen very low case numbers, Japan, Hong Kong in Asia and Spain in Europe have seen their case load rise again. The same has been true in several US states.  In Texas and Florida among the earliest to reopen positive tests have begun to fall along with hospitalizations.  The vast majority of what are referred to as ‘Covid cases’ are simply positive test results for exposure many with few or no symptoms.

As the incidence of the virus evens out the potential economic impact will also.  What has been seen as a particular US problem for several weeks will become a generalized global issue. The differential extracted from the dollar for its nation’s supposed recklessness will reverse as the pandemic playing field tilts the other way.

The relative strength index dip on Thursday was the first trip to oversold since the early pandemic panic on March 9.  Friday's strong reversal suggests that this sell-off was overdone.  The week's action has left the moving averages relatively out of range. The 21-day at 106.65 acts as a second to resistance at 106.50. The 100-day gives strong support to 107.50 and the 200-day at 108.25 would offer resistance of its own should the market arrive.

The bearish view in the one week has already been fulfilled with Friday's low of 104.18. One could say that its forecast has also been completed with the snap-back to the 105.90 on close. The higher outlooks in the one month and the one quarter are unchanged from last week though both forecasts are lower reflecting the week's trading. The perception that the pandemic is seeing an solitary revival in the US will likely diminish as a second wave spreads in other countries and the outbreaks in Texas, Florida and elsewhere recede without any substantial damage.  As the US cases fall the USD/JPY should rise.

GBP/USD remains pressured towards 1.3900, having stalled the V-shaped reversal once again near 1.3940. A rebound in the US dollar alongside the yields seemingly weighs. The pound also feels the heat from Brexit chaos and delayed economic reopening.

Cardano price had successfully held the 2018 high from May 24 until Saturday’s close below $1.40. Today’s weakness has confirmed the breakdown, and ADA may be beginning a larger decline that ...

Is the Fed changing its mind? 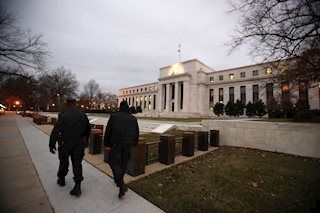 We will not likely get an explanation for how the Fed can be “hawkish” while at the same time the 10-year yield is sinking, the 30-year is under 2% for first time since February, and the 5-year/30-year spread is the smallest since December.