The market's opening gambit this week showed the potential, even the desire, to put the COVID-19 world in the past.

The USD/JPY shot higher on Monday after the November Purchasing Managers' Indexes from IHS Markit handily beat forecasts. Manufacturing PMI came in at 56.7, over the 53 forecast and October's 53.4 reading. Services PMI was 57.7 on a 55.3 estimate and 56.9 the prior month. 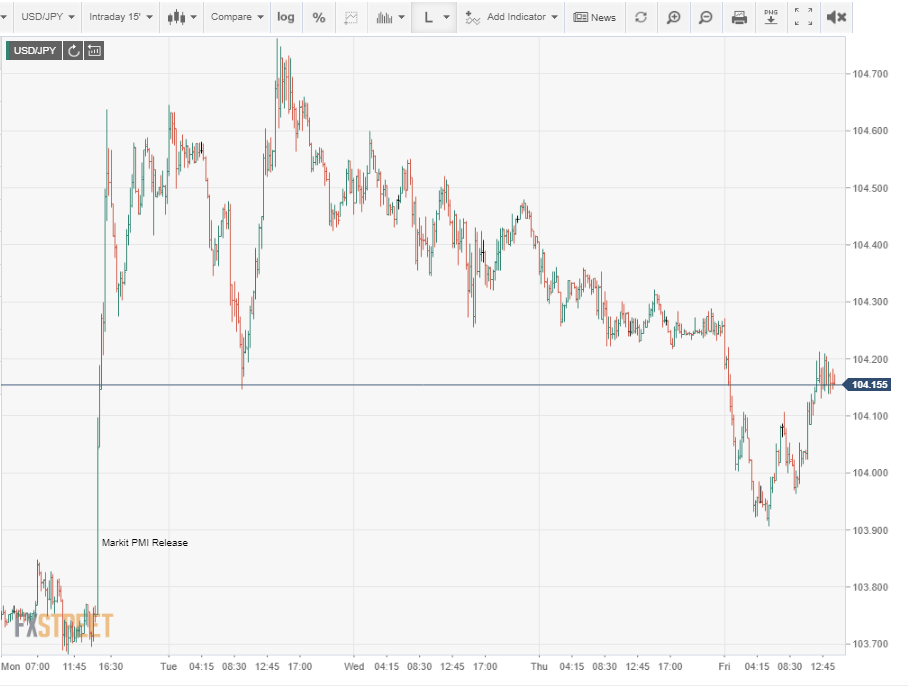 The company's press statement highlighted labor improvement. “Encouragingly, there was a marked uptick in hiring during November to result in the steepest monthly rise in employment recorded since the survey began in 2009.”

The run was reminiscent of the two figure gain,103.37-105.37 on Monday November 9 after the Pfizer announcement of its successful vaccine trial.

In each case subsequent trading reverted to the weaker dollar themes of the past eight months. As long as the pandemic dominates the near horizon it will be difficult to sustain a response based on comparative economics but a return to that traditional scenario is the next development. 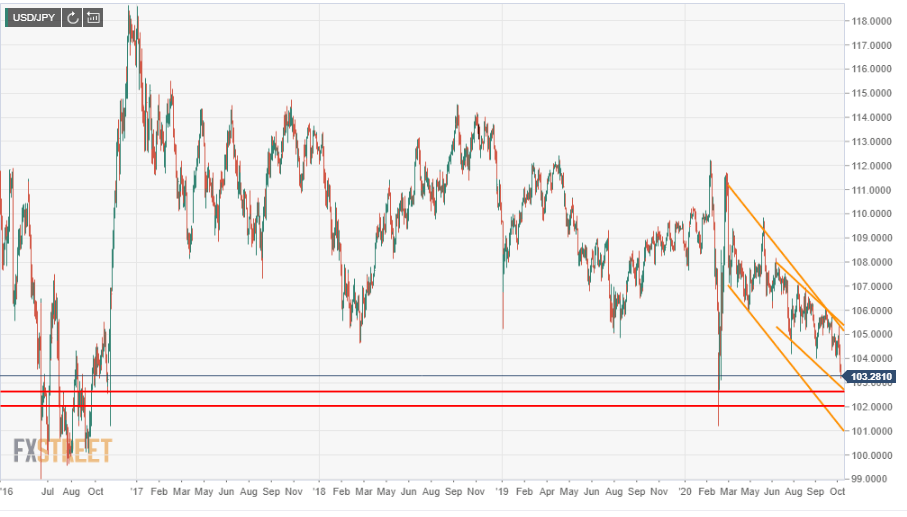 Safety-trade considerations and the yen interest rate advantage kept the USD/JPY moving lower after Monday's dollar burst with the week's open at 103.86 nearly the same as Friday's 104.05 close.

Tokyo consumer prices fell 0.7% on the year in November, a bit more than the 0.6% forecast and twice October's 0.3% decline. These were the first back-to-back deflationary months since early 2017 and they reinforced the yen rate advantage.

The Bank of Japan overnight call rate is -0.1% and the fed funds mid-rate is 0.125% but annual Japanese CPI has averaged just 0.05% over the past six months, in the United States it has been 0.93%. The Japanese near-deflation inprices provides the yen with greater appreciation despite BOJ's negative base rate than the Fed's nominally better interest rate and much higher inflation does for the dollar.

Treasury yields were marginally higher on the week with the 10-year opening at 0.824% on Monday and closing at 0.857%.

Technically, the descending channel for the USD/JPY remains predominant. Support is weak except for the line at 103.00, which has references in early November and from the March pandemic collapse.

The waning psychological impact of the pandemic is evident in the frequent market responses to good US economic data and positive COVID-19 news. However, the barrier to a new scenario in the currency markets is the state of the pandemic in the United States. Until the number of diagnoses starts to decline and the series of new, albeit economically limited, closures abate, it will be difficult for traders to wholly abandon the safety-trade to the yen or countenance the stronger US economy.

As has been true for many weeks, technical analysis points lower. The five-month-old down channel is stable and its borders firm. Support at 103.75 and 103.55 is weak. While lines at 103.30 and especially 103.00 are more substantial their trading referents are few, two days this month for the former and three days in March for the latter. The 21-day, 100-day and 200-day averages trail the USD/JPY decline.

Absent an improvement in pandemic statistics, inertia should carry the USD/JPY lower.

Deflation has been an intermittent problem for the Japanese economy for more than two decades and it may be emerging again in the wake of the pandemic. The Bank of Japan's overnight call rate is already -0.1% and with the yen having gained 10.9% against the dollar in four years, the monetary and fiscal authorities have limited policy options available to counter the decline in price levels.

The Corporate Service Price Index, which measures the prices of services traded among companies, was -0.6% on the year in October, far below the 1.2% forecast. The Leading Economic Index rose to 92.5 in September, the highest since July 2019 but the August reading was revised down to 88.5 from 92.9.

The Tokyo Consumer Price Index (CPI) for November (YoY) fell 0.6% as expected, following the 0.3% drop in October. It was the first back -to-back declines since February, March and April 2017. Tokyo Core CPI (ex Food, Energy, YoY) slipped 0.1% as forecast after the October 0.2% decrease. It was the first consecutive monthly decline since June and July 2017.

A mixed group of figures were displayed this week. Purchasing Managers' Indexes for November were better than predicted as were Durable Goods Orders. Initial Jobless Claims rose for the second time, likely confirming the impact of new pandemic closures in some states. Consumer Confidence dropped and the housing market continued its excellent run. Third-quarter GDP confirmed the active recovery.

Markit's Preliminary Manufacturing PMI for November was considerably better at 56.7 than its 53 forecast and October's 53.4. It was the highest reading since September 2017. Services PMI registered 57.7 on a 55.3 prediction and the 56.9 September score. It was the highest level since March 2015. The Markit Composite PMI rose to 57.9 in November from 56.9.

Conference Board Consumer Confidence dropped to 96.1 in November from 101.4 in October.

Durable Goods orders rose 1.3% in October, ahead of the 0.9% indication and September was revised to 2.1% from 1.9%. Goods Orders ex Transportation also climbed 1.3%, more than tripling the 0.4% forecast. September's orders almost doubled to 1.5% from 0.8% with revision. Durable Goods Orders ex Defense rose 0.2% in October after a 3.8% gain prior.

Gross Domestic Product in the third quarter expanded at a 33.1% annual pace as expected, reversing the 31.4% pandemic decline in the second. Michigan Consumer Sentiment in November was adjusted to 76.9 from 77. Personal Income in October fell 0.7%. It had been predicted to be flat after September's 0.7% increase. Personal Spending gained 0.5% in October, 0.4% had been projected and September was revised to 1.2% from 1.4%. 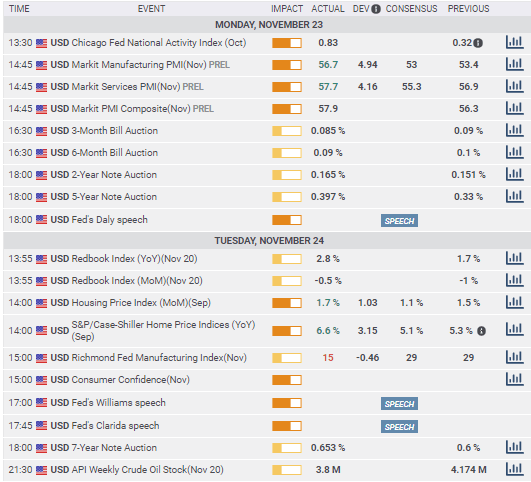 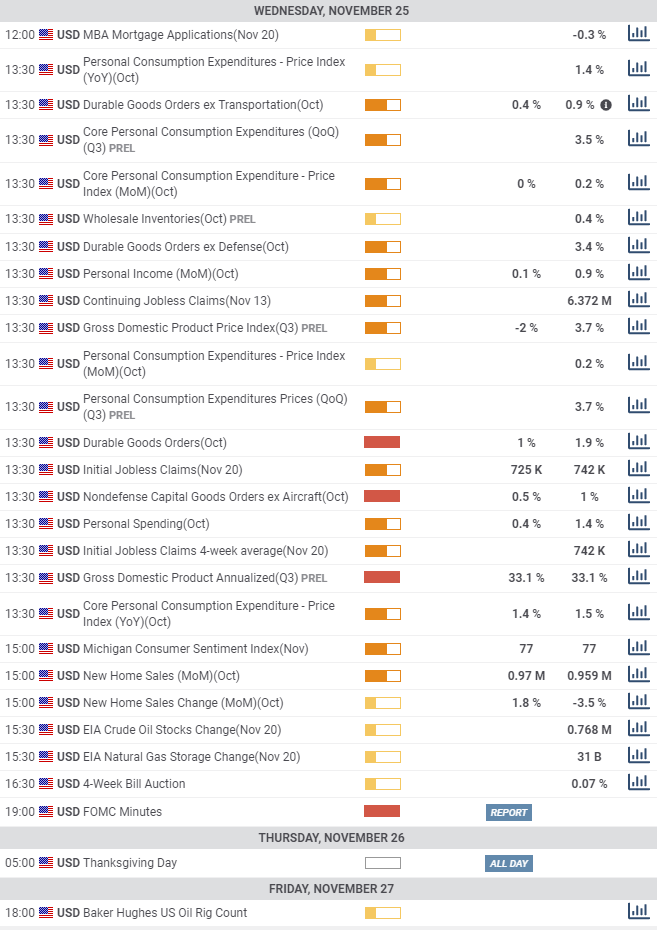 Consumer Confidence for November is the most pertinent information this week. The predicted decline could weigh on the yen. The Jibun Purchasing Managers' Indexes for November are revisions.

Construction Orders for October are out on Monday, they fell 10.6% in September. Housing Starts are forecast to decline 8.6% in October after dropping 9.9% in September. This measure of single-family home construction has decreased for 15 straight months; annualized starts were 815,000 in September. The Jobs to Applicants Ratio for October is projected to rise to 1.09 from 1.03. The national Unemployment Rate for October will be unchanged at 3%.

The Jibun Bank Manufacturing PMI for November is expected to be unchanged at 48.3. It has been below the 50 division between expansion and contraction since March 2019. The Services PMI was 47.4 at first release. The Consumer Confidence Index issued by the Cabinet Office is forecast to drop to 29 in November from 33.6 in October. The pandemic low was 21.6 in April. 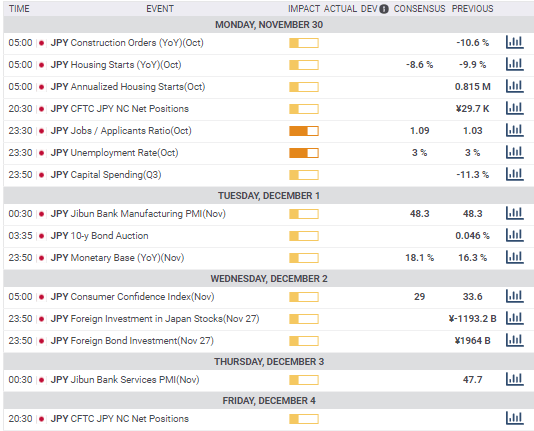 The Employment Situation Report from the Labor Department for November leads the information parade. After the recent reversal in Jobless Claims markets will be looking for reassurance that the employment recovery is on track. Weakness in Nonfarm Payrolls could damage equity markets and the dollar. The better than expected PMI reading for November from Markit will need confirmation from the Institute for Supply Management (ISM) before the business improvement is accepted.

Federal Reserve Chairman Jerome Powell will testify before the US Senate Committee on Banking, Housing, and Urban Affairs as required by the Coronavirus Aid, Relief, and Economic Security Act (CARES).

Construction Spending is forecast to rise 0.8% in October after a 0.3% increase in September.

Private Payrolls from ADP are projected to rise 500,000 in November following 365,000 in September. The Fed's Beige Book of anecdotal economic assessments for the December 4-5 FOMC meeting is out on Wednesday.

Nonfarm Payrolls are forecast to add 520,000 in November after 638,000 in October. The unemployment rate (U-3) is expected to be 6.8% in November after 6.9% in October. Average Hourly Earnings should be unchanged on the month in November at 0.1% and 4.6% from 4.5% on the year. The Underemployment Rate (U-6) was 12.1% in October and the Labor Force Participation Rate was 61.7%. Average Weekly Hours will be unchanged at 34.8. Factory Orders are forecast to rise 1% in October, they increased 1.1% in September. The negative Trade Balance is expected to expand to $-65.2 billion in October from $-63.9 billion. 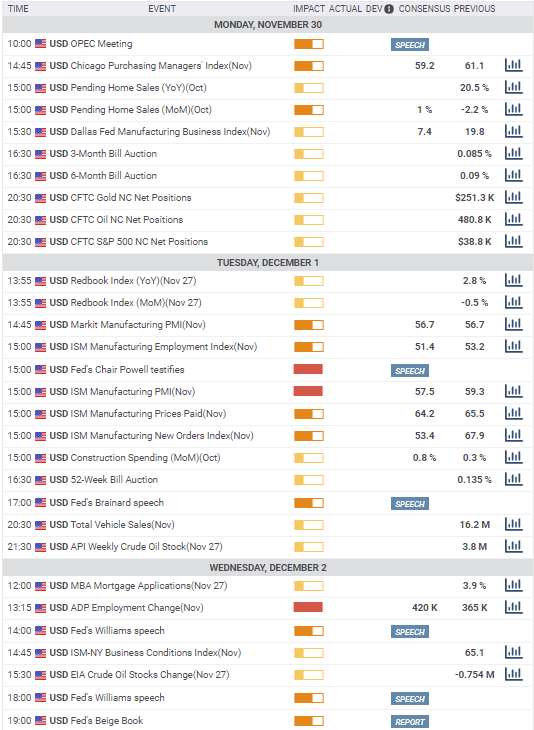 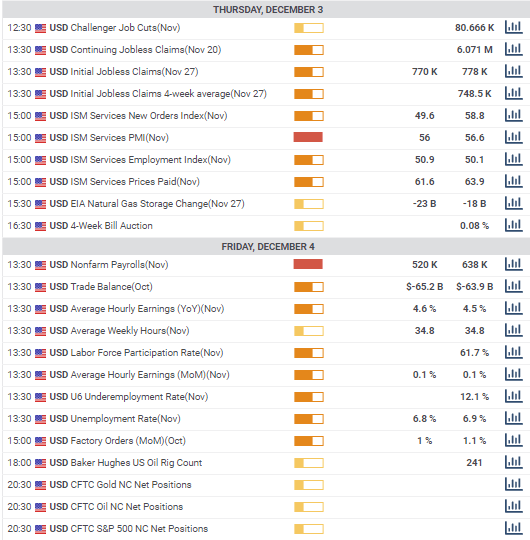 This week's performance in the USD/JPY, like that of November 9-13, a fundamental run higher followed by a technical slough, underlines the contrast between the continuing decline and its twin remedies, the end of the pandemic and a swiftly improving US economy.

Technical indicators remain depressive. The Relative Strength Index drifted lower as the week progessed after nearly reaching neutral with Monday's rally. At 43.30 on Friday it is a weak sell signal. The moving averages are all above market, though the Monday ascent did cross the 21-day line, a potential rising sign, until recrossed on Thursday. At 104.43 it reinforces resistance at 104.55. The 100-day average at 105.50 is just above and adding to the line at 105.40. As is typical in a long decline, the 200-day trails the market at 106.59. 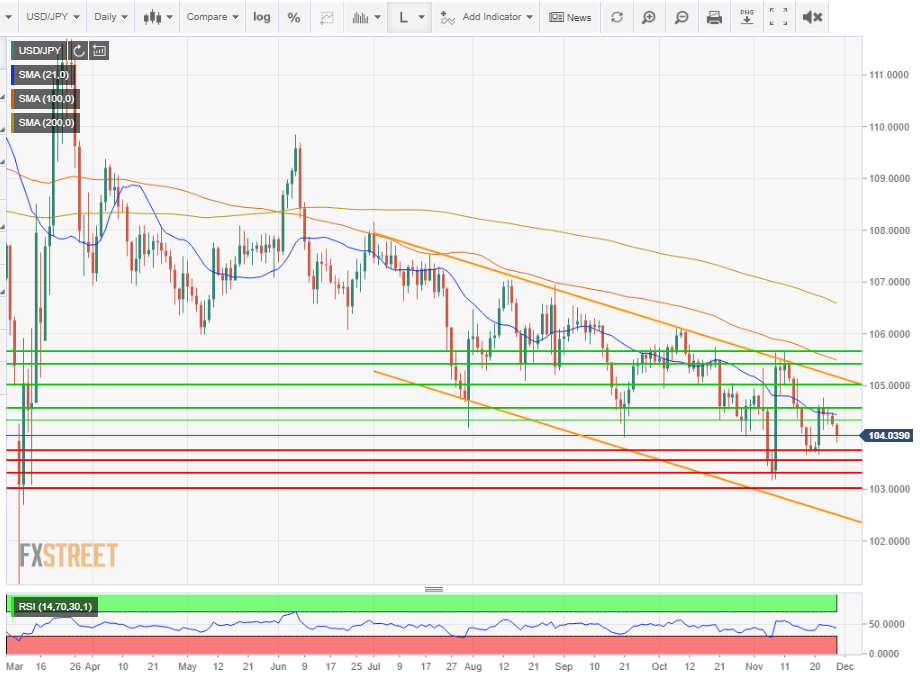 The one-week FXStreet Forecast Poll at 104.08 was realized by the close on Friday. The nearly identical one-month and one-quarter forecasts are evidence that the technical impetus lower is extremly weak.