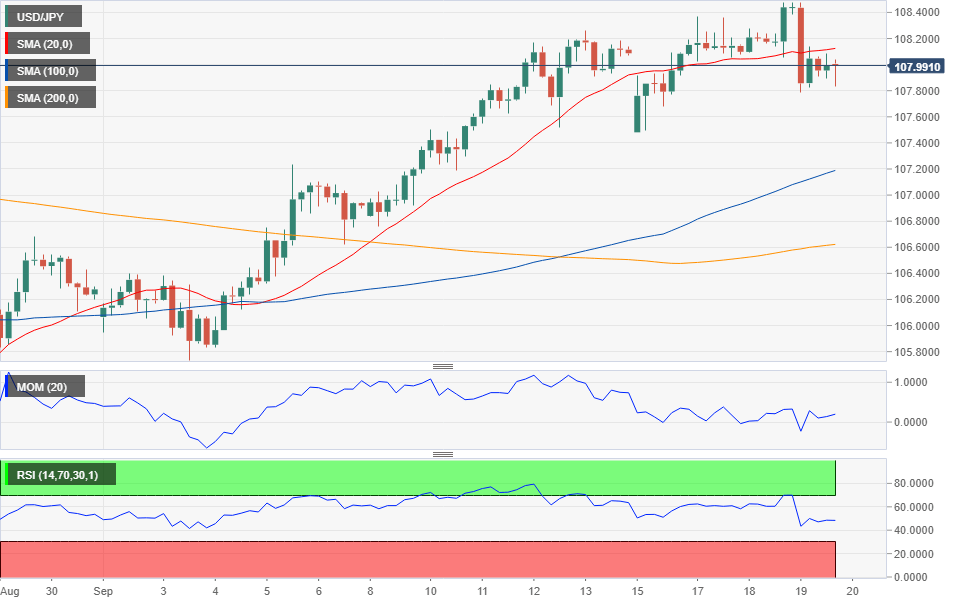 The USD/JPY pair has retreated from a multi-week high of 108,47 achieved post-Fed’s decision, as the Bank of Japan also made a monetary policy announcement. The BOJ kept its monetary policy on hold but announced that it would review its monetary policy next month amid mounting risk to the economic recovery, somehow hinting possible action in October. The Japanese yen appreciated following the news, holding on to gains despite positive US data. Equities retreating from intraday highs helped to keep USD/JPY to remain on negative ground. Japan released the July All Industry Activity Index, which was up by 0.2% when compared to June. During the upcoming Asian session, Japan will release August National Inflation, with the annual CPI ex-Fresh Food seen up by 0.4% against the previous 0.6%.

The USD/JPY pair is consolidating just below the 108.00 level, and the 4 hours chart shows that it has spent most of the day below the 20 SMA, after breaking below the moving average at the beginning of the day. Still holding above the larger ones, technical indicators are within negative levels, although without directional strength. The risk of a bearish extension will increase on a break below 107.45, a relevant Fibonacci support that has contained sellers for over a week.