The Canadian dollar has failed to capitalize on the jump in oil prices since the Russian invasion of Ukraine. Nor has the loonie benefited from the Bank of Canada's early reversion to a hawkish monetary policy. The risk-aversion flood to American assets and currency over the last two weeks has left the USD/CAD open to further advances if the global political and economic situation deteriorates. 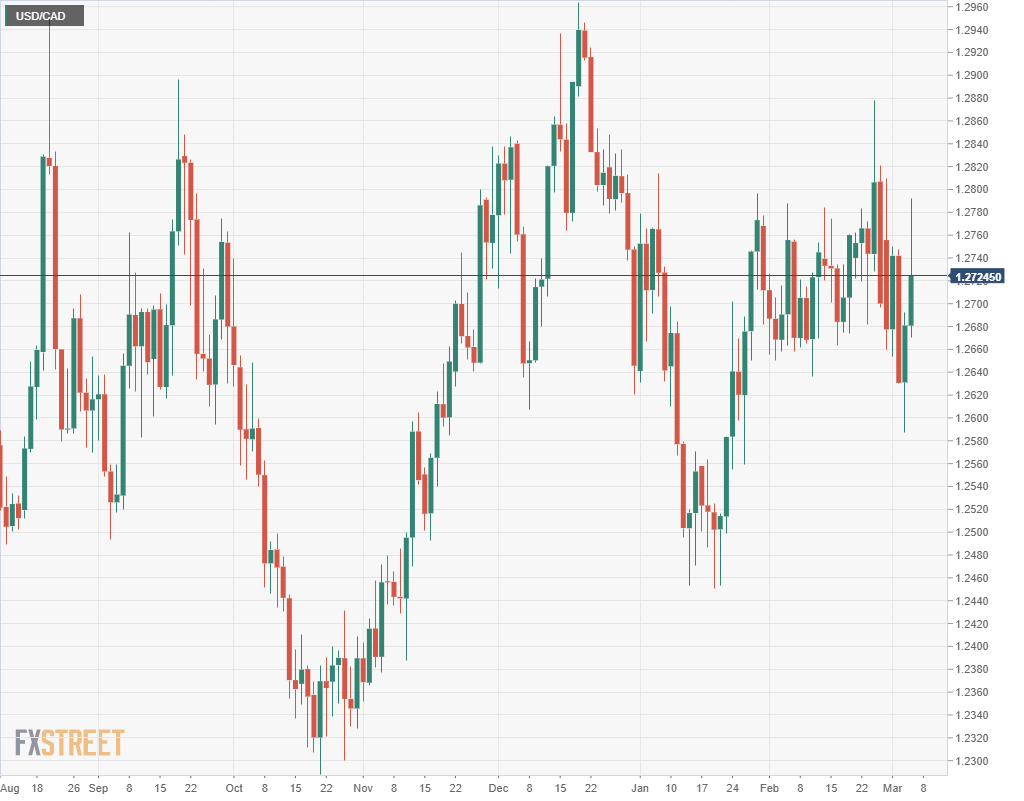 The Bank of Canada (BOC) ended its bond buying program on October 27 when the Federal Reserve was still alluding to transitory inflation, moving to a de facto tightening stance well before its American counterpart. The USD/CAD closed at 1.2354 that day.

While the standard attributes for currency strength, economic status and central bank monetary policy, have or should have tilted to the Canadian dollar, the Fed dominance of the North American economy and fear of a greater military and economic debacle from the Ukraine war have more than countered these traditional virtues. Over the last four months the USD/CAD has gained 3.1%.

Canadian price data was considerably stronger than forecast. The Industrial Product Price Index climbed 3% in January far ahead of the 0.4% estimate. The Raw Material Price Index rose a remarkable 6.5% on a -0.2% prediction and a 2.7% decline in December. These gains are before the surge in energy prices in late February. Consumer prices in Canada and the US are headed substantially higher.

American statistics were less important to traders than Federal Reserve Chair Jerome Powell’s two days of testimony in Congress on Wednesday and Thursday. Mr. Powell reaffirmed the central bank’s commitment to launching its inflation campaign with a 0.25% hike at the March 16 meeting.  Much of the questioning from legislators was about the economic risks from the Ukraine war and the likely impact of soaring oil prices on inflation.

Purchasing Managers’ Indexes for manufacturing and services in the US were better than expected in February with the exception of employment. The service employment index dropped to 48.5, its first trip below the 50 expansion/contraction mark since last July.

Nonfarm Payrolls in February rose 678,000, considerably more than the 400,000 consensus forecast. Initial Jobless Claims were 215,000 in the final week of February and a two-month low.

The Ukraine war continues to dominate markets and the USD/CAD. Fed policy, the US labor market, and even soaring oil prices are secondary to the perceived dangers of the conflict.

The USD/CAD most recent low in mid-January of this year around 1.2500 came when WTI was trading at $85. Since then WTI has soared 33% and the USD/CAD has gained 2%. That reality is the most pertinent aspect of the potential price movement in the next few weeks.

The Ukraine war seems to be evolving to a more protracted and difficult conflict than markets anticipated. Oil’s 17.6% increase this week reflects the tremendous uncertainty for any resolution.

Markets will not reduce risk premiums until there is movement toward a cease fire but such an agreement would also reverse some of the gain in oil prices, leaving the USD/CAD in limbo. Russian energy exports have not been sanctioned so a resolution of the war would not increase supply.

Russian President Vladmir Putin does not appear to be hedging his bet on the war as yet, and if accurate, that means further combat, casualties and destruction. Current indications are that the safety-trade to the US dollar could be enhanced as the war grows more bitter.

Canada’s employment figures for February and January exports and imports are the main data points in the coming week. Markets will note but not trade.

In the US, consumer prices in February are the main news. Immediate Federal Reserve policy is set, but with the headline and core rates expected to accelerate, the effect will be felt in the economic and fed funds projection due at the March 16 meeting.

The outlook for the USD/CAD is higher, primarily on the safety-trade to the US dollar. .

The restricted range of the last six weeks has left the MACD (Moving Average Convergence Divergence) and the Relative Strength Index (RSI) without direction. The downward cross of the MACD line over the signal on March 1 has not widened to a definite sales prediction. The RSI moved above and below neutral by small amounts this week but settled nearly level. Average True Range (ATR) is at its highest point in five months with the market volatility since the Ukraine invasion on March 24. That degree of price movement will likely continue as the conflict show no sign of ending.

The FXStreet Forecast Poll  has limited bearish potential out to one quarter stemming from the tight ranges of the last six weeks.