With US bond markets shut for Veterans Day there has been a degree of consolidation taking over markets. Some of the trending moves of the past week have just had the pause button pressed. However, there is still very much a focus on developments in the US/China dispute, with a view towards a potential signing of phase one in December. The market reaction now is on whether President Trump agrees to reduce the existing tariffs and by how much. Sterling is still a key mover on the outlook for UK politics with the potential for a stable Conservative Government boosted yesterday by a decision by the Brexit Party to not oppose sitting Conservative MPs in their seats. There will be further fluctuations along the way and opinion polls will be a key gauge of sterling progress in the coming weeks. We would expect that as the cold light of voting day approaches, the polls will tighten and the uncertainty will drag on sterling again. Adding a degree of caution in Asia has been a significant escalation of civil unrest and tensions in Hong Kong for a situation that continues to spiral out of control. With Treasury yields opening higher again today, the recently stronger US dollar looks set for renewing its trend today. If the breakdown on gold is anything to go by then this suggests the stronger dollar remains a key factor for markets.

Wall Street closed a fluctuating session mixed into the close with the S&P 500 -0.2% at 3087. However, with US futures unwinding by +0.1% today there is a more positive look to Asian markets today with Nikkei +0.8% and Shanghai Composite +0.2%. In European markets there is a solid open too, with FTSE futures +0.3% and DAX futures +0.2%. In forex there is a broad move back into USD this morning with outperformance across majors with the exception of a slight gain for AUD as business confidence picked up. In commodities, renewed dollar strength does not bode well for gold in this environment with further decline of -0.3% this morning, whilst oil has picked up by +0.3%.

Chart of the Day – AUD/JPY

There has been a deterioration in the outlook on Aussie/Yen in the past couple of sessions which is questioning the recovery prospects. As the market broke out above 74.50 in the past couple of weeks it looked as though this was a key move, however, the momentum of the move has faltered in recent sessions. With the market turning back from last week’s three month high of 75.67, two consecutive negative candles have broken a three week uptrend and dragged the market back to the breakout support at 74.50. This is a key moment for the bulls. So far, there is still a run of higher lows intact with a support band 74.30/74.50 still there. However, momentum indicators are struggling now as the RSI has confirmed the broken uptrend at a four week low, whilst Stochastics are deteriorating and MACD lines threaten a bear cross. At this stage the corrective forces are mainly momentum driven but a close under 74.50 would add to concerns of a bull failure, which would be confirmed under 74.30. Today’s reaction higher is encouraging for the bulls, but the hourly chart shows the need to close back above 74.95 to improve the outlook again. 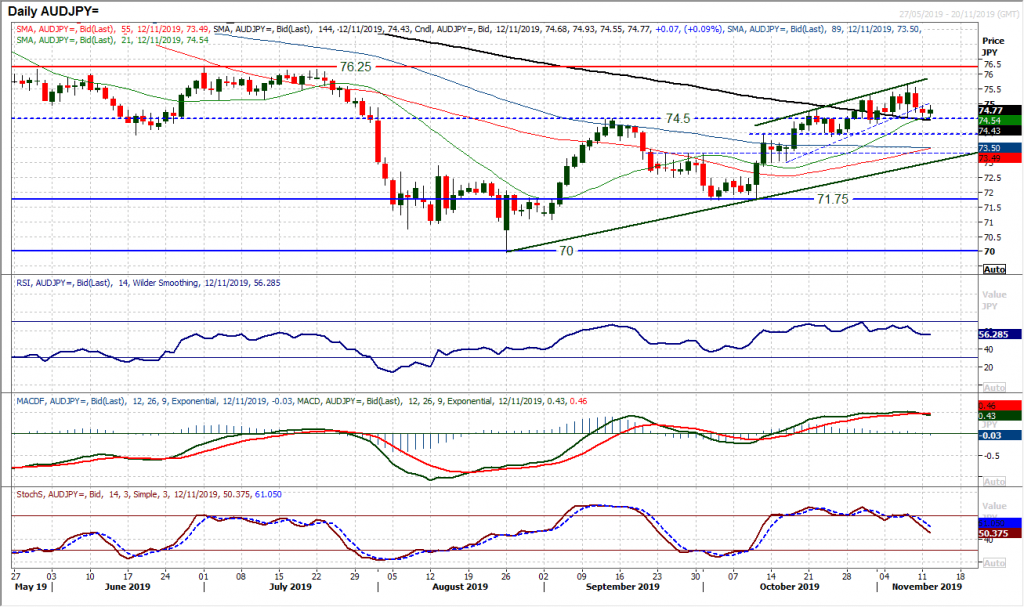 There is a sense that WTI of mid-trend consolidation at the moment. The channel that has been developing higher over the past four weeks has just hit the buffers around $57.85 in recent sessions, however there is still a positive bias that continues. The run of higher lows in recent weeks suggests that suggests a market continues to buy into weakness. There is channel support rising at $54.90 with last week’s low at $55.75 also as a gauge of near term support which will be seen as an area for the bulls to now eye for the next opportunity. We are buyers into weakness within this channel for a move above resistance at $57.85 and a push for the channel highs (currently around $58.90) in due course. Key support of the recent higher low at $53.70. 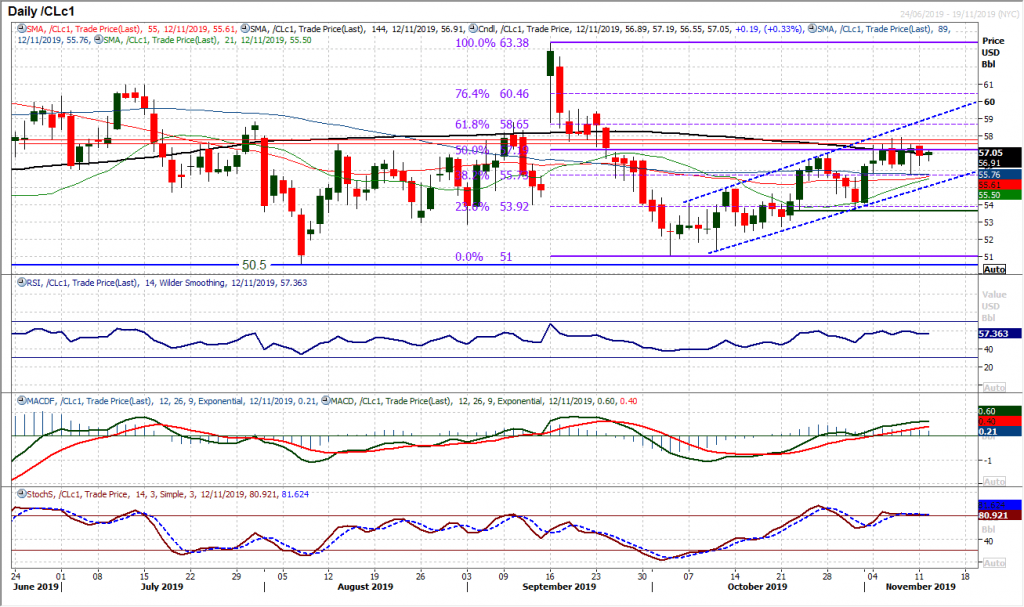 The Dow remains a buy into weakness as a run of higher lows and higher highs now consolidates around all-time highs. There was a positive reaction to initial corrective pressure in yesterday’s session which pulled a decent run into another all-time closing high for the market. It also leaves support at 27,517 above the key breakout band 27,307/27,399. The trend higher of the past five weeks comes in as a confluence with this band at 27,394. Momentum indicators remain positively configured too, although perhaps there is an argument to suggest that chasing the RSI at 69 and a plateauing Stochastics may not be the best timing. We are therefore buyers into weakness, with the 27,307/27,399 area as a decent support band for opportunities now. 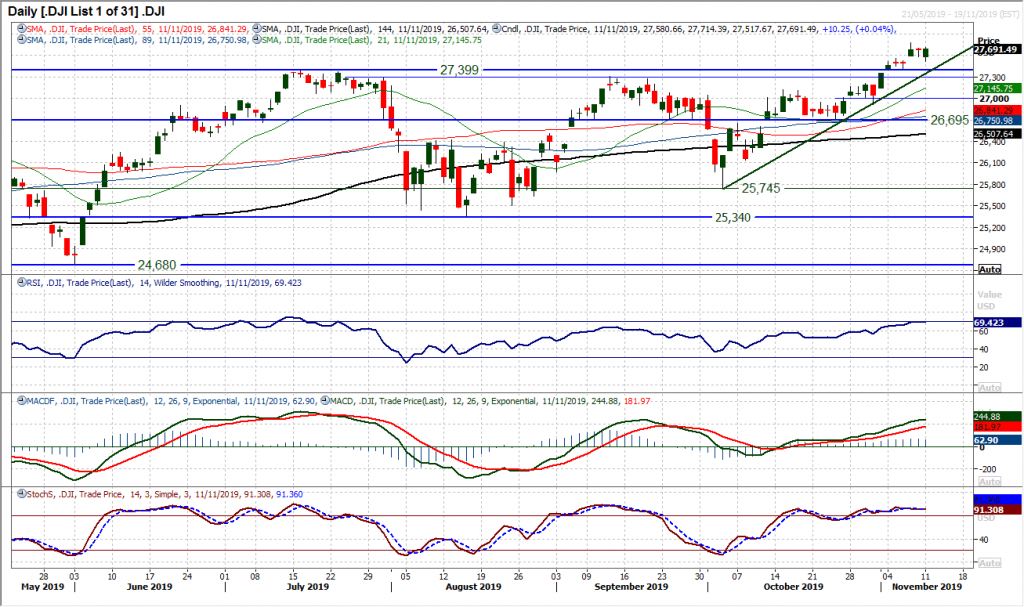 GBP/USD extends losses towards 1.2500, as the UK GDP disappointment weighs negatively on the 2-year Gilt yields. Broad US dollar strength amid risk-off mood also adds to the bearish pressure on the cable.

EUR/USD under pressure below 1.1350 amid risk-aversion

EUR/USD remains pressured below 1.1350, as US dollar trades firmer amid broad risk-aversion. The German ZEW Survey to show signs of an economic turnaround. Heightened expectations for an EU fiscal stimulus plan could buoy the shared currency.