Falling prices are good news for consumers – especially as wage growth is dropping – but may send sterling lower.

Headline Consumer Price Index (CPI) has missed expectations in the past two months by standing at 1.7% annual. Economists seem to have adapted their expectations and forecast a further deceleration to 1.6% in October's inflation report.

Low expectations may lead to an upside surprise – but these downbeat projections are justified. The pound's exchange rate jumped in October as Prime Minister Boris Johnson struck a new Brexit deal with the EU. A higher sterling value lowers the prices of imported goods. Moreover, flash estimates for euro-zone CPI have also shown a drop – and the UK is still tied closely to the bloc.

Expectations may even be too optimistic once again – a slowdown to 1.4% or 1.5% cannot be ruled out. Even an "as expected" outcome would send CPI to the lowest levels since early 2017. Back then, annual inflation was picking up after the vote to leave the EU sent the pound plummeting.

Britain's inflation figures are released after two other significant publications. The labor market report showed the jobless rate to 3.8% – but a drop of 52,000 in total employed. And as mentioned earlier, wage growth has slowed down from 3.8% to 3.6% yearly.

The second release this week has also fallen short of expectations. UK Gross Domestic Product has risen by 0.3% in the third quarter, but yearly expansion decelerated to 1%. These downbeat figures have weighed on the pound, and political developments have also turned adverse for sterling.

Nigel Farage, leader of the Brexit Party, initially sent GBP/USD higher by withdrawing candidates from competing against incumbent Conservative MPs. However, the right-wing outfit will refrain from abandoning marginal seats that Tories need to win for a majority – pushing cable lower.

Technically, GBP/USD has been rejected at the confluence of the 50 and 100 Simple Moving Averages on the four-hour chart and suffers from downside momentum. 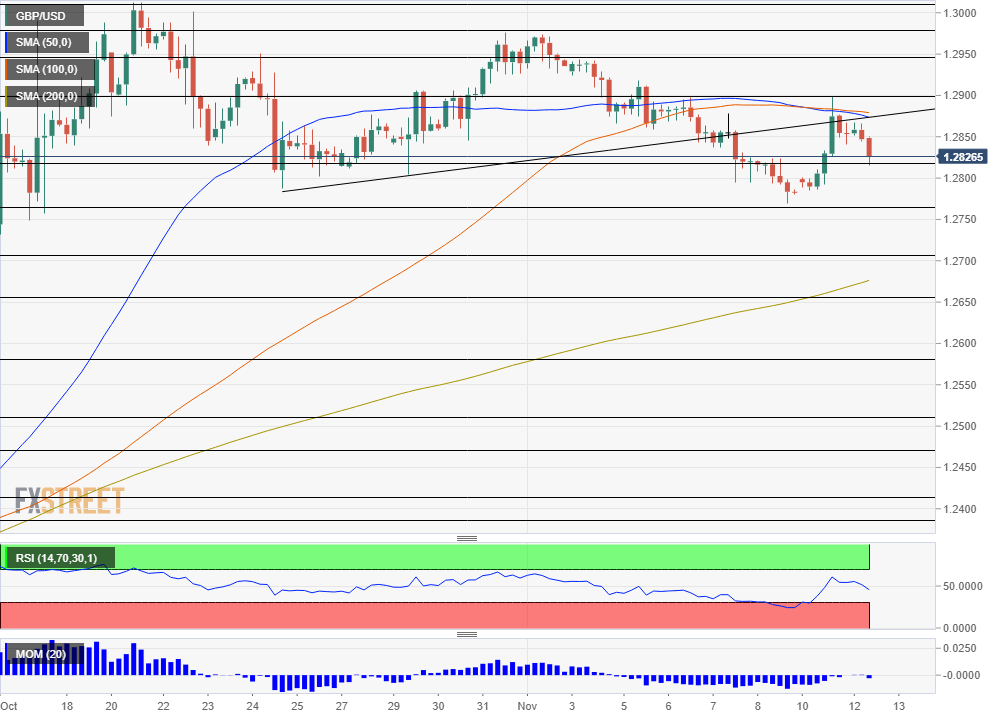 Overall, the bias is bearish.

1) As expected: If inflation slows down to 1.6% as the economic calendar shows, sterling has room to retreat. The bearish bias stemming from weak figures early this week, the perceived lower chances of a Conservative majority, and the frail inflation figure in absolute terms may all weigh. This is the base-case scenario.

2) Worse than expected: A downbeat headline CPI figure of 1.5% or lower may already send the pound significantly lower. Such a scenario cannot be ruled out.  Moreover, the BOE targets a CPI level of 2%, with a range of 1-3%. A fall toward the bottom of the range raises the chances of a cut – exacerbating the fall.

3) Better than estimated: A repeat of 1.7% may help GBP/USD stabilize, and a pickup in inflation could already send it higher. While that would be detrimental for consumers, it would lower the chances of a rate cut. This scenario is highly unlikely.

UK inflation is set to decelerate in October, and these projections look fully justified. The downbeat figures and worsening political prospects create a bearish bias that may exacerbate the pound's falls. A considerable beat may be needed to boost sterling.

The EUR/USD pair is down to daily lows mid-US afternoon, as the dented market’s mood lifts the dollar. Upbeat US data and an on-hold ECB failed to impress investors.

Gold prices are trading a touch below the psychological $1,800 level in markets that have consolidated in a sea of fundamentals as traders await the next cue.