It's not the Roaring Twenties, it's not even 2020, but pent-up consumer demand and the return of shuttered industries could boost the S&P 500 next year well beyond its recent record.

Equity averages were already at all-time highs in late February when COVID-19 panicked markets into the starkest sell-off in post-war history. In one month, from February 19 to March 23, the S&P 500 shed 52.6% of its value.  The return has been equally dramatic, just five months from the nadir to full recovery on August 18. 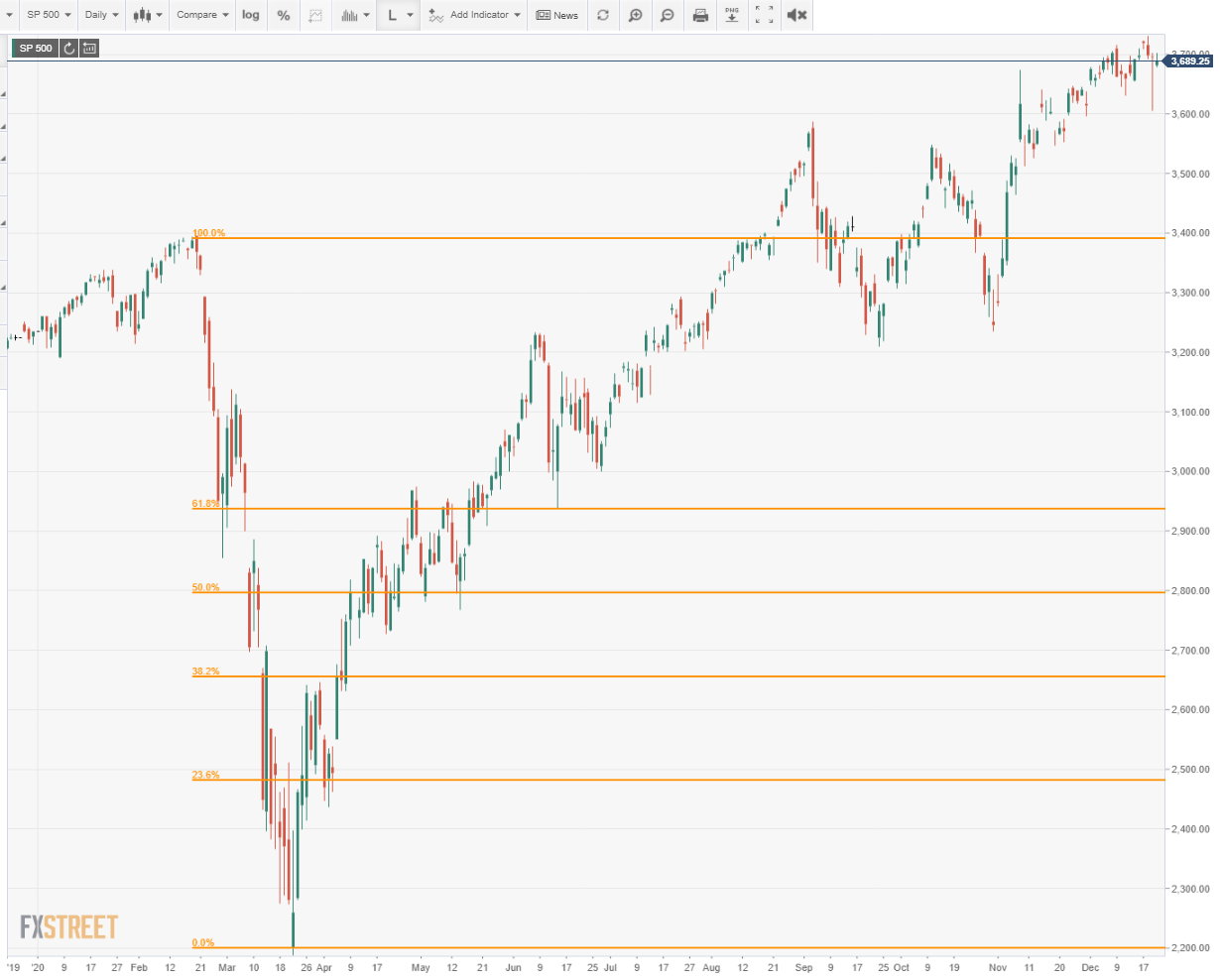 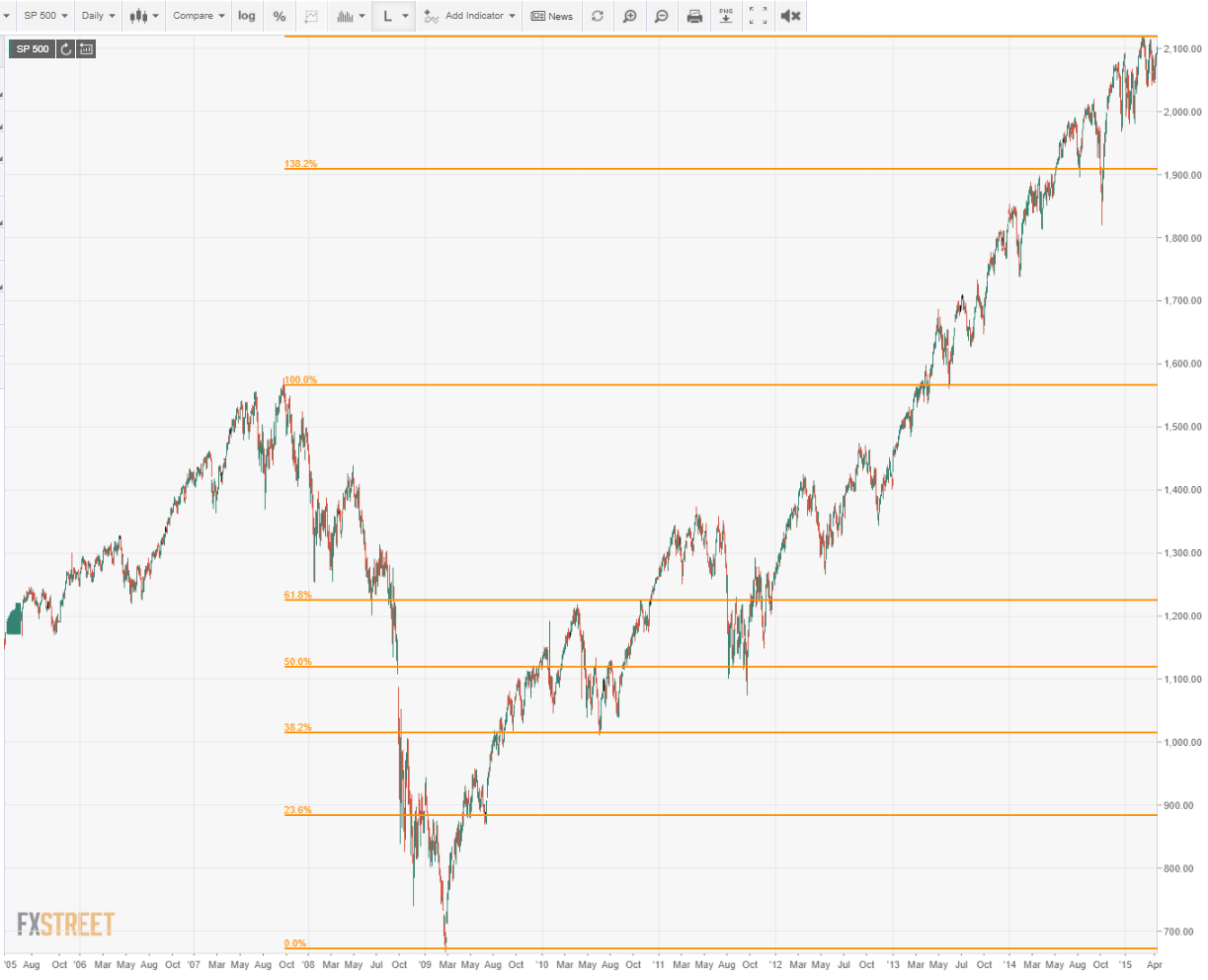 After the 1929 crash and subsequent decline, a generation passed before the Dow was restored. It was not until 1954 that the average again reached the level of the last year of the Roaring Twenties.

The collapse in US economic activity in March and April, as almost every state government ordered the most drastic business closures and personal restrictions in history, is an oft-told tale.

Payroll losses in two months of 22.16 million dwarfed any previous recession. More unemployment claims were filed in eight weeks than in an entire year around the 2008 financial crash and the 14.7% unemployment rate in April was almost half again as high as the 2009 peak.

Recovery from the pandemic shutdowns has been swifter and more robust than most analysts anticipated. Gross Domestic Product (GDP) soared to a 33.4% annualized rate in the third quarter after plunging 31.4% in the second, both all-time records, with the Atlanta Fed fourth-quarter estimate at 11.1%.

Is the almost 10% gain in the S&P average since the summer just euphoria that the existential threat to the global economy has subsided or is it based on economic logic? Are there indicators that the optimism of equity traders is justified?

A number of fundamental factors are tilted to a stronger US economy beginning in the second quarter and lasting to the end of the year.

First and the sine qua non of 2021 is the success of the COVID-19 vaccines in quelling the pandemic. If prevention and successful treatment can end the defensive lockdowns then normal economic life will swiftly resume. There is every expectation from a medical and public health perspective that this will be true. To some degree, markets have moved in anticipation of this positive result, but it is too soon to see results.  When case and hospitalization rates begin to decline markets will add to their positions based on expected growth and the benefits to specific sectors.

The amount of pent-up demand is probably much greater than anticipated. Economists underestimated the May recovery in Retail Sales expecting 8% overall and 4.7% for the Control Group. Consumers delivered more than double those forecasts at 17.1% and 11% respectively.  In June the superior performance was not as wide, 7.5% on a 5% estimate in overall sales and 5.6% on a 3.6% prediction for Control but it was still very strong.

A similarly exaggerated pessimism happened with the reversal of Nonfarm Payrolls in May. Economists in the Reuters Survey predicted continuing losses of eight million jobs, in reality, employers rehired 2.5 million workers.

There is also a psychological aspect to the end of the pandemic and the release of tensions. It is very understandable that, free of worry and restrictions, people will celebrate with a purchase binge. It would be very much in the American consumer tradition.

Our purpose is not to point out forecasting errors. It is very hard to model consumer responses in such an exceptional situation. It is important to note that whatever relief boom is anticipated, the reality will likely be much stronger.

Specific industries, namely restaurants, travel and hospitality have been devastated by the lockdowns. Once the restrictions and closures are lifted activity will surge giving the economy a concentrated and timely boost. The travel, dining and hotel equity sectors have been beaten down in the pandemic and have not, as yet, recovered. They should start to attract buyers soon and substantial price appreciation will follow.

Congress has finally agreed on a second stimulus package after three months of wrangling about the election. While the $600 grant to most families is half of the benefit of the CARES Act back in March, when coupled with the likely end of the pandemic, and much higher employment, it should go directly to consumption.

The Federal Reserve has promised to keep its $120 billion in monthly bond purchases in place until the economy and the labor market are fully recovered. Unemployment in February was 3.5%, in November it was 6.7%.

The 10-year Treasury yield closed at 0.91% on Tuesday, December 22, less than half its average for the three prior years. The Fed's last economic and rate forecasts for 2020 envision the fed funds unchanged through the end of 2023. Market rate repression and its stimulative economic effects could last just as long. 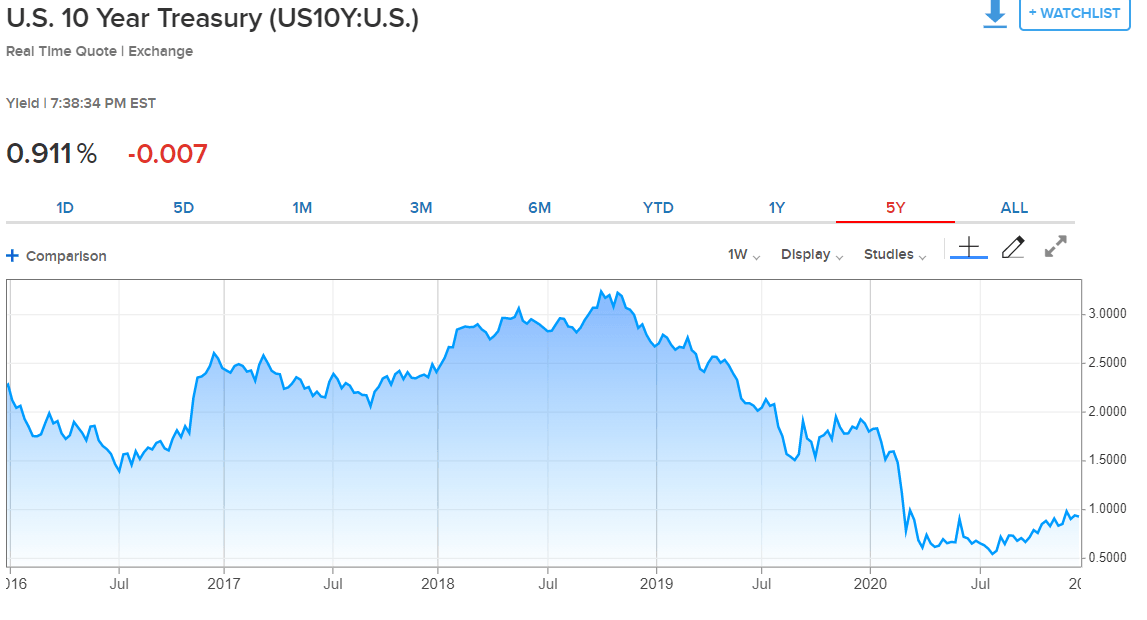 Chances seem good that the Republicans will retain control of the Senate under a Biden administration. Although the Democrats have won the White House, they lost at least 11 seats in the House and have much weaker control particularly with the Republican advantage heading into the 2022 election.

Markets have historically fared well with divided government. In the intensely partisan atmosphere in Washington, it is probably the best economic result.

Despite the increasing number of current lockdowns in Europe and the United States, commodity markets, which normally rise in anticipation of an expansion, are positioned for a global recovery in the second and third quarters.

The Bloomberg Commodity Index (BCOM) closed at 76.55 on Tuesday, December 22, just down from Friday's finish at 77.32, which was its highest level since the March collapse. It has gained 6.2% since the announcement of the Pfizer vaccine a week after the US presidential election. 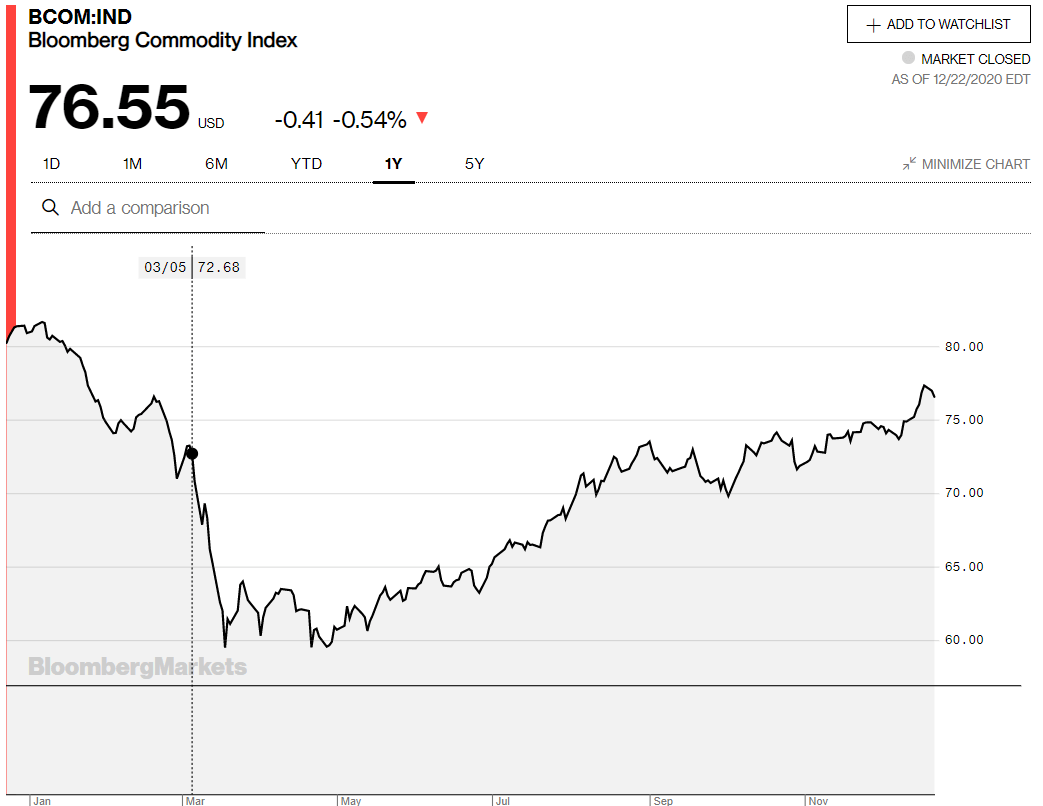 West Texas Intermediate (WTI) has lost some luster after closing at $49.18 on December 18, its best finish since February 25. Nonetheless, at the Tuesday conclusion of $46.88 the world's basic industrial and energy commodity is up 24.3% since the COVID-19 vaccine announcement on November 9.

Even at their nine-month highs, the BCOM index and WTI are still substantially below their averages in the three years leading to 2020. The current level of commodity prices is a precursor to a full-fledged global recovery and not the final reflections. 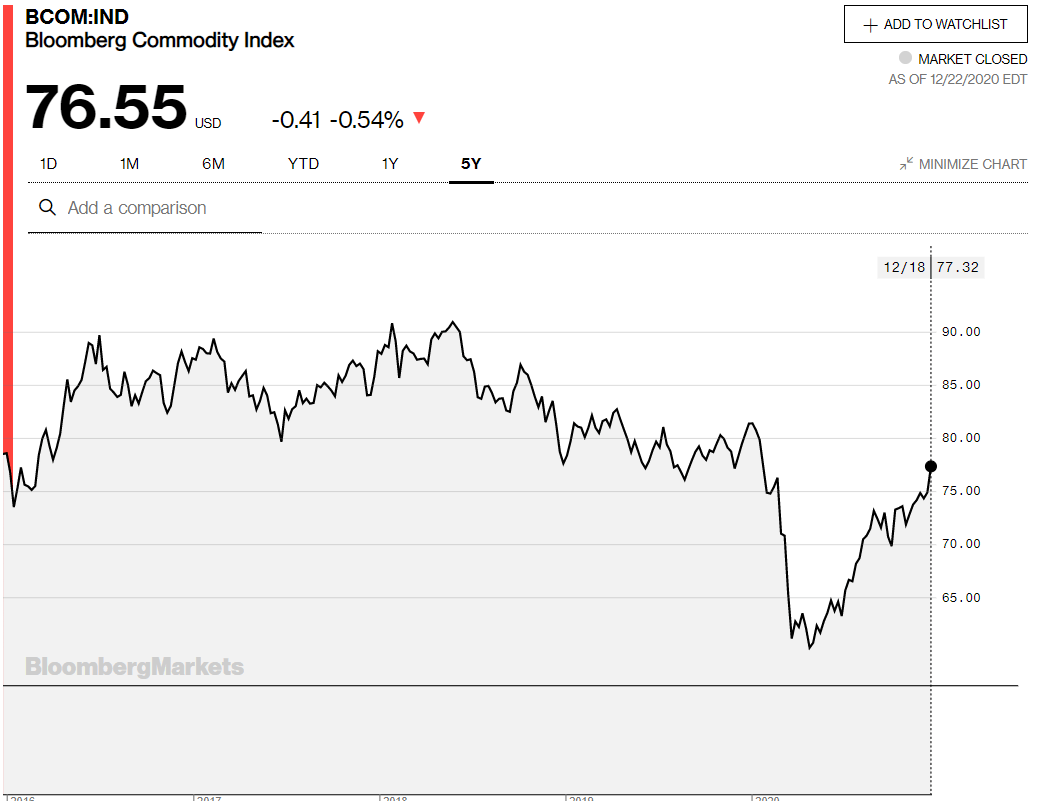 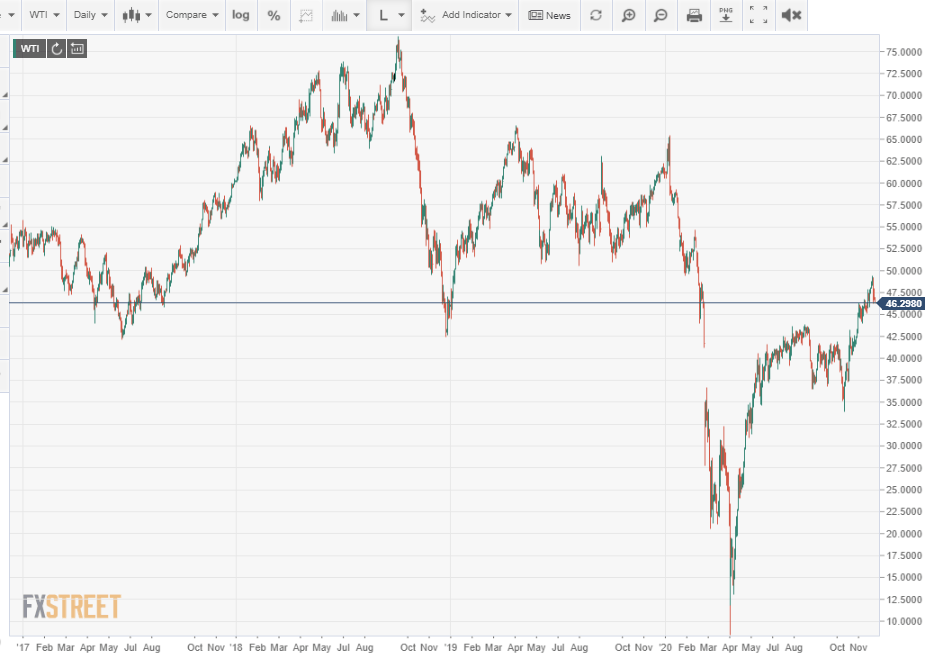 The rise in the S&P 500 since the March low, and stock prices in general, have often been ascribed to the Federal Reserve's bond-buying and extremely low interest rates, the so-called Fed equity put.

Central bank rate repression forces investors to seek out equity markets because returns in the much safer credit world are artificially low.

There is no doubt that credit intervention has inflated stock prices, though the degree is impossible to determine. The 10-year Treasury yield at 0.91% (12/22) is less than half its five-year average and the Fed has vowed to keep buying $120 billion a month until the economy is fully recovered.

Here the lesson from the financial crisis is worth remembering. There is no objective level for equity prices. Even if the market has been driven higher by yield chasing liquidity flows, equity prices will not fall when they are withdrawn unless the economic situation warrants it. If the economy improves from here, stock prices will follow the expansion higher.

To put it differently, the main reason stock prices are higher now is not because the Fed is repressing interest rates but because traders have been anticipating an economic recovery ever since it was clear that the pandemic was not an existential event.

As we have posed the question in the past, where would equities be if COVID-19 were not on its way to extinction?

The next year appears very positive for equities and the S&P 500. Once the pandemic retreats, deferred global consumer demand should drive a robust expansion in growth.

In the near term, fiscal support in the United States, Europe and China will help keep growth intact, bolstered by the global zero rate regime, until returning employment raises consumer spending.

The trade war between the United States and China hampered the economies in both nations and the world for the two years before the pandemic is settled. The deal negotiated by the Trump administration will stand as will the world's dramatically altered view of the costs of investing in China. Neither side is likely to publicly renege on the arrangement, though enforcement may be a good deal laxer under a Democratic White House. At any rate, Joe Biden's long-standing relationship with Beijing ensures a far more cordial Pacific trade theater.

As employment returns and consumption picks up, business spending should add its 10% to 15% to economic activity.

After the sometimes grim and often dispiriting events of the past year, optimism may seem inappropriate but that does not mean it is inaccurate.

SP500 is back to all-time highs, which we see it trading bullish in wave V) of a higher degree wave »III« or maybe even wave B) as part of a bigger running or flat correction in wave »IV«, just in case if we see a massive decline and sell-off at the beginning of 2021. 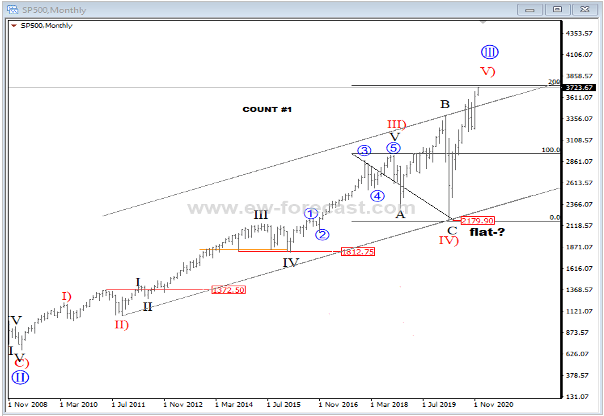 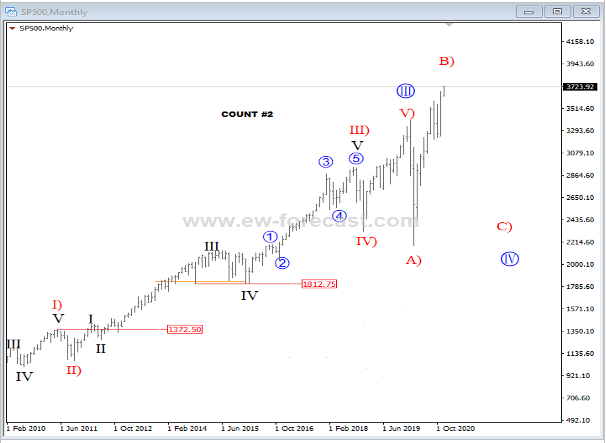 The S&P may be in process of putting in the highs for the year in Q1 2021, and as monetary policy expectations tighten 2nd 1/2 2021 and long term Covid-19 growth concern mount, the theme for 2021 would be consolidaiton in a strong uptrend.