The US monthly report for January will be out this Friday. The country is expected to have added 50K new positions in the month, after losing 140K in December. The cold weather brought a sharp increase in coronavirus cases, which in turn led to some restrictive measures in certain areas of the country. The situation receded as the government sped up vaccination, but the daily number of contagions remains high, and immunization slow. On Wednesday, the country reported 113K cases and roughly 4,000 deaths, a sign that they are far from over with the current situation.

The Unemployment Rate is expected to have remained steady at 6.7%. The Labor Force Participation Rate stood at 61.5% in December, while the underemployment rate was at 11.7%.

Slow progress out of the pandemic

The US has lost roughly 22 million jobs between March and April 2020, when the pandemic arrived in America. So far the country has recovered roughly 12 million, although the pace of jobs’ creation has been decreasing sharply as time went by, and as mentioned, the country actually lost positions. The services sector was the most hit by the pandemic and is still the weakest link in the chain.

At this pace is hard to predict when the employment sector will fully recover from the initial hit, but conservative estimates talk about four years. The global immunization campaign is moving quite slow, although, in the US, 35 million doses have been given.  Should the world approach head immunity, the time-frame could be reduced.

Data released ahead of the release was mostly encouraging, although there are a few downers. As said, the pandemic situation is the major drag which led to jobs’ losses in December. Additionally, Consumer Confidence remains subdued, with the CB indicator holding near its post-pandemic low and the University of Michigan estimate stuck around 80.

On a positive note, the ISM PMIs showed that sub-employment component improved in January. Still, worth remembering that these indexes are more about business sentiment than actual progress in the economy.

Initial Jobless Claims continue to retreat on a weekly basis but remain above the 800K threshold. As for the ADP survey, the private sector reported that it added 174K new jobs in January, quite a recovery from the previous -78K. Finally, planned job cuts announced by U.S.-based companies rose 3.3%, to 79,552, in January from 77,030 in December, according to the Challenger Job Cuts report.

The greenback is strengthening ahead of the release, backed by hopes of another stimulus package in the US.  An upbeat report could further boost the dollar, regardless of equities’ behaviour, particularly against its European rivals. Among those, the EUR is the weakest, as the Sterling became more interesting after the BOE cooled negative rates’ hopes.

Commodity-linked currencies are more likely to fall against their American rival if Wall Street comes under selling pressure. Higher yields will push USD/JPY up, no matter the outcome of the report. 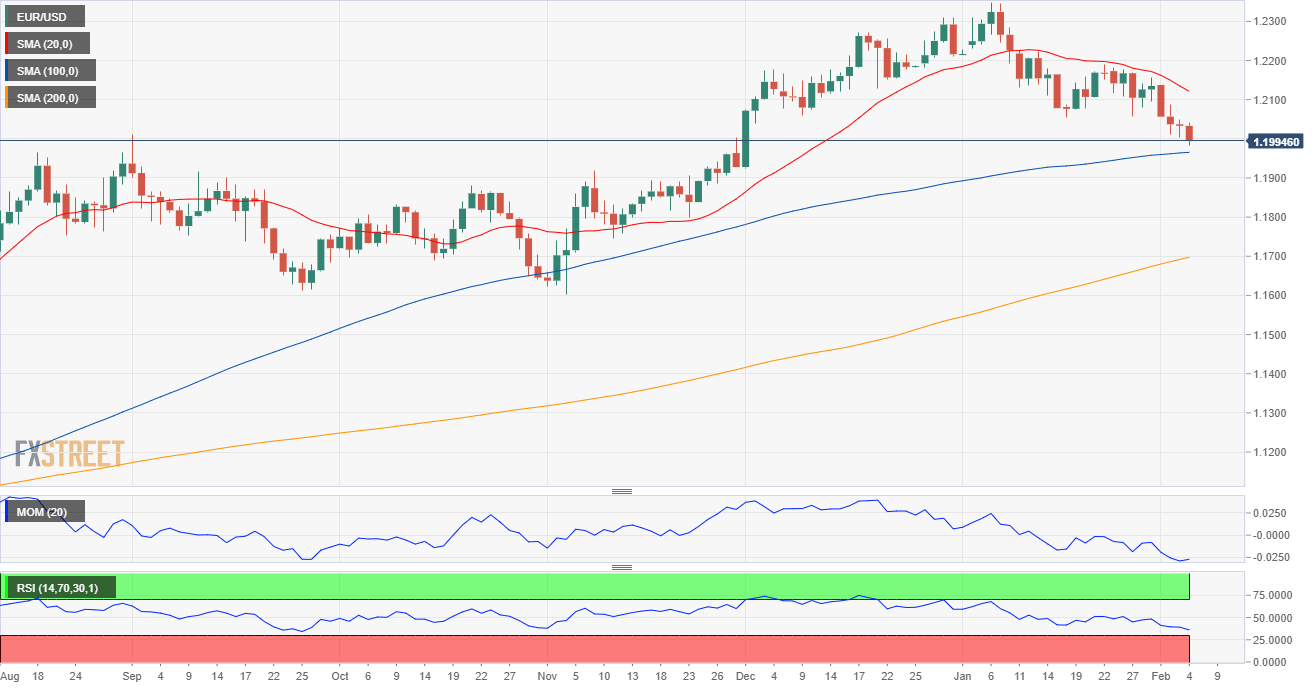 EUR/USD falls off 1.2050 amid mixed German CPI figures, ahead of US PMI

EUR/USD has dropped below 1.2050 as returns on US debt advance, supporting the dollar. German states have reported mixed CPI reads for February. The US ISM Manufacturing PMI and the ECB's weekly bond purchases are awaited.

GBP/USD retreats from 1.40 as US yields resume their rise

GBP/USD is trading around 1.3950 but off the highs. US bond yields have resumed their gains, boosting the dollar. The US ISM Manufacturing PMI and stimulus news are awaited. Markit's final UK Manufacturing PMI for February was revised up to 55.1 points.

Dogecoin on the verge of a 50% breakout

DOGE price is consolidating in a descending triangle pattern, hinting at a 50% breakout soon. It has slid below the support provided by the 50, 100, and 200 four-hour moving averages indicating a lack of buyers.

Gold gained some positive traction and recovered a part of Friday’s slump to multi-month lows. Retreating US bond yields weighed on the USD and extended some support to the commodity. The upbeat market mood might keep a lid on any meaningful gains for the safe-haven XAU/USD.

US Dollar Index struggles for direction just below 91.00 ahead of ISM

The greenback meets strong resistance in the vicinity of the 91.00 neighbourhood when tracked by the US Dollar Index (DXY) at the beginning of the week.