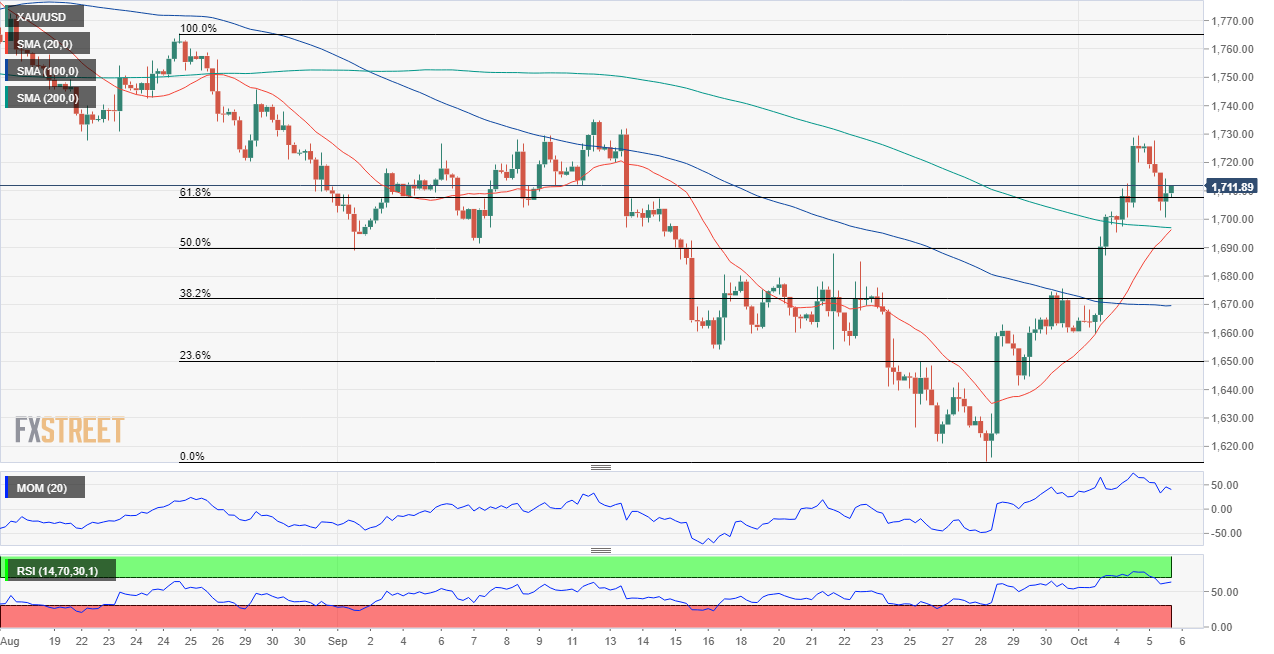 Spot gold gave up part of its weekly gains on Wednesday and dipped to $1,700.47 a troy ounce, quickly bouncing afterward towards the current $1,712 price zone. The American dollar made a nice comeback as the market sentiment deteriorated.

Chaos in the energy sector sets the market's tone

The dismal mood was triggered by the persistent conflict between the Western world and Russia after the latter invaded Ukraine back in February this year.  The European Union approved the eighth package of sanctions against Russia, including a price cap on Moscow’s crude oil and refined products. Russia’s Deputy PM Alexander Novak responded by saying his country is willing to cut production to compensate for price caps, adding an oil price of $70 per barrel would be comfortable.

At the same time, OPEC+ held a meeting in which they decided to cut oil production by 2 million barrels per day. The meeting included key ministers from the involved nations, usually known as the Joint Ministerial Monitoring Committee. Furthermore, they announced they would no longer meet on a monthly basis.

Meanwhile, European Commission President Ursula von der Leyen also announced the Union is ready to discuss a temporary price cap on gas used to generate electricity, while the US White House reported the Department of Energy would release another 10 million oil barrels from the Strategic Petroleum Reserve. In such a scenario, XAUUSD met modest demand on dips

Stocks fell on the news, helping the dollar to appreciate even against the safe-haven gold. However, an upbeat US ISM Services PMI brought back mild optimism. In September, the index printed at 56.7, better than the 56 expected. Wall Street trimmed a good part of its intraday losses, although the three major indexes remain in the red. The better tone of equities limited the dollar demand and helped XAUUSD to recover some $10.00.

The daily chart for the bright metal shows that XAUUSD is trading just above the 61.8% retracement of its $1,765.47/$1,614.81 slump at $1,707.70, also above a flat 20 SMA. The Momentum indicator maintains its bullish slope well into positive territory, but the RSI indicator has lost its upward strength and turned marginally lower above its midline. At the same time, the longer moving averages hold downward slopes far above the current level, all of which keep the risk skewed to the upside.

In the near term, and according to the 4-hour chart, bulls are in control of the pair. The intraday slide halted above a mildly bearish 200 SMA, but the 20 SMA keeps advancing and is about to cross above the longer ones. Meanwhile, technical indicators aim higher, well above their midlines, and after correcting extreme overbought conditions.