The dollar was on the rise again first thing on Tuesday morning, continuing its positive start to the new month and quarter. However, it started to fall back as the session wore on and this helped to keep gold bid. At the time of wiring, the yellow precious metal was trading around $1196 per ounce and therefore printing new highs on the week. In addition to the dollar easing back a little, gold may have been supported further by the mild sell-off in the equity markets.

Risk was off the menu earlier after the stock market rally – sparked by agreement of the new USMCA deal over the weekend – faded in New York trading yesterday. Investors’ focus returned to the other big trade dispute between China and the US, and to troubles in Italy. China has been a tough negotiator and a quick resolution in their dispute over trade looks unlikely in the near future, although Beijing’s decision recently to retaliate with lower tariff rates than had been originally planned was deemed to be a positive move. Meanwhile Italian concerns were again weighing on the euro this morning, before it bounced back by mid-day. Earlier, Italian government bond yields had climbed to their highest levels since 2014 amid concerns that the European Commission could reject the Italian budget as it is a relatively high deficit of 2.4% of their GDP.

Raised Italian concerns forced the EUR/USD to break down and when it sliced through that 1.1530 pivotal level we mentioned yesterday, this led to further technical selling as a cluster of stop orders that were resting below there were tripped. But the decent recovery that took place immediately afterwards meant that it was perhaps a false breakdown. It is now important to watch today’s close - if the EUR/USD finishes the day below this level then we can expect to see further losses in the near term outlook, while a close back above 1.1530 would confirm that it was indeed a false breakdown, which would thus point to higher levels going forward. If the EUR/USD were to rebound, then this would be a positive outcome for buck-denominated gold.

The fact that gold has been able to hold its own above the 61.8% Fibonacci retracement and support at $1180 following last week’s sell-off is a very positive sign. However, gold still needs to break and hold above major resistance in the $1205-$1215 range before we can be confident that a low has been formed. For now, we are moderately bullish, awaiting further confirmation. It is a good sign that the triangle breakdown has failed, suggesting bears may have gotten trapped. That being said, if gold were to break below that $1180 support then all bets would be off as we will then a have a new lower low, which would thus signal the resumption of the trend of price making lower lows and lower highs. 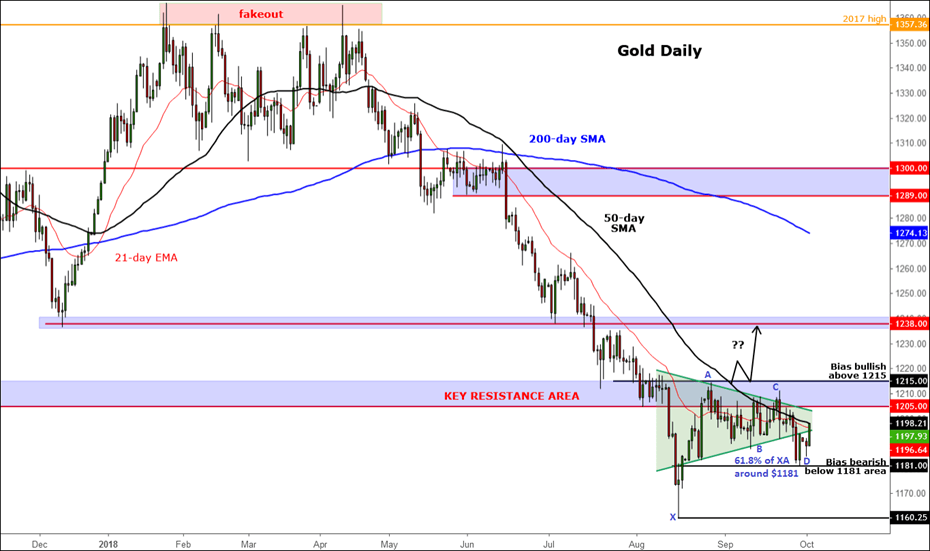