Rate hikes are coming to America – and that has supercharged the dollar higher. Can the Bank of England counter that move and shore up the pound? Alongside US Nonfarm Payrolls, there is room for extended volatility.

This week in GBP/USD: Powell shows a hawkish side

Powell powers up the dollar: The Federal Reserve left its policy unchanged, but made a notable change of tone toward the hawkish side. The main market-moving points that Fed Chair Jerome Powell made included not ruling out a rate increase at every meeting, thus more than four times in 2022. He also opened the door to 50bp rate hikes rather than standard 25bp.

On the economy, Powell said that there is "quite a bit of room to raise rates without hurting employment" and stressed that sustaining a long economic expansion means price stability. That is different than the previous focus on employment.

While stocks suffered mostly before the Fed, the dollar's surge came in response to the Fed's aggressive stance on inflation. GBP/USD dropped below 1.34 in a long response to the event.

For more, see Fed Analysis: Three dovish moves boost stocks, why more could come, why the dollar could rise

US Gross Domestic Product figures added fuel to the fire, coming out at 6.9% annualized in the fourth quarter, rather than 5.5% projected. Overall, the world's largest economy expanded at the fastest rate since 1984, despite higher inflation.

In the UK, the focus remained on politics. At the time of writing, Prime Minister Boris Johnson has weathered calls on him to resign and also a police investigation – on top of an inquiry made by a civil servant. The fascinating political drama had a negative, yet limited impact on sterling.

Tensions in the Russia-Ukraine front remained elevated, as diplomatic talks dragged on, while Russia continued amassing troops. It remains unclear what President Vladimir Putin wants, but hopes that an invasion would be at least delayed until after the Winter Olympics in Beijing seemed to keep markets calm about that topic.

On both sides of the Atlantic, COVID-19 cases have dropped from the highs, providing hope that the worst of the pandemic belongs to the past. That allowed GBP/USD to move to the tune of other events, most notably the Fed, as mentioned above. 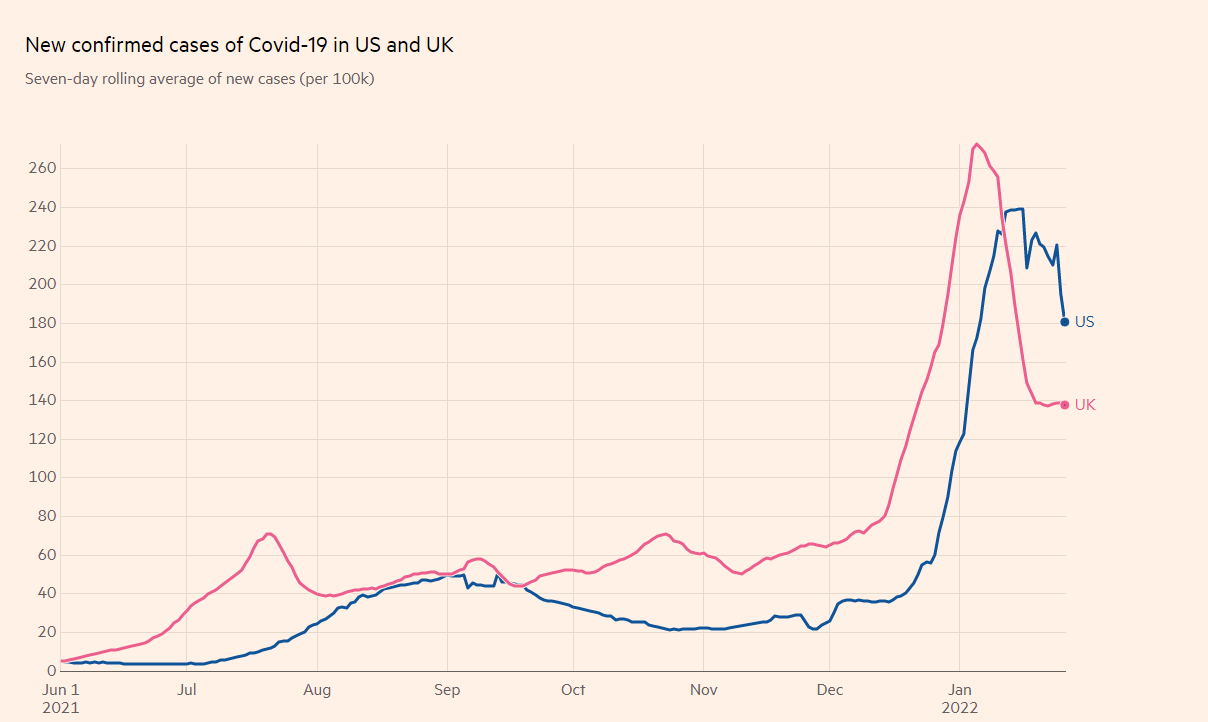 If PM Johnson is forced out, it would probably weigh on sterling in the short run, but the prospects of seeing Chancellor Rishi Sunak at No. 10 – or even less moderate Conservatives – would be comforting to markets. For that trading sterling, it is essential to note the timing of Prime Minister's Questions – Wednesday at 12:00 GMT – to know when British traders are distracted. However, without significant developments, political news would only be noise.

What would be significant news? Civil servant Sue Gray is set to publish her inquiry into the PM's parties, but the timing remains unclear. If she releases a bombshell that forced Johnson to quit, there could be jitters, but given the parallel police investigation, there could be delays.

The Bank of England's rate decision stands out on the economic calendar. The "Old Lady" is set to raise rates once again, from 0.25% to 0.50%. Such a move is fully priced in, and investors want to know what's next – even if they are skeptical of BOE Governor Andrew Bailey's words.

Signaling rate hikes and an upcoming squeeze to the bank's bond-buying scheme – currently standing at £895 billion – would boost the pound. If the BOE refrains from sending clear signals, its inflation forecasts in the Monetary Policy Report would stand out. It is essential to note that this is a "Super Thursday" event, also including a press conference, raising the chances of high volatility.

For more details see BOE Preview: Bailey needs to go beyond a rate hike to boost GBP/USD on Super Thursday

US events: Nonfarm Payrolls stand out

Will Russia invade Ukraine? Only Putin knows. For GBP/USD, the trade is simple – sell cable on any hostilities, as the safe-haven dollar benefits from such developments while Britain is dependent on gas that Russia exports. If tensions defuse, it is positive for the currency pair, albeit at a limited manner.

Assuming no substantial safe-haven flows due to events in Eastern Europe, the focus for the dollar is set to be domestic, with a busy week culminating in Nonfarm Payrolls.

The buildup begins on Monday, with the ISM Manufacturing Purchasing Managers' Index. ITt is set to remain at the 58 handle, which represents a robust expansion in the small, yet significant sector. The Prices Paid component, which represents inflation, may steal the show if it rises more than expected.

ADP's private-sector jobs report is of interest on Wednesday, despite the lack of correlation in the last report. America's largest payrolls firm reported a leap of 807,000 positions, while the NFP came out at a meager 199,000. A more modest increase of 250,000 is projected.

The ISM Services PMI stands out on Thursday. Here, the employment component is more relevant, as it has a satisfactory correlation wit the NFP. The relatively modest 54.9 level recorded in December broadly reflected the unimpressive jobs gain.

Finally, Nonfarm Payrolls for January 2022 are due out on Friday, and they are set to show an increase of 238,000. The Omicron covid variant has hurt the services sectors, causing temporary job losses. Cold weather also hurt. The silver lining could come from revisions to previous months, and for the dollar, from wages.

Average Hourly Earnings advanced by 4.7% YoY in December, and the economic calendar is now pointing to 5.1% annual growth. The unemployment rate is set to remain depressed at 3.9%, but surprises are common. 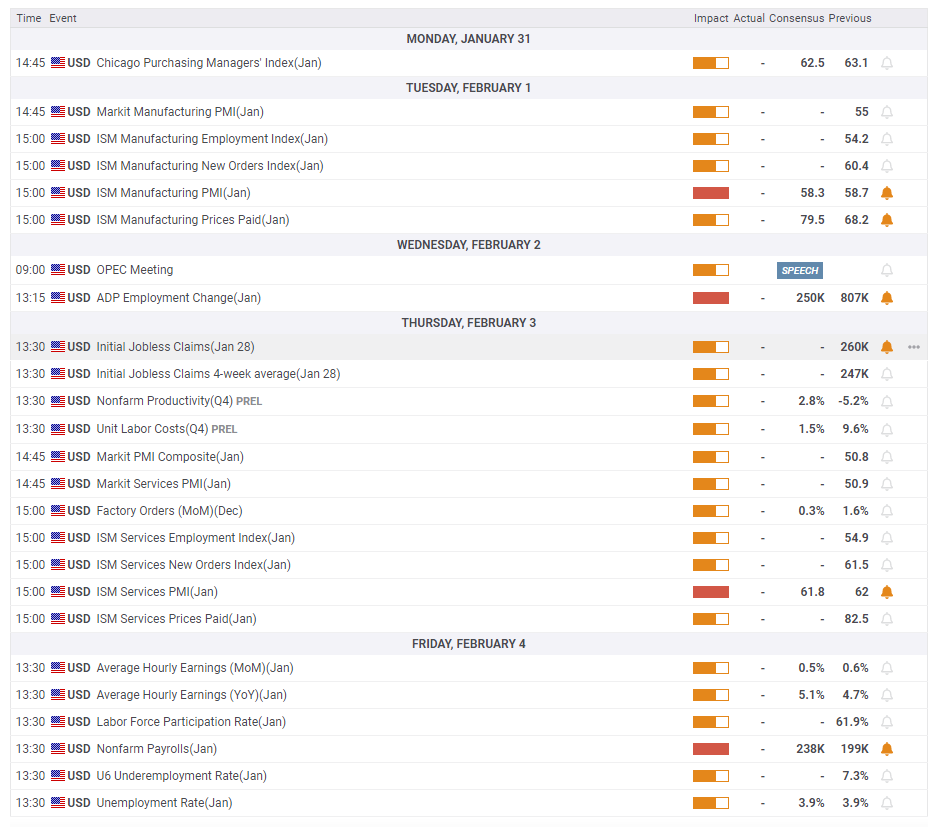 Sterling has been compared to an emerging market currency due to its high volatility – and a quick look at the chart justifies that. Bears took the reins when cable slipped off the steep uptrend support line, and are now in full control. The pair dropped below the 50-day and 100-day Simple Moving Averages, flipping momentum to the downside.

The BOE has significant hard-lifting to do given elevated market expectations, potentially resulting in a weaker pound. Low expectations from Nonfarm Payrolls open the door to a positive outcome, supportive of the dollar. All in all, after a short correction, GBP/USD could resume its downfall.

The FXStreet Forecast Poll is showing that experts foresee further downside pressure in the short term, a recovery later on, before another fall. Average targets have been downgraded in the past week. 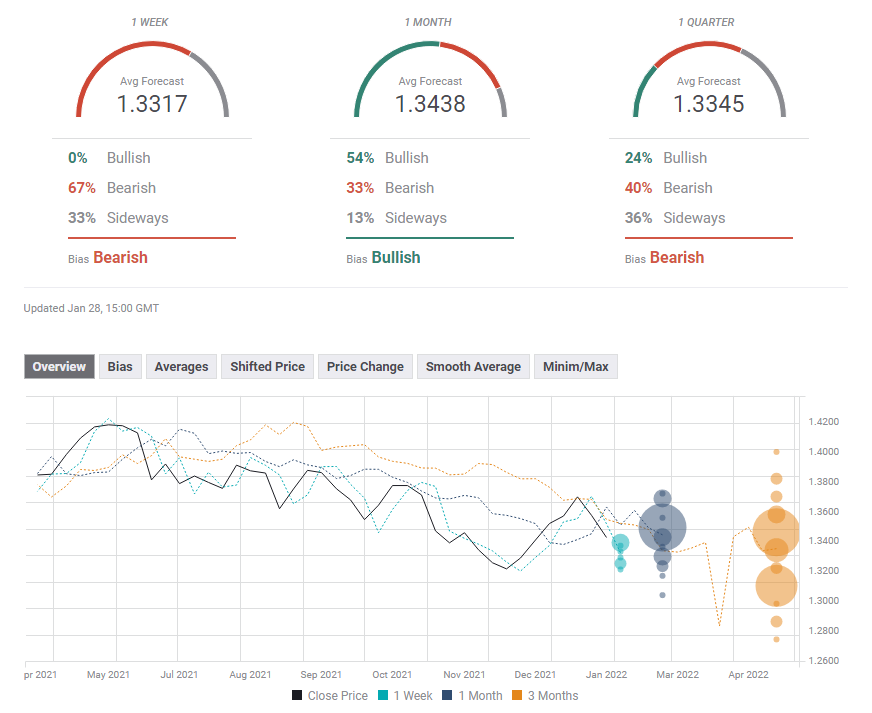