The "Big Bang" has turned into a fall to five-month lows for GBP/USD as covid cases in Britain and around the world trigger fear. Sterling traders eye Brexit news more keenly, and broader markets are closely watching the Fed's decision in the last week of July.

Freedom Day: UK Prime Minister Boris Johnson celebrated the abandonment of almost all coronavirus-related restrictions in self-isolation in an early sign things were not going well. Apart from Britain's leader, hundreds of thousands of Brits were also "pinged" by the system and required to quarantine.

This "pingdemic" exacerbated worries that the reopening would only cause economic harm due to a potential return to lockdown, and the pound struggled.

The UK is not unique in suffering from the rapid spread of the Delta variant, and broader markets have come to terms with the strain's stranglehold on the recovery. The upswing in US infections and their impact on the economy sent stocks tumbling and investors rushing to the safety of the US dollar. While shares bounced, the dollar held onto most of its gains. 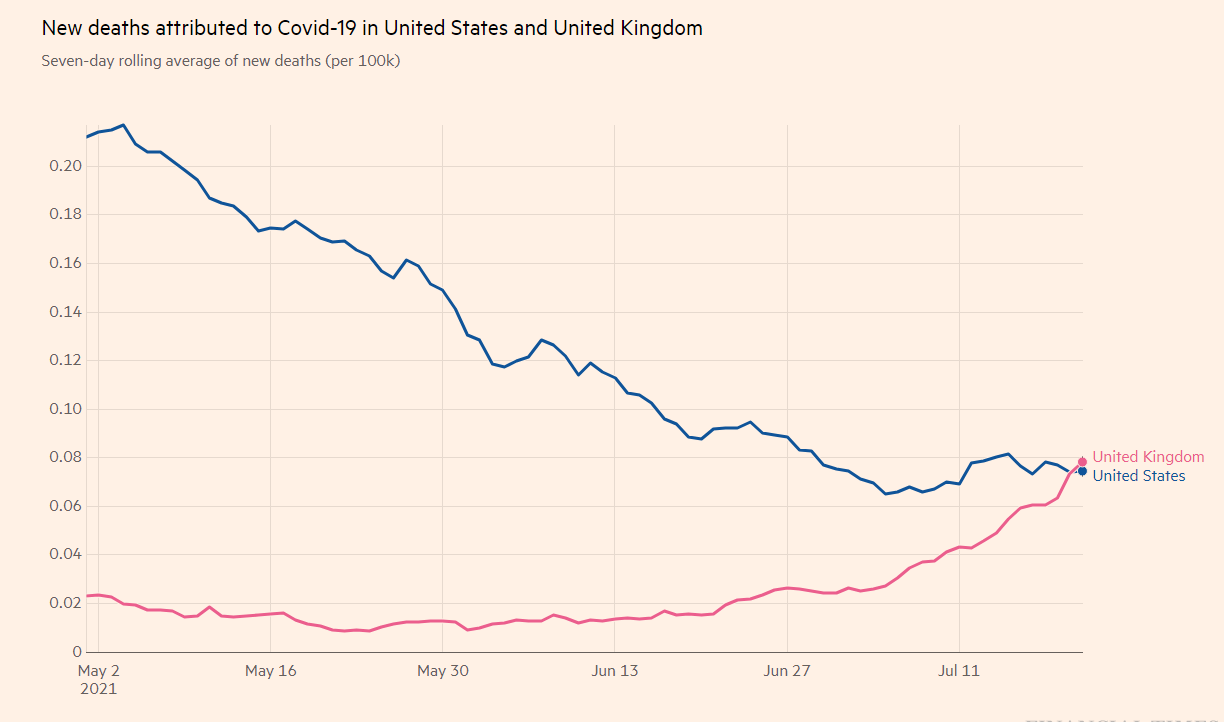 Brexit is back: Another factor that weighed on sterling is the neverending Brexit saga. Chief UK Negotiator David Frost officially announced that Britain wants to renegotiate the Northern Irish protocol agreed to in 2019. Brussels said, “No!” The row has limited impact on the British economy but could escalate and have a more significant impact.

Doves awaken: Both Jonathan Haskel and Ben Broadbent, two members of the Bank of England's Monetary Policy Committee, seemed in no rush to withdraw support from the economy. Their views contrasted with several hawks and pushed back on rate hike expectations. That pressured the pound as well.

In the US, the Federal Reserve is in its pre-decision "quiet period" – but data limited the dollar's advance. Weekly jobless claims topped 400,000, and New Home Sales missed estimates with 5.86 million in June.

The entire world is watching Britain's gamble – reopening the economy while the virus rages. PM Johnson bets that vaccination is sufficiently widespread to prevent the health system from collapsing. Nearly 70% of the population received at least one vaccine dose – an impressive feat – but the pace is slowing down.

Investors will want these charts to move up: 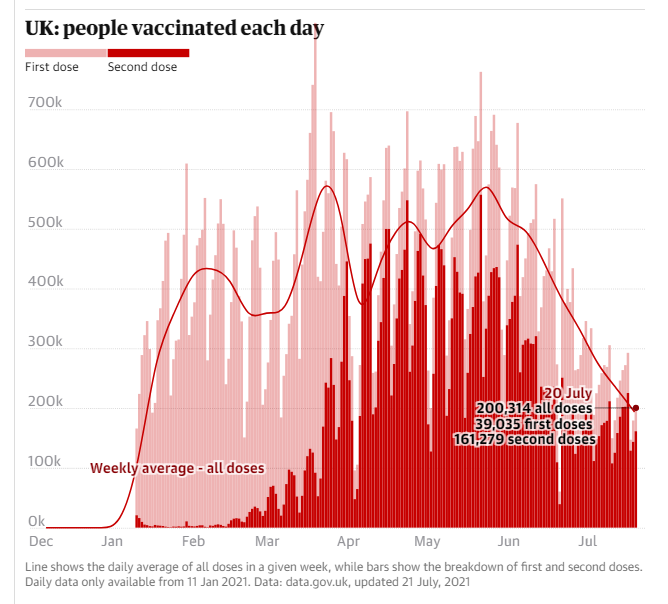 Apart from observing the state of vaccinations, cases, hospitalizations and deaths, markets will also be watching the impact of the "pingdemic" on the economy. If many are forced to self-isolate, the economy could come to a standstill even without a lockdown. However, the government could ease quarantine requests, at least for the fully vaccinated.

The reopening and new policies will likely continue having a significant impact on the pound.

Brexit is also set to remain in the headlines, but the noise coming from London and Brussels may be brushed aside once again. The lack of talks during the summer could help sterling edge higher, assuming no unilateral steps are taken.

Concerns that the UK would use an emergency legal tool to suspend the agreement or legal action by the EU could weigh on the pound. That could wait for later on.

The economic calendar is relatively light, and only BOE member Gertjan Vlieghe's speech stands out. After many of his colleagues clarified their stances, his position could also have a short-lived impact on sterling.

While Britain's decision to reopen the economy came as over half the population is fully vaccinated, America's take-up has stalled below that level. The pace of immunization is just above 500,000 – a rate last seen in January.

To mitigate the Delta strain, a pickup in jabbing is necessary. Pleas from President Joe Biden and health officials seem to have fallen on many deaf ears. A rebound in this chart could boost market sentiment and counter-rises in infections. That would weigh on the safe-haven dollar, yet the opposite scenario of more suffering seems more likely, at least in the upcoming week. 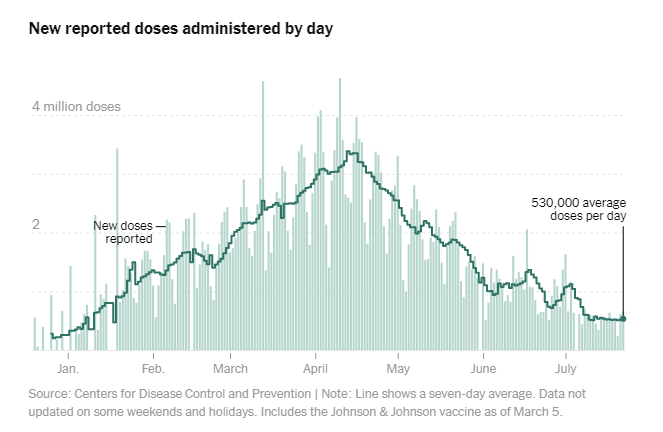 The virus' resurgence is one of the critical considerations in the Federal Reserve's meeting – the week's main event. Back in June, the Fed surprised markets by saying that the debate on tapering bond buys has begun – and by signaling two rate hikes in 2023. The hawkish tilt was driven by economic improvement and rising inflation.

Since then, price rises have risen even further, with the headline Consumer Price Index (CPI) hitting 5.4% YoY in June and Core CPI reaching 4.5%. However, while the Fed's intention to print fewer dollars resulted in a limited stock retreat and no "taper tantrum," investors are more nervous now. That could result in a more dovish message, supporting markets and weighing on the dollar.

Jerome Powell, Chair of the Federal Reserve, already took a more nuanced stance in his testimony early in July. While he said that inflation is "uncomfortably high," the world's most powerful central banker also seemed in no rush to withdraw stimulus.

Apart from the worrying spread of the virus, several economic indicators have been bumpy of late. Weekly jobless claims recently climbed above 400,000, forward-looking PMIs cooled from the highs, and consumer sentiment also reversed some of its gains.

Investors circled the Fed's Jackson Hole Symposium in late August as an opportunity for Powell to pre-announce a reduction of support, and they will be looking for hints for such a move already now. The mix of jittery markets, softer data and Delta could tilt Powell toward a cautious message. That would include downplaying inflation as transitory and emphasizing that millions of Americans are still out of work.

Apart from the Fed decision, top-tier figures are due out. Durable Goods Orders for June are forecast to show an increase in investment, and the data will help shape expectations for Gross Domestic Product figures released on Thursday.

Economists estimate the first and most market-moving GDP release to show a bumper annualized growth rate of 7.9% in the second quarter, up from an already robust 6.4% in the first. The rapid reopening was in full swing in the first half of the year, while the second part is highly uncertain.

Core Personal Consumption Expenditure (Core PCE) – the Fed's preferred measure of inflation – has likely accelerated in June beyond 3.4% YoY, which was recorded in May. Any deviation could impact the dollar just before the weekend. 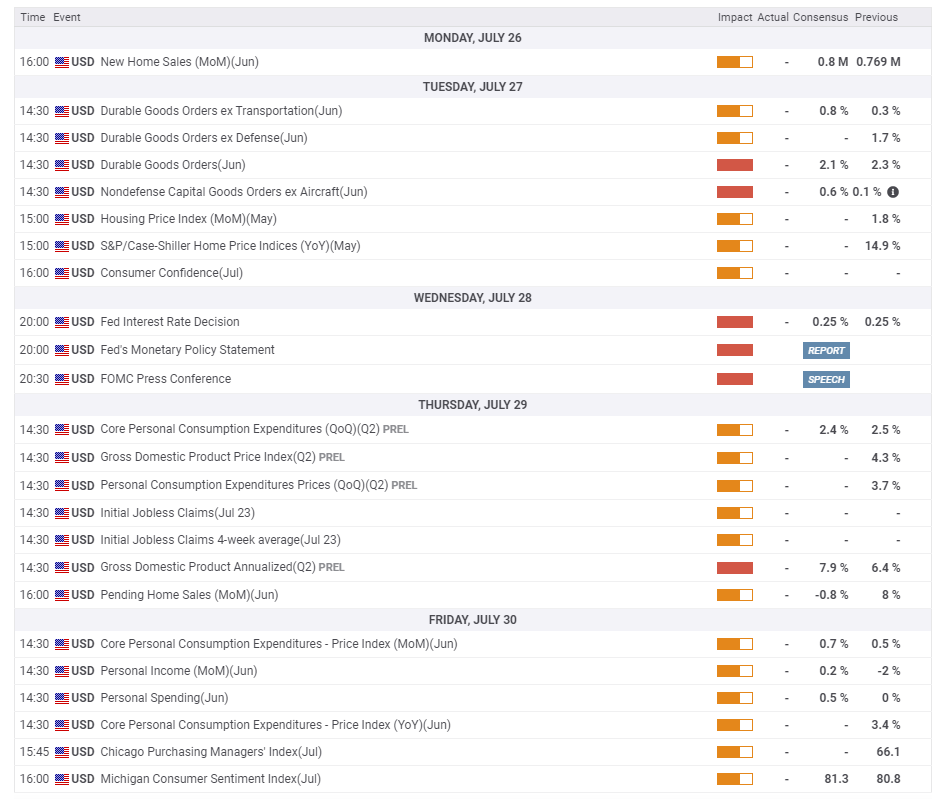 Pound/dollar is on the back foot, as the lower lows and the lower highs on the daily chart show. Momentum remains to the downside, and the pair is also trading below the 50-day and 100-day Simple Moving Averages. However, cable's recent rebound sent it above the 200 SMA, providing some hope for the bulls.

The former double bottom of 1.3670 still plays a role in cushioning cable. It is followed by 1.3570, July's bottom and also the lowest in five months. Beyond that point, 1.3450 is the next significant support line.

A dovish Fed decision and a potential improvement in Britain's covid data could help cable recover.

The FXStreet Forecast Poll is showing that experts are unmoved by the recent plunge under 1.36 and expect an attack on the highs once again – initially a gradual consolidation just under 1.38 and then a decisive move above 1.39. The price targets are little changed. 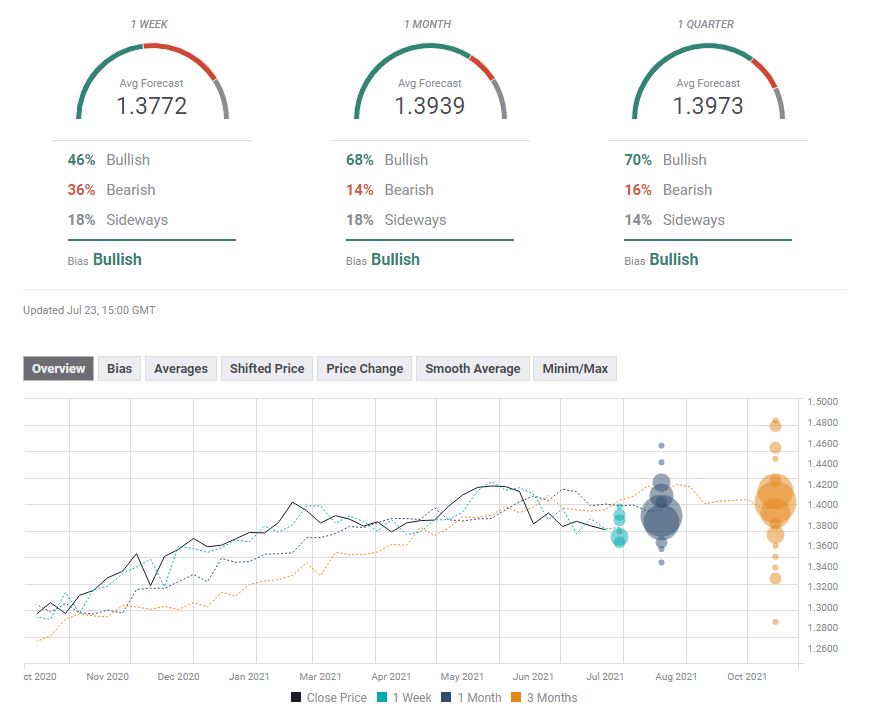