EUR/USD ended the week deep in the red, resuming the recent bearish momentum after witnessing a brief reprieve a week ago. The main currency pair failed to persist above the 1.0600 level and fell as low as 1.0382, hitting its lowest point since mid-June. Bulls managed to stage a comeback but retreated amid prevalent recession fears, which kept the sentiment around the US dollar buoyed throughout the week.

Speculation surrounding the Fed and ECB policy tightening path remained in play, as investors worried about aggressive rate hikes tipping the global economy into a recession. That said, a ray of hope did emerge from China that eased  inflation and growth fears, temporarily favoring dollar bears.

EUR/USD started the new week on the front foot, extending the previous week’s recovery momentum amid the continued US dollar correction, despite strong Durable Goods data. Risk flows dominated as investors reassessed odds of an economic slowdown heading into the annual three-day ECB Forum on central banking in Sintra that kicked off on Monday. China cut down on its covid quarantine restrictions for international travelers, which added to the market optimism.

From there, the major went on a downhill trajectory, however, as the dollar regained its footing across the board after Tuesday’s Conference Board's (CB) consumer confidence survey showed rising consumer inflation expectations. The gauge suggested that the Fed will need to maintain an aggressive approach to fighting inflation by delivering multiple rate hikes in the upcoming meetings, which spooked markets and revived the greenback’s safe-haven appeal.

Hawkish ECB commentary also failed to lure EUR buyers, as investors turned cautious in the lead-up to the super policy panel showdown at the ECB Forum mid-week. ECB President Christine Lagarde, BOE Governor Andrew Bailey and Fed Chair Jerome Powell participated in a debate about the outlook for central bank policy on Wednesday at Sintra. The discussion highlighted the divergence between the central banks, with only the Fed sticking to its hawkish stance, prioritizing inflation control over growth. Meanwhile, Lagarde failed to divulge much on the new anti-fragmentation tool and remained cautious amid expectations of higher inflation.

The sentiment around the EUR/USD pair continued to hinge on the policy contrast, as EUR/USD tumbled to two-week lows of 1.0382 before staging a solid comeback on softer US Core PCE inflation. The Fed’s preferred inflation gauge eased to 4.7% YoY in May, as expected, hinting at inflation peaking, which could lead the Fed to soften its aggressive rate-hike track. The US dollar corrected sharply from two-week highs, rescuing EUR bulls.

Although lingering recession fears returned to fore and lifted the dollar, as the shared currency is set to end the week sharply lower. Amidst notable dollar strength, EUR/USD extended its recovery towards 1.0500 after Eurozone Preliminary inflation surged to a new record high of 8.6% YoY in June vs. 8.4% expectations, making a compelling case for a 50 bps ECB rate hike in July. The core HICP softened to 3.7% in the reported month, missing the consensus forecast of 3.9%.

Fed vs. ECB and the US NFP

The underlying risk-off theme is likely to extend in the week ahead, with recession fears looming, the disparity in the monetary policies between the Fed and ECB could also have a significant impact on the pair. The Fed is set to release its June meeting’s minutes on Wednesday while the ECB account will be published on Thursday.

Investors could see a slow start to a critical week, as the US markets will be closed on Monday, in observance of Independence Day. Although Eurozone Sentix Investor Confidence will keep traders entertained. Tuesday also remains scarce, in terms of top-tier economic releases. Nevertheless, the euro area final Services PMIs and US Factory Orders will be reported. Wednesday’s German Factory Orders and EU Economic Forecasts will be eyed ahead of the US ISM Services PMI and the all-important FOMC minutes.

Traders will begin gearing up for Friday’s US Nonfarm Payrolls report on Thursday, with the US ADP jobs data dropping in ahead of the weekly Jobless Claims. The ECB policy accounts will also likely be closely examined for fresh insights on the central bank’s next policy move.

ECB Chief Lagarde will make an appearance at the Economic Meeting of Aix-en-Provence, in France on Friday. The main event risk of the final trading day of the week, however, remains the US labor market report, with the hourly earnings particularly in focus. 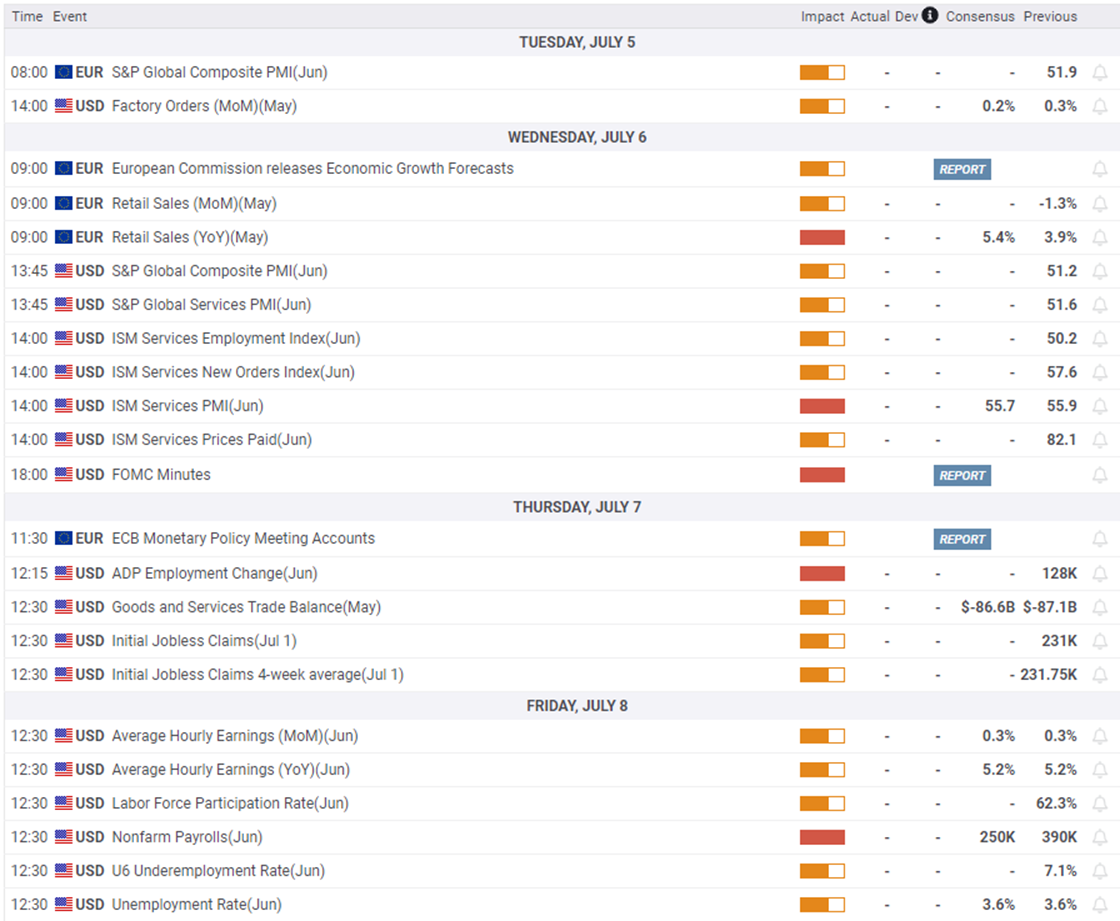 Bears are in the lead, but bulls refuse to give up.

The FXStreet FX Poll is showing that experts are bearish in the short-term, but expecting a significant recovery later on. Average targets have been relatively stable, despite the relative decline. 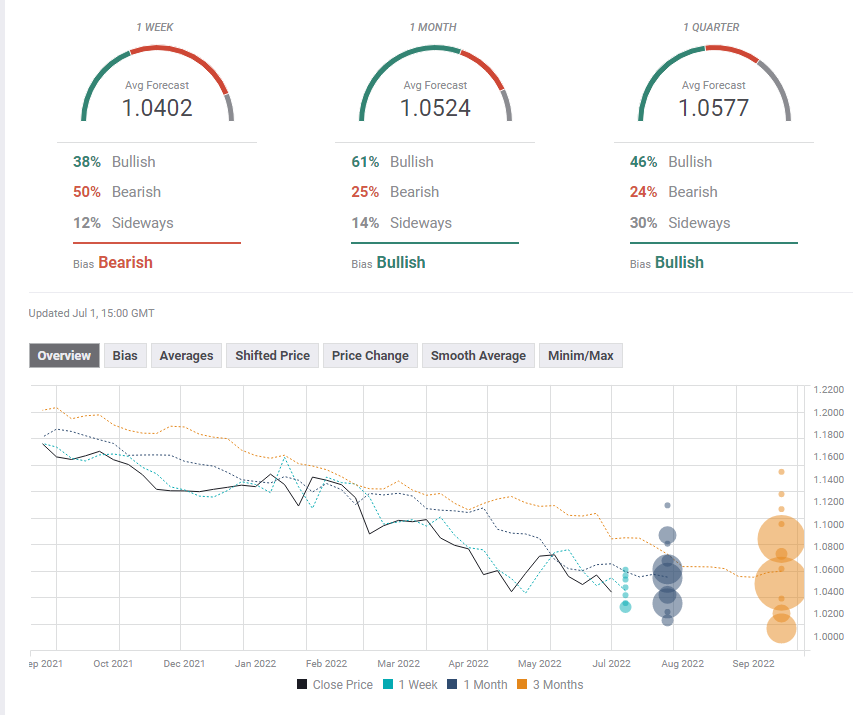 EUR/USD closes in on 1.0100 as dollar rally picks up steam

EUR/USD stays under heavy bearish pressure during the American trading hours and declines toward 1.0100. Despite mixed macroeconomic data releases from the US, the dollar rally stays intact with the US Dollar Index climbing to fresh multi-week highs above 107.00.

GBP/USD extended its daily slide and touched its weakest level since late July below 1.1970. The broad-based dollar strength, as reflected by a more than 0.5% increase in the US Dollar Index, forces the pair to continue to stretch lower in the American session.

Gold turned south after having advanced beyond $1,770 earlier in the day and dropped below $1,760. The unabated dollar strength and a rebound in the 10-year US Treasury bond yield from daily lows seem to be weighing heavily on XAU/USD.