The EUR/USD pair plummeted to 1.1846, its lowest in two months, and finished the week not far above such a low. The US Federal Reserve imprinted life to the FX board with a hawkish surprise, which boosted demand for the American currency.

Federal Reserve moving ahead of counterparts

The central bank shifted its cautious tone without much warning, forwarding chances of rate hikes. The dot-plot showed that most Fed officials expect to raise rates in 2023 twice from a previous stance of no hikes until 2024. The current monetary policy was left unchanged as expected.

Policymakers also lifted their economic projections. The Fed’s preferred measure of inflation -personal consumption expenditures- is seen rising to 3.4%, up from 2.4% in the March forecast. The central bank now expects 2021 Gross Domestic Product to grow 7% this year, while the unemployment rate has been downwardly reviewed to 4.5%.

Chair Jerome Powell noted that FOMC members were “talking about talking about” reducing the $120 billion a month in asset purchases amid progress due to the immunization campaign. Nevertheless, he also noted that the path of the economy would continue to depend on the pandemic developments and warned that economic projections should be taken with a “big grain of salt.”

The imbalance between central banks is clearly playing a role in the dollar’s recent strength, although it is not the only factor. The economic comeback is clearer in the US, amid a faster immunization campaign and the subsequent reopening. The EU is not far behind and made a movement toward speeding up its economic reopening. On Friday, the Union officially lifted travel restrictions for US residents.

Data wise, the EU published April Industrial Production, which was up a whopping 39.3% YoY. The Trade Balance surplus, however, decreased to a seasonally-adjusted total of €9.4 billion. Inflation in the Union was confirmed at 2% YoY in May. The German Consumer Price Index printed at 2.4% in the same period, as previously estimated.

In the US, May Retail Sales were down by 1.3% MoM, worse than anticipated, while housing-related data also disappointed.

Next Tuesday, Fed Chair Jerome Powell will testify before Congress. On Wednesday, Markit will publish the preliminary estimates of its June PMIs. The manufacturing sector is expected to have performed better than the services one, although the indexes for the EU and the US are foreseen well into expansion territory.

On Thursday, the US will publish the final version of its Q1 GDP and PCE inflation and May Durable Goods Orders. On Friday, the focus will be on the country’s May Personal Consumption Expenditures Price Index, previously at 3.6% YoY.

The EUR/USD pair fell for a third consecutive week, posting its largest weekly decline for 2021. The long-term picture suggests that further declines are likely as the pair settled just below the 61.8% retracement of its latest bullish run measured between 1.1703 and 1.2266.

Technical readings in the weekly chart favor a bearish continuation, as the pair has broken below a now mildly bearish 20 SMA, while technical indicators turned sharply lower, and are now within negative levels.

The daily time-frame also indicates that bears took control of the pair, which currently develops below all of its moving averages. Technical indicators partially lost their bearish strength near oversold readings but without signs of changing course. 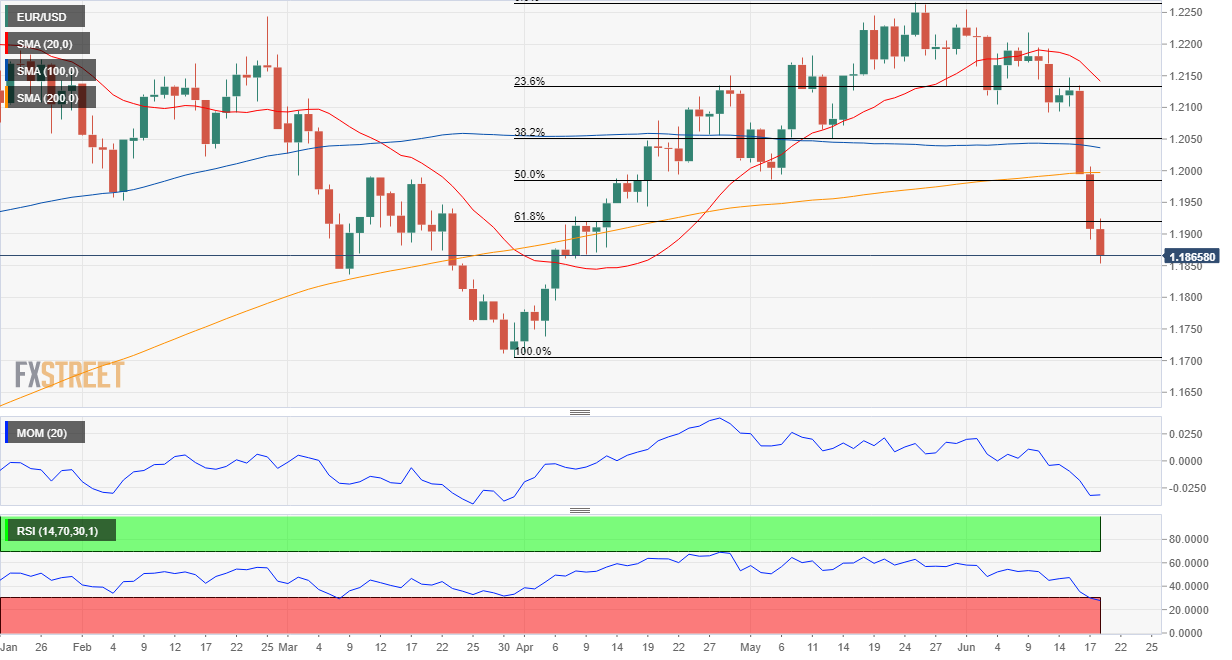 According to the FXStreet Forecast Poll, bears retain control of the pair, with 54% of the polled experts betting for lower lows. On average, the pair is seen at 1.1854, pretty much unchanged, as speculative interest still needs to finish digesting the latest Fed’s announcement. Bulls account for more than 50% in the monthly and quarterly views, with EUR/USD expected to recover above the 1.1900 area on average.

The Overview chart shows that the three moving averages have turned bearish after a long period of consolidation. Most targets accumulate around or below the current level in the weekly and monthly views, but those betting for another leg north are still the most in the longer-term perspective.

USD/JPY Weekly Forecast: A rising dollar is the summer’s treat

Gold struggles around yearly resistance line with eyes on Fed

Gold bounces off intraday low to extend the previous day’s recovery moves towards a one-year-old descending trend line. That said, the yellow metal picks up bids to $1,841 by the press time of Tuesday’s Asian session.