It was a good week for the shared currency, as it bounced back against its American rival. The EUR/USD pair fell short of recovering the ground lost in the previous weeks, anyway moving towards the two-year high of 1.2349.

A scarce macroeconomic calendar, uneventful central banks and coronavirus-related concerns offset hopes that vaccine immunization will soon put an end to the pandemic and let economies return to the growth path.

Joe Biden has become the 46th US president last on Wednesday, putting an end to the Trump-era. He signed several executive orders related to boost the fight against the coronavirus but also related to a key pipeline that carries Canadian crude into the US. President Biden decided to revoke the licence for Keystone XL, amid its controversial environment effects. Protecting public health and the environment are among Biden’s top projects. He returned the States into the Paris Agreement on climate change and pledged to return to the WHO.

There’s one thing, however, that Biden won’t change, and that’s the US relationship with China. The trade war is alive and kicking, under the shadow of the pandemic. Still, the relation between the two economic giants is nowhere near to getting better, moreover after China imposed sanctions to several Republicans on the final day of Trump in the office.

On Thursday, the European Central Bank had a monetary policy meeting. As widely anticipated, European policymakers left the current policy unchanged, foreseeing no changes to the current situation at least until March 2022. President Christine Lagarde repeated that the current policy would remain accommodative, but hinted no urgency on expanding stimulus.

Data wise, macroeconomic figures keep confirming that major economies are struggling to survive through the pandemic. Inflation in the Union held within negative levels in December, with the German annual CPI confirmed at -0.7% and the EU index at -0.3%.  The ZEW survey showed that Economic Sentiment in the Union improved to 58.3 in January and to 61.8 in Germany, although the assessment of the current situation remains near record lows.

Minor data from the US was mildly encouraging, as Initial Jobless Claims decreased to 900K in the week ended January 15, while December housing-related data showed signs of improvement.

On Friday, Markit released the preliminary estimates of its January PMIs. The EU readings showed that manufacturing activity remained within expansion levels, anyway retreating from December levels. On the other hand, the services sector was the most hit by the recent lockdowns in Europe, with Markit indexes indicating contraction. US figures were encouraging, as the Markit Manufacturing PMI for the same month improved to 59.1 while the services index came in at 57.5, both above the previous and beating the market’s expectations.

The US Federal Reserve is having a monetary policy meeting next Wednesday, the most relevant event of the week, although the central bank is expected to maintain its monetary policy unchanged. The US will publish December Durable Goods Orders earlier that day, seen posting a modest 0.9% advance. On Thursday, the country will release the preliminary estimate of the Q4 Gross Domestic Product, foreseen at 2.8% QoQ from 3.7% in the previous quarter.

Across the Atlantic, the macroeconomic calendar will be lighter. On Monday, Germany will publish the January IFO survey, while on Thursday, the EU will release its January Economic Sentiment Indicator. By the end of the week, Germany will unveil the preliminary estimate of its Q4 GDP, previously at 8.5% QoQ.

The EUR/USD pair heads into the weekly close trading at its highest for the week, a handful of pips below the 1.2200 figure. The long-term trend is bullish, as the pair has met buyers around the 38.2% retracement of its November/January rally at 1.2060, suggesting that the previous decline has been a mere correction. The pair is now struggling to stabilize above the 23.6% retracement of the mentioned rally at 1.2172.

The weekly chart shows that the pair has continued developing well above a bullish 20 SMA, while the longer moving averages remain far below the current level, irrelevant at the time being. Technical indicators have resumed their advances within positive territory, although they remain below their recent highs.

A bullish continuation remains unclear according to the daily chart, as technical indicators have recovered from multi-week lows, but remain within neutral levels and without clear directional strength.  The pair is developing above bullish 100 and 200 SMAs, but the 20 SMA is directionless a few pips above the current level, indicating bulls are still hesitating.

Bulls will have better chances should the pair extend its advance beyond 1.2222, January 13 daily high and the immediate resistance level. Above it, 1.2300 and 1.2350 are the next levels to watch. A bullish breakout beyond the latter opens the door for an extension towards 1.2413, April 2018 monthly high.

Below the mentioned Fibonacci support level at 1.2060, the pair has room to test the 1.2000 figure and even temporarily extend its slide below it. Nevertheless, the pair would need quite a catalyst to break this level, unclear at the time being. 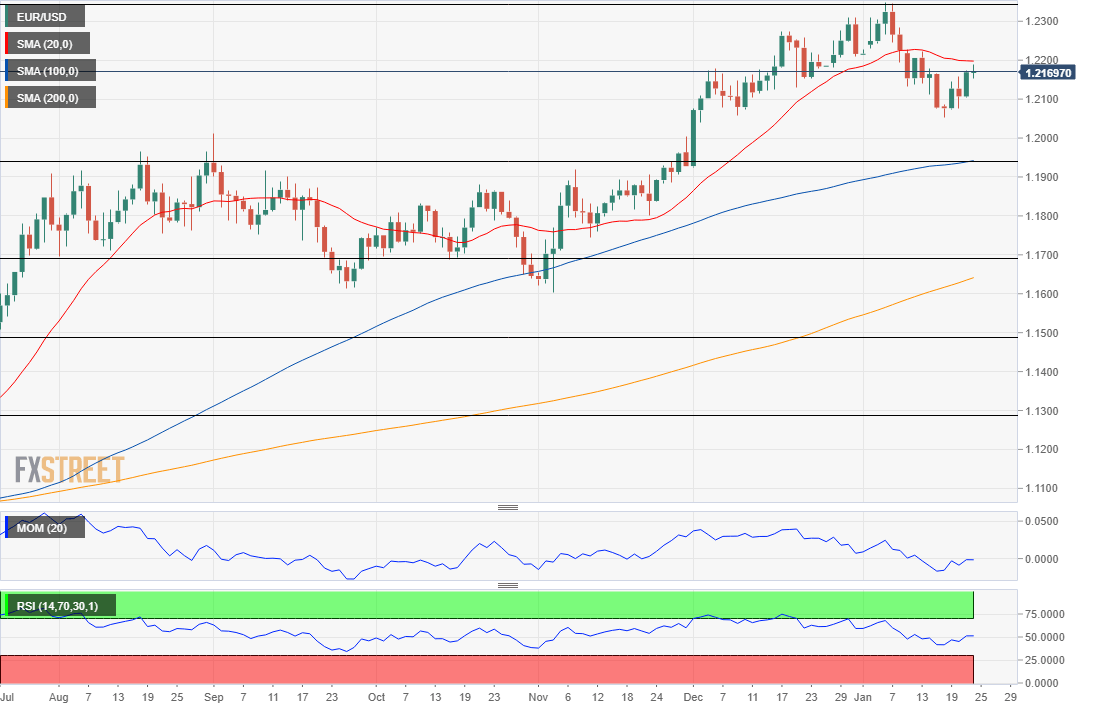 According to the FXStreet Forecast Poll  the EUR/USD pair is expected to ease within range during the next few weeks, as bears are a majority in the weekly and the monthly perspectives. Selling interest decreases to 34% of the polled experts in the quarterly view, although the pair is still seen holding within familiar levels in the 1.2100 price zone.

The Overview chart shows that moving averages lack directional momentum, but also that more targets accumulate around or above the current level. Those betting for slides below 1.1800 are still quite a few, while chances of an advance towards the 1.24 region continue to increase.

Stock markets are on the back foot amid concerns of higher US capital tax increases and rising covid cases in Asian countries. Cryptocurrencies are suffering an extended sell-off. PMIs from Europe, the UK and the US stand out.