The EUR/USD pair reached fresh July highs on the last trading day of the month, settling just below the 1.1900 level.  The pair has advanced ever since the week started but gained momentum on Wednesday after the US Federal Reserve smashed the dollar.

No time for tapering

The US central bank left its monetary policy unchanged, as expected, and noted that the economy has continued to progress but noted that “substantial further progress” toward the Fed’s goal of stable prices and maximum employment has not yet been achieved. “We are not there yet,” said Chairman Jerome Powell in the Q&A that followed his speech. Market participants were hoping for some clues on how and when the US central bank will start to reduce its bond-buying programs launched to support the economy through the pandemic.

One thing the Fed actually did was establishing Standing Repo Facilities for banks to exchange bonds for cash. Powell announced they would conduct separate domestic and international facilities. “These facilities will serve as backstops in money markets to support the effective implementation of monetary policy and smooth market functioning,” the statement read.

The American currency fell in the Fed’s aftermath as stocks rallied on relief. US indexes held around all-time highs, as the US central bank is in no rush to retrieve financial support.

US economic growth in a plateau

Worse than anticipated data in the US added to USD weakness. The country published the preliminary estimate of the second quarter´s Gross Domestic Product, which showed that the economy grew at an annualized pace of 6.5%, below the expected 8.5%. Q1 GDP was downwardly revised to 6.3%.  Durable Goods Orders were up a modest 0.8% in June vs the 2.1% expected, while the core reading came in at 0.3%. Initial Jobless Claims for the week ended July 23 printed at 400K, while the previous weekly figure was upwardly revised to 424K. The US economic comeback reached a plateau. Data confirmed it, and the Fed knew beforehand.

On the other hand, the EU is in the middle of its recovery process. Germany published the preliminary estimate of July inflation, with the Consumer Price Index surging 3.8% YoY. Growth in the country was tepid, as the second quarter GDP came in at 1.5%, missing the expected 2% but below the previous -2.1%. For the whole Union, GDP in the same period improved from -0.3% in Q1 to 2% QoQ. Also, the EU Unemployment Rate contracted to 7.7% in June from 8% in the previous month. Finally, the Economic Sentiment Indicator in the EU improved to 119.0 in July, surpassing the expected 118.5.

Meanwhile, the number of new coronavirus contagions is on the rise in Europe and the US due to the rapid spread of the Delta variant. Vaccination has slowed in the US, while it continues in the EU. Both economies have immunized roughly 50% of their population with at least two shots.  If the situation continues, it will pose a risk to the economic comeback at both shores of the Atlantic.

What’s next in the calendar?

The upcoming week is a busy one, with the focus on US employment data. The country will publish on Wednesday the ADP survey on private jobs creation, foreseen at 600K. On Thursday, the country will release weekly Initial Jobless Claims and Challenger Job Cuts ahead of the Nonfarm Payroll report, out on Friday. At the time being, analysts foresee that 926K new jobs were added in July. The monthly employment report could be a game-changer if the number surpasses the 1 million threshold.

Beyond employment figures, the US will also publish the official July ISM indexes on manufacturing and services output, while Markit will release the final versions of its July PMIs.

Germany will publish June Retail Sales on Monday, while the EU will do it on Wednesday. EU’s Markit PMIs for July will be out on Monday and Wednesday.  By the end of the week, Germany will release June Factory Orders and Industrial Production for the same month.

Technically, the weekly recovery seems a mere correction in the wider perspective. The pair keeps developing below the 61.8% retracement of the March/May rally at 1.1920. In the weekly chart, the 20 SMA maintains its bearish slope around the 50% retracement of the same rally at 1.1985. Technical indicators stand within negative levels, with the Momentum modestly recovering but the RSI still flat.

The pair offers a mildly positive stance in the daily chart, as it is advancing above a flat 20 SMA, currently providing dynamic support at around 1.1820. The longer moving averages remain directionless around the 1.2000 area, while technical indicators recovered ground but lost momentum just above their midlines. 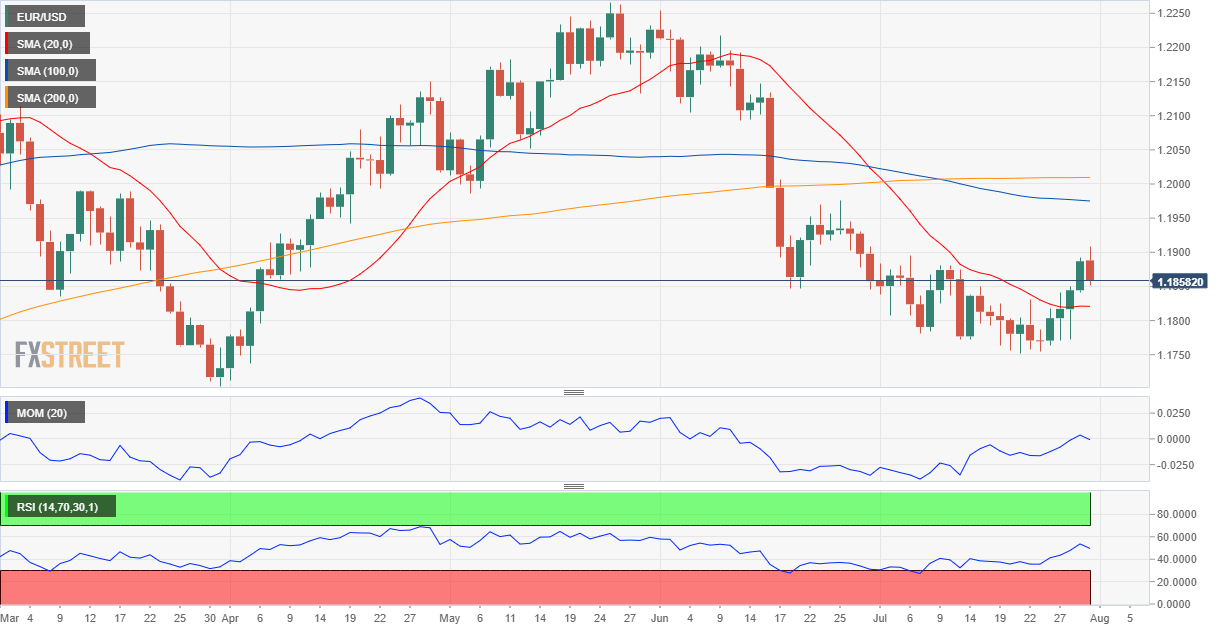 According to the FXStreet Forecast Poll, the EUR/USD pair would consolidate in the near-term, as the number of bulls equals that of bears. The pair is seen on average trading just ahead of the 1.1900 level. The number of bears overlaps that of bulls in the monthly perspective, but those going long are looking for higher targets, lifting the average to 1.1917. The pair is bullish in the monthly perspective, as bears decrease to 27%, with the pair seen near 1.2000.

According to the Overview chart, it seems that bulls are slowly coming back. The moving averages turned higher, with different degrees of strength. The weekly moving average is the one showing the strongest momentum, with the long-term media still showing a limited bullish potential.

USD/JPY Weekly Forecast: The view ahead is the same as the view behind

GBP/USD Weekly Forecast: Will the Bank of England step out?

EUR/USD has tumbled below 1.17, hitting the lowest since August 20 as Europe struggles with soaring gas prices and China suffers power cuts. ECB President Lagarde said the economy needs help. Fed Chair Powell is set to and US Consumer Confidence is also eyed.

GBP/USD has plunged under 1.36, the lowest in 10 weeks. Markets are in a sour mood as China suffers from power outages. The British army is on standby to mitigate fuel shortages. The pound ignores the hawkish comments from BOE Governor Bailey.

Gold is off the lows but remains vulnerable amid the underlying narrative the Fed could announce a sooner-than-expected rate hike, as the TIPS market has also started pricing in higher future inflation.

Why is Apple stock falling?

Apple stock (AAPL) took the rise in bond yields poorly on Monday as tech stocks and the Nasdaq suffered disproportionally. The Nasdaq closed the worst performing index of the day -0.81% while the Dow was actually positive and the S&P 500 lost just over a quarter of a percent.