The EUR/USD pair is ending the week around the 1.1200 level, holding on to familiar levels throughout the week. The dollar started it with the wrong footing, as hopes of a soon-to-come economic recovery began diluting, on the back of resurging coronavirus cases in the US.

Risk-aversion was the main theme these last few days, briefly interrupted by comments from US White House trade adviser Peter Navarro, who implied late on Monday that the US-China trade deal had fallen apart. The initial reaction was a panic selling and a run to safety, quickly reverted as he rectified his words. Even further, US President Trump rushed to Twitter, saying that “The China Trade Deal is fully intact. Hopefully, they will continue to live up to the terms of the Agreement!”  Equities surged, helping EUR/USD to reach a weekly high of 1.1348.

Risk-aversion on fears related to a second coronavirus wave

For the pair, it was downhill from there, as fears mounted with the US reporting record new coronavirus cases two days in-a-row. According to the latest data available, the country had over 40,000 new cases on Thursday. The greenback benefited from its safe-haven appeal, although its gains were limited, as is not only the US that’s seeing a future economic comeback delayed. To a lesser extent, coronavirus cases are also rising in the EU, with roughly 20,000 new cases a day reported. The situation, however, seems better controlled than across the Atlantic.

Governments and central banks had continued to make announcements related to supporting the financial system. The US government is said to be working on a stimulus package of $1.3 B, while the ECB announced a Eurosystem repo facility for central banks (EUREP) introduced as a precautionary backstop to address pandemic-related euro liquidity needs outside the euro area, according to the official release. But these measures are just patches that neither solve the problem nor boost growth.

Good macro numbers are not enough

Hopes at the beginning of the week were underpinned by nice surprises from the Markit PMIs, as the June preliminary estimates for both economies were much better-than-expected, slowly nearing expansion territory. Yet such positive numbers were overshadowed by the resurgent number of coronavirus contagions. Beyond a bounce in business activity, US weekly unemployment figures remained at stubbornly high levels, as 1.48 million people claimed for benefits in the week ended June 19.

The upcoming week will be a busy one. The EU and Germany will publish the preliminary estimates of their June inflation, while Germany will also unveil May’s Retail Sales. The week will be shortened by a holiday in the US on Friday, which means that the monthly Nonfarm Payroll Report will be out next Thursday. The country is expected to have recovered 3 million jobs in June, while the unemployment rate is seen retreating from 13.3% to 12.2%.

On Wednesday, the US Federal Reserve will unveil the Minutes of its latest meeting, while the US will publish the official ISM Manufacturing PMI for June, foreseen at 47.6 from 43.1 in the previous month.

The EUR/USD pair has traded within its previous weekly range, and as said, is ending the current one with modest gains just above the 1.1200 level. The weekly chart shows that it met sellers again around a flat 200 SMA, while the pair keeps struggling to advance beyond a mildly bearish 100 SMA. The 20 SMA heads marginally higher well below the current level, while technical indicators remain within positive levels, although lacking enough momentum to support an upcoming rally.

In the daily chart, however, the risk is skewing to the downside. The pair has spent the last two trading days below the 20 DMA, which slowly losses its bullish strength. Technical indicators have continued to give up, now lacking directional strength within neutral levels. 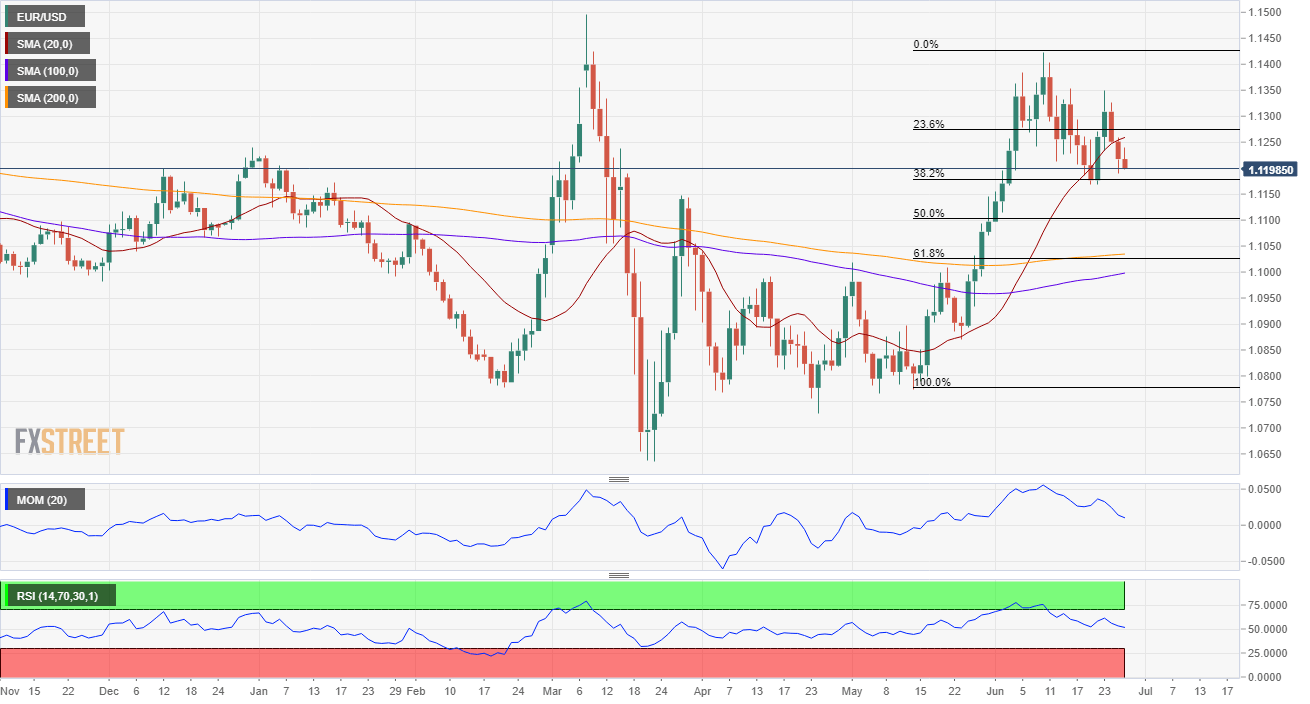 The FXStreet Forecast Poll shows that the sentiment is bullish in the short-term, as bulls are a majority in the weekly perspective. On average, however, the pair is seen holding around 1.1200. In the monthly view and the quarterly one, bears take the lead, representing over 60% of the polled experts. With a few exceptions, the pair is seen holding around the current levels and above 1.1000.

The Overview chart shows that, while the range may widen in time, investors are not willing to risk a trend. For the upcoming months, the pair is seen inside the 1.05/1.15 range, expanding towards the downside as time goes by.