It was a rough week for the common currency, as persistent tensions between the US and China kept high-yielding currencies away from speculative interest's radar. The EUR/USD pair fell, trimming most of the last two-week gains and losing the 1.1200 figure, also undermined by softer-than-expected Chinese data, which revived concerns about the global economic slowdown, and, as the Union stands at the edge of the cliff, was among the most affected.

The dollar, on the other hand, benefited not only from safe-haven demand but also from encouraging macroeconomic figures that temporarily overshadowed chances of a recession, despite US Treasury yields fell to flirt with yearly lows.

After last week's decision of hitting China with more tariffs, US President Trump this week made a couple of announcements that clearly show he is all about China. The first announcement was risk-positive, as the US administration decided to delay new levies on European cars' imports for six months. Late Wednesday, he also declared a national emergency over threats against American technology, clearly alluding China, as later in the day, the US Department of Commerce added Huawei Technologies and its affiliates to the Bureau of Industry and Security (BIS) Entity List, making it harder for the company to do business with US counterparts.

China didn't stay quiet and retaliate, by announced tariff between 5% and 25%  on over $60 billion worth of US goods, but given that it didn't catch the market off-guard, the effect on financial markets was limited.

European data failed to impress, as the preliminary estimates of Q1 GDP for the EU and Germany came in both at 0.4%, matching the market's expectations. The German ZEW Survey showed that Economic sentiment deteriorated in May, with the index down to -2.1 in Germany, and to -1.6 for the whole Union.

US Retail Sales fell by 0.2% in April, while Industrial Production in the country shrank by 0.5%, triggering a short-lived dollar's decline. Thursday data was a bit more encouraging, as Housing Starts and Building Permits were up monthly basis by more than anticipated in April, while unemployment claims for the week ended May 10 decreased to 212K, better than the 220K expected. Also, the Philadelphia Fed Manufacturing Survey came in at 16.6, much better than the previous 8.5 and above the forecasted 9.0.

This upcoming week will bring the final version of German's Q1 GDP, foreseen unchanged at 0.4%, alongside preliminary Markit PMI for May, for the Union and the US. This last will unveil April Durable Goods Orders by the end of the week. Also, the FOMC Meetings' Minutes will be out this next week, although no big surprises are expected there.

In the weekly chart, the 20 SMA has extended its slide below the larger ones, all of them far above the current level. Technical indicators in the mentioned chart hold within negative levels, the Momentum lacking directional strength but the RSI turning lower at around 40, all of which maintains the risk skewed to the downside. The mentioned 20 SMA stands at 1.1295, with a weekly close above it being a first warning signal for long-term bears.

In the daily chart, the pair failed to sustain gains above a now bearish 20 MA, which converges with the mentioned Fibonacci resistance at around 1.1190, while the 100 and 200 DMA maintain their bearish slopes far above the current level. The Momentum indicator turned sharply lower and entered negative territory, while the RSI indicator slowly grinds south at around 40, supporting a bearish continuation.

Beyond the yearly low, the pair has room to extend its decline toward 1.1060 initially, to later approach the 1.1000 figure. This last will be a tough level to break, psychological support that if broken, could unwind a panic sell-off. To the upside, the key resistances come at 1.1245, and the 1.1320 area, with gains beyond this last not yet seen. 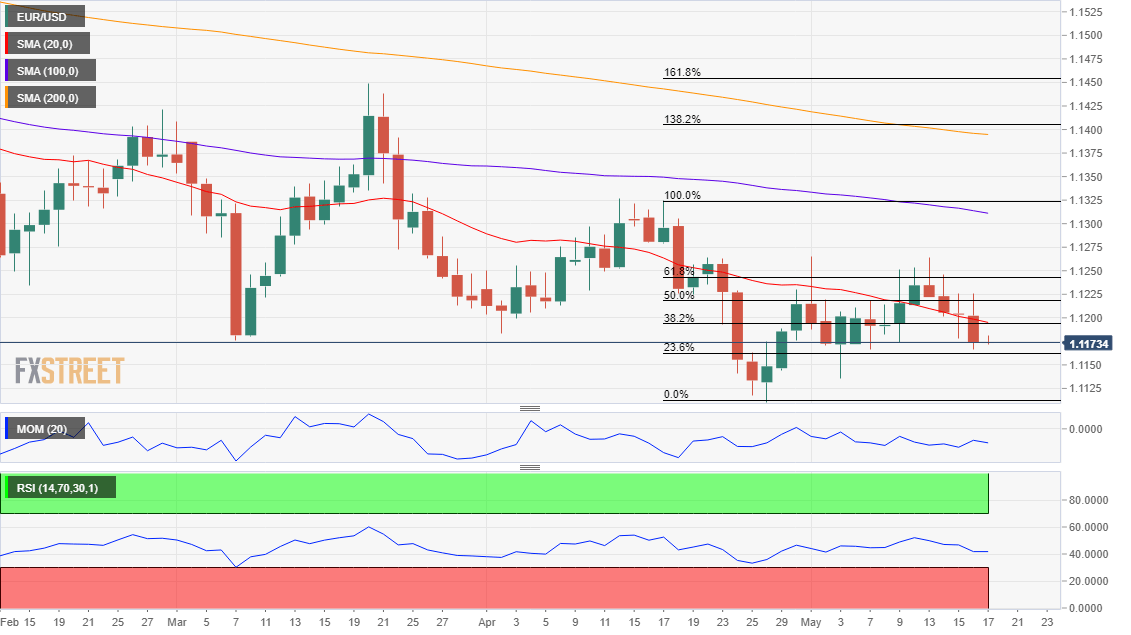 The FXStreet Poll shows a decidedly bearish bias on EUR/USD in the short term, a neutral stance in the medium term and experts remaining bullish with a long-term target of 1.1229. The average targets have not moved that much in the past week.