The EUR/USD pair is closing a second consecutive week with gains at around 1.1070, retreating from a high at 1.1109. A scarce macroeconomic calendar kept the pair in a dull range during the first half of the week, also the wait and see stance ahead of the ECB monetary policy decision on Thursday. One done, one to go, as the US Federal Reserve will be announcing its decision on monetary policy next Wednesday, September 18.

The European Central Bank cut rates to  -0.5%,  as expected, also announcing an open-ended QE of €20 billion per month starting  November 1st. Policymakers also introduced a reserve system that would exempt part of bank holdings from negative rates. According to Draghi, the decision was the result of underlying inflation remaining generally muted, and the risks surrounding growth outlook remain tilted to the downside. The ECB downwardly revised its forecasts on European growth and inflation.  Within the press conference, Mario Draghi

The announcement sent the EUR/USD pair to 1.0926, its’ yearly low, but bounced sharply from the level to close the day with substantial gains, as the news boosted risk-appetite, in detriment of the greenback. Speculative interest now believes that the large stimulus package announced by EU central bankers has put pressure on the US Federal Reserve, as the American Central Bank is now expected to deliver a steeper rate cut next week.  Such idea was reinforced by a tweet from US President Trump, who once again, attacked Powell & Co.,  stating that “European Central Bank, acting quickly, Cuts Rates 10 Basis Points. They are trying, and succeeding, in depreciating the Euro against the VERY strong Dollar, hurting U.S. exports.... And the Fed sits, and sits, and sits. They get paid to borrow money, while we are paying interest!” He also referred to US policymakers as “boneheads,” in a separated tweet.

The reaction to the ECB’s decision seemed overstretched, and the pair began correcting Friday, using US neutral data as an excuse, as August Retail Sales in the country were up by 0.4%, doubling the market’s expectations, while the Retail Sales Control Group came in as expected at 0.3%. The US also published the preliminary estimate of the September Michigan Consumer Sentiment Index, which came in better-than-anticipated at 92.0 further underpinning the American currency.

And now comes the Fed. The central bank is scheduled to meet next week, with little other relevant events ahead of it. Market players are anticipating a 25pb rate cut, and a statement that doesn’t commit to more rate cuts.  This past week, US inflation gave encouraging signs as the core annual CPI printed 2.4% in August, up for a third consecutive month. However, core PCE inflation, Fed’s favourite inflation measure stood at 1.6% in July, according to the latest available data. Doesn’t seem to be a reason to cut more than those 25bps expected.

Fed Preview: Far more than a rate cut – Five scenarios for the dollar

In Europe, the macroeconomic calendar will include the September ZEW Survey, with the economic sentiment in the country seen improving modestly to -38.0, while the Union will unveil the final version of August inflation, seen up by 0.2% in the month. Nevertheless, and given that the ECB has recently announced its monetary policy decision, the report will likely have a limited impact on the EUR.

The EUR/USD is trading at around the 61.8% retracement of its latest daily decline, having failed to sustain gains above it for the third time in the last two weeks. The bearish case remains firmly in place in the weekly chart, given that the pair is developing below all of its moving averages, and that the Momentum indicator keeps sliding into negative ground. The 20 SMA stands at around 1.1190, while the RSI hovers within negative levels, currently at 42.

In the daily chart, the pair is just above a mild-bearish 20 SMA while far below the larger ones. Technical indicators hold within negative levels, the Momentum aiming higher but the RSI flat at 48, all of which suggest that the upward potential remains limited.

The pair has bottomed twice a 1.0926 this September, but a double bottom figure is still unclear. The spike above the neckline was unsustainable, therefore diminishing the relevance of the figure. As it happened last week, the 1.1000 level is the immediate support, and below it, the next relevant one is the two-year low at 1.0926, followed by the 1.0820/40 price zone. 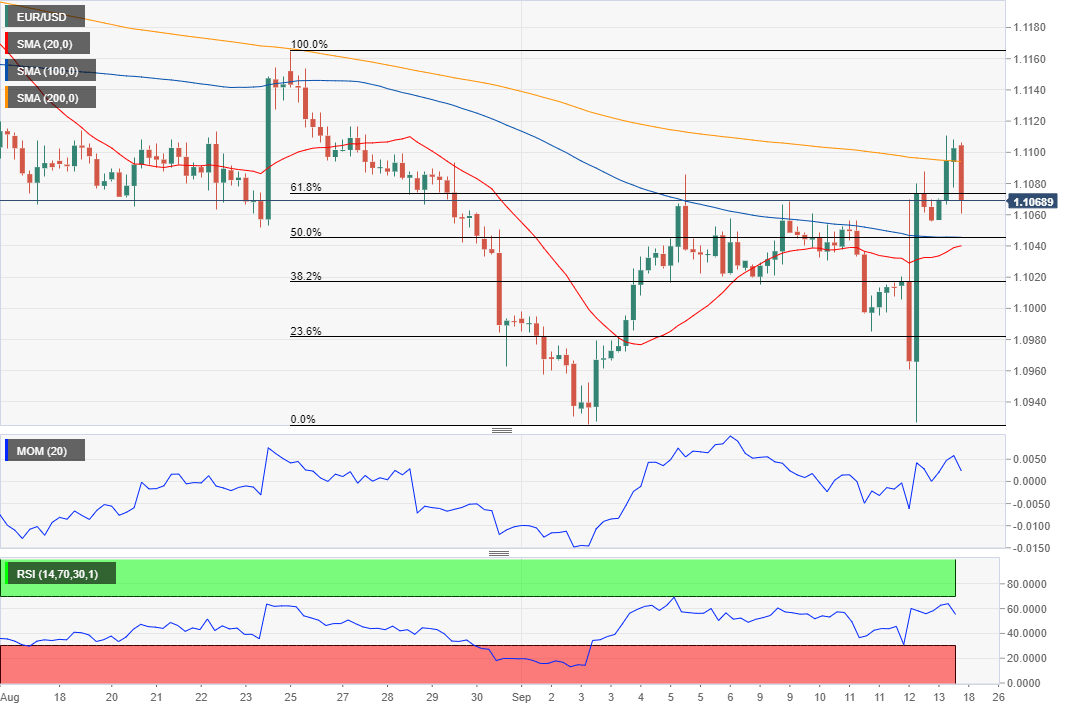 The FXStreet Forecast Poll shows that bears retain control of the pair, with sentiment neutral in the weekly perspective, but bearish in the longer ones. The number of bears is at 71% in the monthly view, decreasing to 64% in the quarterly perspective. In both cases, bulls are below 30%, indicating no buying interest around.

The Overview chart shows that the moving averages are bearish although with uneven strength, still indicating that there’s room to the downside. The number of targets below 1.0800, however, are quite limited, becoming a new psychological barrier. In the weekly and monthly charts, most targets accumulate around the current level, with a well-limited spread of possible targets, a sign that investors are waiting for some additional clarity, something that the Fed will provide this week.