What a start to 2020. By the end of two weeks of numb market’s due to winter holidays, US President Trump ordered the killing of  Iranian general Qassem Suleimani, accusing him of being  a “blood-thirsty terror.” Panic took over, safe-haven run, and retaliation came quite fast, although quickly followed by a deescalation of hostilities. The American dollar suffered a bit on Monday, but it was all uphill since then, ending the week with a strong tone against most major rivals.

The EUR/USD pair, which flirted with the 1.1200 level at the beginning of the week, is ending it below 1.1100, as the greenback found additional support in upbeat data, and even retained its strength despite a miss in employment data.

The release of the once market-shaking Nonfarm Payroll report ended without a fuss after it showed that the US added 145K new jobs in December, below the 164K expected, while the unemployment rate remained steady at 3.5% meeting the market’s forecast. Wages were also below the market’s forecast, increasing by just 2.9% YoY against the previous 3.1%, while when compared to the previous month, they were up by just 0.1%.

Digging deeper into a data, quite a positive surprise came from the final versions of December Services Markit PMI, which suffered upward revisions from their preliminary estimates, a light of hope in the growth front, particularly for the Union. US official ISM Non-Manufacturing PMI surprised to the upside, while European Retail Sales increased by more than anticipated.

In between, political uncertainties, the old and the new ones continue to overshadow data and to lead the way. Nevertheless, macroeconomic figures are the most objective measures of economic health, and while the short-term market’s action depends on politics, long-term trends are more linked to data.

The upcoming week will include some relevant figures, as the US will release its final December CPI and December Retail Sales.

Germany and the EU will also publish an update in inflation, while on Friday, attention will centre on the US Michigan Consumer Sentiment Index, seen in January at 99.4 from 99.2 previously.

More relevantly, the US and China are expected to sign phase one of the trade deal. The signing ceremony is scheduled for January 15 at the White House.  For sure, the beginning of an agreement is already priced-in, and unless a sudden disruption, the market should show no reaction to the event.

The EUR/USD pair is at weekly lows just below 1.1100 and seems it could slide further ahead of the close, to set closer to the 1.1065 critical static support.

Weekly basis, the pair is holding above a flat 100 SMA which stands around the mentioned support, while technical indicators have lost the positive momentum seen a couple of weeks ago, heading south within neutral levels. The pair has spent most of the past year developing far below its 100 and 200 SMA, with the shortest still gaining downward traction, indicating that bears retain the long-term lead.

In the daily chart, the positive momentum seen by the end of  December is completely gone. The pair is back below its 20 and 200 SMA, while the 100 SMA stands directionless in the 1.1060 area, reinforcing its relevance as support. Technical indicators in the meantime, head south within negative levels.

The pair can approach the 1.1000 figure, although a break of the critical psychological level is unclear. Below it, 1.0878, last year low, is the next relevant support/bearish target. Resistances come at 1.1130 and 1.1200 with sellers happily adding around this last if reached. 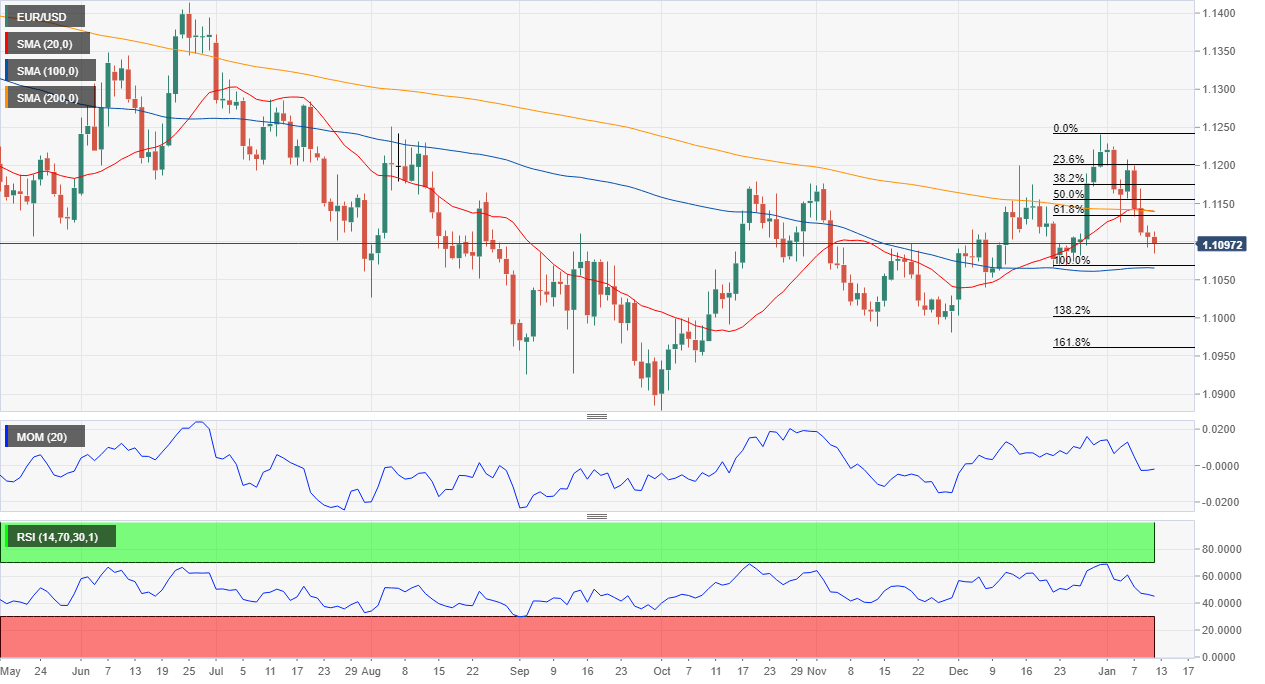 The FXStreet Forecast Poll continues to reflect uncertainty rules. The pair is seen bearish next week, although the average target is just below the 1.1100 level. The pair is seen recovering in a month, but the average target is 20 pips away from that of the weekly one, at 1.1112. Bears are back in the longer perspective, but just by little, as they account for the 43% of the polled experts, while those going long are at 41%.

The Overview chart shows that the pair will likely remain below the current level next week, but above it in the following weeks. The quarterly chart shows a large dispersion with no level outstanding. Nevertheless, in this last time-frame, the moving average is bearish, indicating that the sentiment favors additional dollar gains.