Choppy price behavior has dominated the EUR/USD pair these last few days, although it spent the week within the previous one’s range, meeting sellers around 1.1280 and holding above July’s low of 1.1192. For the pair, the week was all about central banks and monetary policy. The greenback start the week with a weak tone, but gained against its European rival on comments from ECB’s Francois Villeroy, who said that the central bank’s mandate has nothing to do with the exchange rate, later adding that monetary policy can’t do everything, and cannot repair protectionism damage, somehow hinting that policymakers can do little about the global economic slowdown that hits all major economies. On Thursday, he confirmed the idea saying that policymakers don’t have many options to deal with an undeniable downturn in the global economy.

The dollar tumbled Thursday following comments from NY Fed’s Williams, who said that it’s better to take a preventative approach to rates than to wait for “disaster to unfold,” although a representative of the organism later clarified that such words were not referred to whatever the central bank can do this July, but it was an academic speech on 20 years of research, giving the greenback a chance to recover part of the ground lost. Comments from Fed’s Bullard early Friday further supported the greenback, as he said that a 25bps rate cut this July would be appropriate, as the current situation doesn’t warrant a larger cut.

Speculative interest is unable to decide which central bank will be more prejudicial for its local currency, therefore the lack of a clear direction for the EUR/USD.

Meanwhile, trade tensions between the US and China persist. Mid-week, US President Trump said that there’s a long way to go with the Asian country, indicating no progress in trade negotiations. At the beginning of the week, China released its Q2 GDP, which came in as expected at 6.2%, posting the slowest pace of growth in 27 years. But President Trump has many other war fronts opened: geopolitical tensions with Iran mounted, despite this last willingness to reach an agreement, leading to sharp losses in oil prices. The US also excluded Turkey from the Joint Strike Fighter programme and plans to move the supply chain away from Turkish manufacturers by March next year, as the troubled country is also working with Russian defense, in anti-aircraft missiles. There were no fresh news on the US threat about imposing tariffs to the EU made earlier this month, but that’s yet another front opened.

Trade tensions prevail, affecting economic growth. Central bankers have conservatives approaches to monetary policy amid such slowing growth, but as Villeroy said, they don’t have enough tools to counter protectionist. In the long run, the scale is modestly leaned in dollar’s favor, just because Fed’s members, or at least most of them, suggest a conservative approach to easing.

In respects of data released these days, the German ZEW survey showed that economic sentiment in the country fell to -24.5, worse than anticipated, further fueling concerns and sending local government bond yields near record lows. German PPI fell by more-than-anticipated in June, down monthly basis by 0.4%.  EU inflation came in at 1.3% YoY in June, although the core reading resulted as expected in 1.1%, not a game-changer for the ECB. In the US, on the other hand, Retail Sales beat expectations in June, although housing-related data disappointed once again. Us Industrial Production remained flat in June, while Capacity Utilization shrank to 77.9% in the same month.

This upcoming week will be fulfilled with first-tier data that can paint a clearer picture for the pair. Markit will release the preliminary estimates of July Manufacturing and Services PMI for both economies,  which could confirm, or deny that the EU economy has already bottomed. Germany will offer the IFO survey, a barometer of local business confidence. The US will also publish June Durable Goods Orders, seen modestly up, and more relevantly, the preliminary estimate of Q2 GDP. The American economy is expected to have grown by 1.9% in the three months to June, following a 3.1% advance in the first quarter of the year. In the middle of the week, the ECB will have a monetary policy meeting. The central bank is expected to maintain rates unchanged, but it’s also expected to hint more stimulus coming, probably in September, as there are no signs the economic situation would improve any time soon. Head’s Draghi degree of dovishness could determine EUR/USD direction.

The EUR/USD pair is trading at around 1.1230/40 ahead of the close, with modest losses but as said, within the previous weekly range. In the weekly chart, the pair presents a neutral-to-bearish stance, as it is hovering around a mild-bearish 20 SMA, while technical indicators hover around their mid-lines with modest downward slopes, lacking directional conviction. In the same chart, the 200 SMA is flat at around 1.1340, while the 100 SMA turns modestly lower some 400 pips above the current price. The pair is in a long term consolidative phase near yearly lows, with the risk still skewed to the downside.

The daily chart shows that selling interest aligned around a bearish 20 DMA  sent the pair lower, with the level reinforced by the 38.2% retracement of the latest daily decline. The pair is now developing also below a bearish 20 SMA and the 23.6% retracement of the same slide. Technical indicators head in diverging directions but within negative territory, with the Momentum lagging amid the strong daily opening, but the RSI heading south at 46, this last anticipating a downward extension ahead.

The bearish potential will likely accelerate if the pair breaks below 1.1180, the immediate support, with the next relevant level being 1.1106, this year low. Below this last, the 1.1020/40 area comes as the next possible bearish target. The main resistance is 1.1280 where the pair topped these last two weeks, with gains above it favoring a recovery up to the 1.1340/60 price zone. 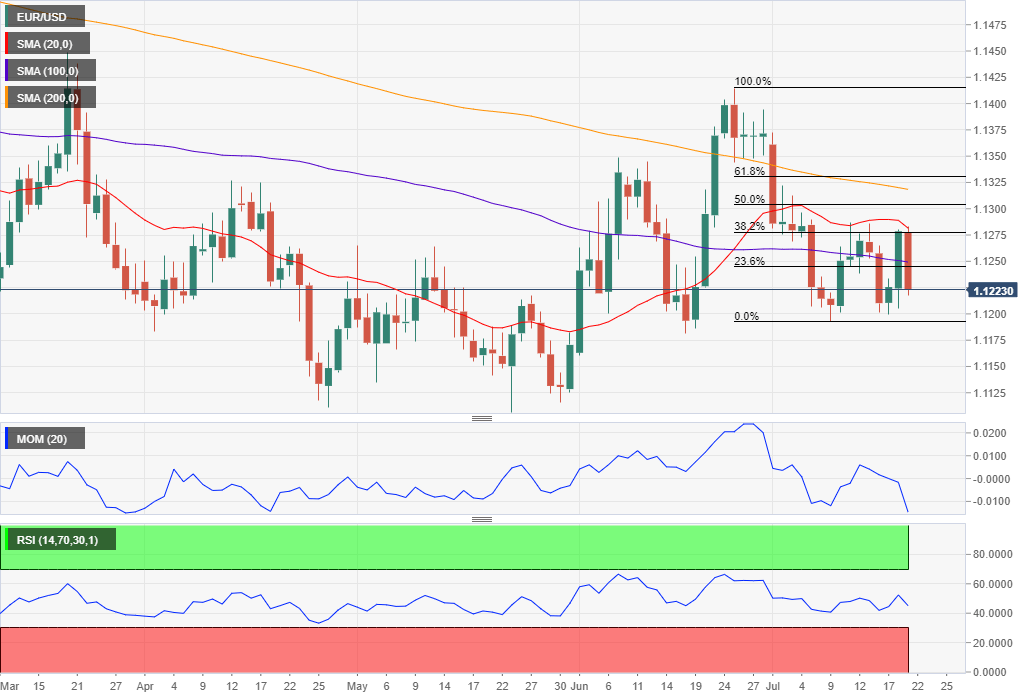 The FXStreet Forecast Poll indicates that bull took over EUR/USD, with the sentiment positive in the three time-frame under study. The number of those betting for an advance decreases from 78% in the weekly perspective to 54% in the monthly and quarterly ones. For the upcoming week, the average target is 1.1277, which increases to 1.1323 for the three-month estimate.

The Overview chart shows that the largest accumulation of targets comes just above the current level in the weekly and monthly views, while in the larger perspective, most polled experts are seeing the pair between 1.10 and 1.14, with a few exceptions pointing for higher targets above 1.15.  The moving averages lack directional momentum although in the shorter term, are slowly turning south, reflecting that bulls are not yet fully convinced.