The USD/JPY pair has traded in a roughly 120 pips’ range these last few days, finishing it little changed just below the 108.00 figure, yet not before establishing a fresh July low of 107.20. The ongoing global economic downturn kept fueling demand for safe-haven assets, although yen gains are partially offset by record highs on Wall Street.

US indexes hesitate this past week, amid mixed messages from Fed’s official about the central bank’s approach to rates cuts. Policymakers are certain that some “preventive” action is required, although it’s still unclear whether the central bank will cut by 25bps and stand pat, or if it will be more aggressive, cutting by 50bps before the year ends. Nevertheless, not only the US central bank is in the easing path, and “easy money” maintained equities near records, despite some dismal earnings reports.

Growth and the Fed leading the way

Uncertainty about what the Fed will come up with next have favored demand for government debt, alongside persistent fears of a global economic slowdown. Treasury yields fell sharply, recovering from weekly lows just modestly, to end the week with losses.

Further fueling growth concerns, the Japanese Merchandise Trade Balance posted a larger-than-expected surplus of ¥589.5B, but as a result of an unexpected drop in imports, down by 5.2% when compared to a year earlier. Exports also declined in the same period by more-than-anticipated, falling by 6.7%. National inflation rose in June by 0.7% YoY as expected, although the core reading, which excludes volatile food and energy prices, resulted in 0.5%, below the market’s forecast of 0.6%. Core inflation in Japan slowed to its weakest in almost two years.

The Bank of Japan’s massive stimulus program seems to be doing to push inflation higher, and speculation is that policymakers will have no choice but to expand stimulus.

The macroeconomic calendar will include this week the preliminary Nikkei Manufacturing PMI for July, seen recovering modestly to 49.7, still in contraction territory, the final version of the Leading Economic Index for May, and  July’s Tokyo inflation, seen steady at 1.1% YoY. The US will offer Markit PMI for July, June Durable Goods Orders, to end the week with a bang by releasing the preliminary estimate of Q2 GDP, seen at 1.9% vs. the previous 3.1%.

The USD/JPY pair trades at around 107.60 and with a bearish stance in its weekly chance, as it keeps developing far below all of its moving averages, and with the 20 SMA gaining bearish strength below the larger ones. Technical indicators in the mentioned chart have extended their declines within negative levels, further supporting the negative case.}

The daily chart shows that the pair is stuck around the 23.6% retracement of its July’s decline. The 20 DMA is flat at around 108.10, while the 100 and 200 DMA maintain their bearish slopes well above the shorter one. Finally, technical indicators hold within negative levels, the Momentum heading marginally lower and the RSI seesawing around 40, rather reflecting the latest bounce than suggesting an upcoming recovery. 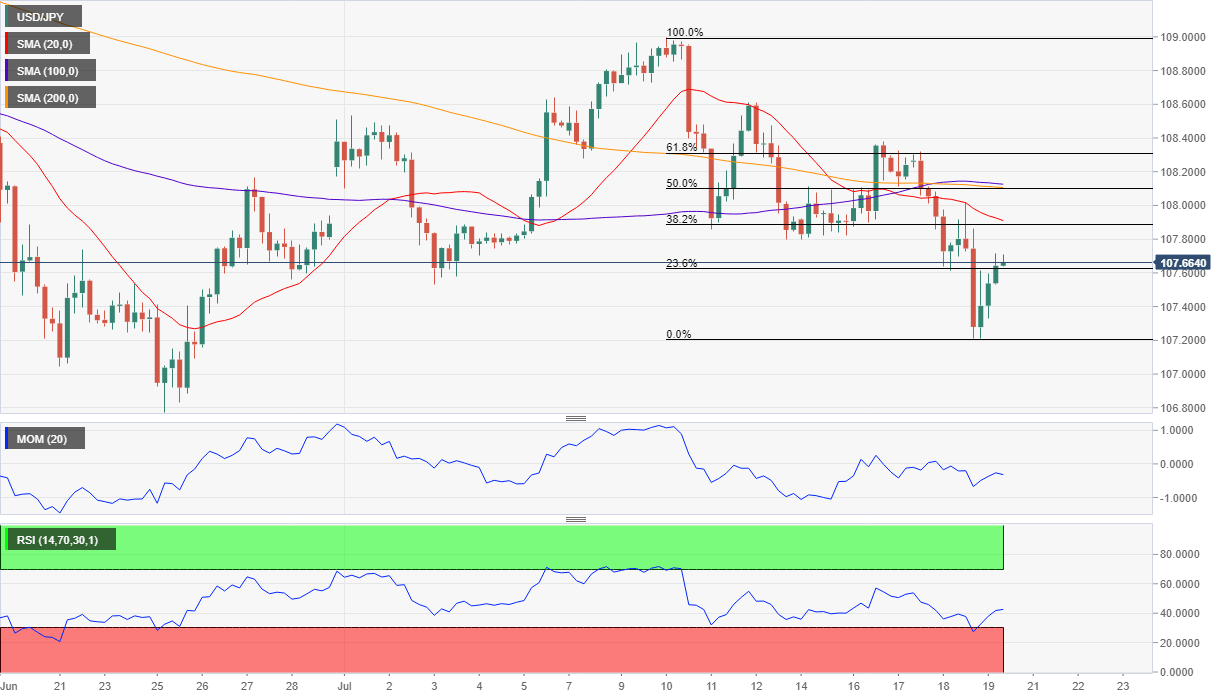 According to the FXStreet Forecast Poll, sentiment around the USD/JPY pair is firmly bearish, as those looking to sell the pair outpace those looking to buy it. Sellers account for 67% of the polled experts for the upcoming week, decreasing to roughly 40% in the following time frames. Bulls, however, represent 32% and 36% respectively in the monthly and quarterly views.

The Overview chart confirms the bearish stance of the pair, as moving averages keep heading south, although, in the longer perspective under study, there’s a wide range of possible targets that suggest uncertainty about the strength of the current downward trend.