The British pound was little changed against the US dollar after the strong UK jobs numbers. The data revealed that the country’s unemployment rate dropped from 5.0% in January to 4.9% in February. This decline was better than the expected increase to 5.1%. It is also better than the US rate of 6.0% and the Eurozone’s 8.6%. The country’s wages without bonus increased from 4.3% to 4.4%, while with bonus it declined from 4.8% to 4.5%. The number of people filing for claims increased by 10,000, an improvement from the previous 86.6k. These numbers have been boosted by the ongoing furlough program.

The euro was calm against the US dollar after the relatively strong German producer price index data. The numbers showed that the PPI increased from 1.9% in February to 3.7% in March. This increase was better than the median estimate of 3.3%. On a month-on-month basis, the index increased from 0.7% to 0.9%. These numbers came a week after Eurostat published the latest consumer price index (CPI) data. They also came a day before the ECB starts its meeting. Economists expect the bank to leave interest rates and quantitative easing policies unchanged.

US index futures declined as US bond yields recovered. The 10-year bond yield rose by 1.14% to 1.617% while the 30-year yield rose by 0.85% to 2.13%. In most periods, stocks tend to have an inverse relationship with the bond yields. The indices also fell as investors wait for key earnings. Some of the firms that are set to publish their results today are Johnson & Johnson, Procter & Gamble, Netflix, Abbott Labs, and Philip Morris. Dow Jones and S&P 500 futures fell by more than 0.30% while the VIX index rose by almost 6%.

The GBP/USD pair is trading at 1.3987, which is slightly below yesterday’s high of 1.400. On the four-hour chart, the pair is forming a bullish consolidation pattern. It is also being supported by the short and longer moving averages. The Relative Strength Index (RSI) has moved above the overbought level of 70. The pair is also above the neckline of the double-bottom at 1.3942. Therefore, there is a possibility that the pair will rise ahead of the latest UK inflation numbers scheduled for tomorrow. 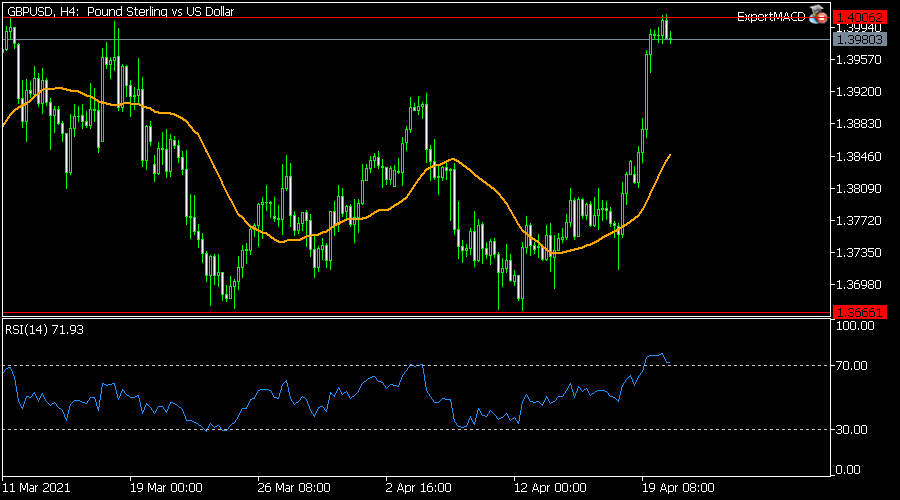 The EUR/USD pair declined slightly as US bond yields rose. It dropped from the intraday high of 1.2080 to the current 1.2055. The price is slightly below the upper line of the ascending channel. It is also slightly above the 38.2% Fibonacci retracement level and the adaptive moving average. The pair’s current price is also above the dots of the Parabolic SAR. Therefore, the pair may retreat slightly and then resume the upward trend. 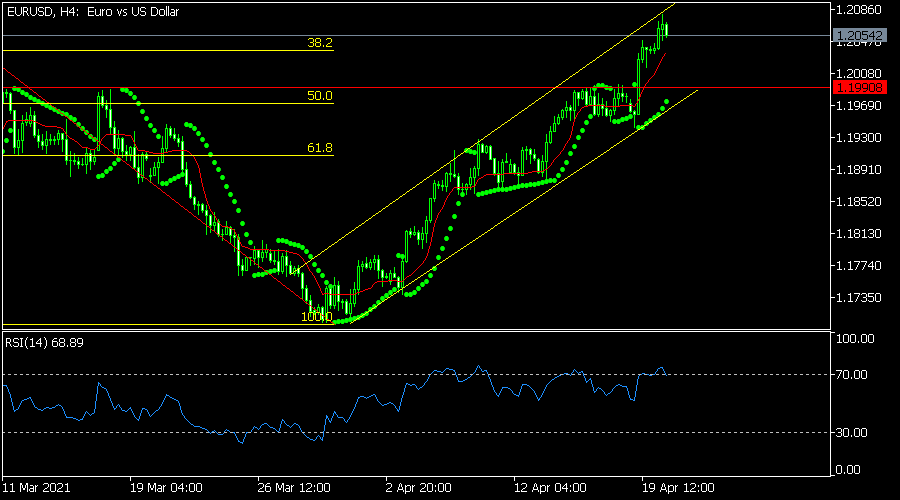 The NZD/USD pair rose to an intraday high of 0.7230, which was the highest level since March 18. On the four-hour chart, the price has moved above the 50% Fibonacci retracement level. The pair is also along the upper line of the Bollinger Bands while the DeMarker indicator has moved to the overbought level. The pair may keep rising ahead of the latest New Zealand inflation data. 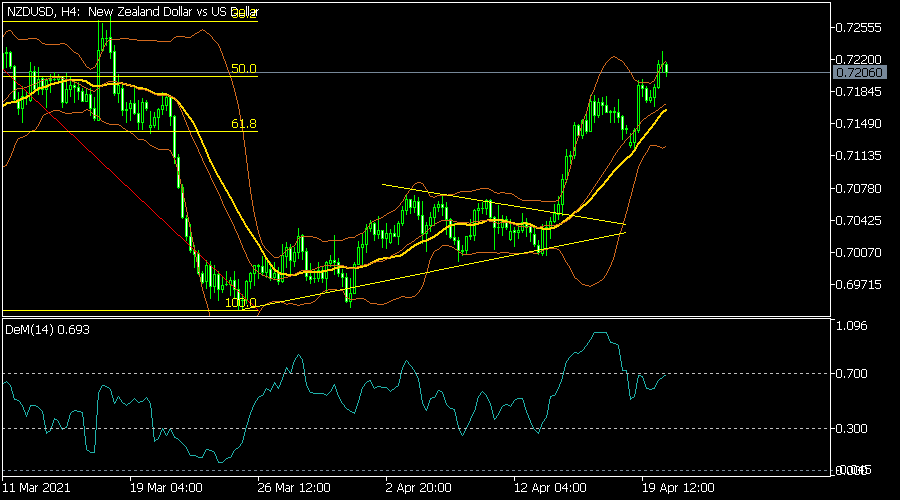