The Australian dollar ended a second consecutive week unchanged against the greenback in the 0.7740 area, after falling to 0.7644, its lowest since mid-April. The pair’s behavior depended on the dollar and speculation related to when and how the US Federal Reserve will tighten its monetary policy.

Growing imbalances between the Fed and the RBA

US data released on Thursday, and an announcement by the US Federal Reserve boosted the dollar, as employment-related numbers were mostly encouraging, while the central bank announced it will unwind one of the programs it established to support the economy throughout the pandemic. Investors rushed to bet on a tighter monetary policy in the US, but such hopes cooled down on Friday, following a soft US monthly Nonfarm Payroll report.

Generally speaking, investors are waiting for the Fed to start trimming quantitative easing to buy the greenback. The market is more willing to buy it than to sell it. But the signs are still unclear and conservative. Inflation is a concern, but employment is not yet.

Meanwhile, Australian inflation failed to impress, as the TD Securities Inflation estimate contracted by 0.2 MoM in May and rose 3.3% YoY. The Reserve Bank of Australia had a monetary policy meeting this past week and was generally dovish. The central bank left interest rates unchanged as expected in its June meeting, also holding the yield on the 3-year Australian Government bond. Policymakers noted that the global economy keeps recovering, although such a recovery remains uneven as some countries have yet to contain the virus. The economic recovery in Australia is stronger than earlier expected, but inflation and wage pressures are subdued, according to the Board.

On a positive note, Australian Q1 Gross Domestic Product beat expectations by rising 1.1% QoQ vs the expected -1%. The different PMIs from Australia indicated that the economy expanded, although some figures missed expectations, reflecting a slower pace of recovery. On the other hand, the official US ISM indexes beat expectations, with the Manufacturing Index jumping to 61.2 and the Services PMI hitting 64 in May, both beating expectations and improving from April’s figures.

On Monday, China will publish its May’s Trade Balance, expected to show a surplus of $330.98 billion, while Australia will release the AIG Performance of Services Index for the same month. The country will publish some key readings, including May’s NAB Business Confidence, June’s Westpac Consumer Confidence, and Consumer Inflation Expectations for the same month. Among other things, the US macroeconomic calendar will include May’s inflation figures and the preliminary estimate of the June Michigan Consumer Sentiment Index, foreseen at 84 from 82.9 previously.

The AUD/USD pair is neutral in its weekly chart, still stuck around a flat 20 SMA. The longer ones remain directionless far below it, while technical indicators lack directional strength, seesawing around their midlines.

The daily chart shows that the pair is struggling to surpass a congestion of moving averages and battling the daily descendant trend line coming from May’s high. Technical indicators have recovered within negative levels, heading north but still incapable to run into positive ground.

The first support level is the weekly low at 0.7644 area, with a break below it, exposing this year’s low at 0.7531. A decline below the latter seems unlikely for the time being. A relevant resistance is the 0.7770/80 area, followed by 0.7820. Gains beyond the latter are unlikely, but a clear bullish breakout exposes the 0.7900 figure. 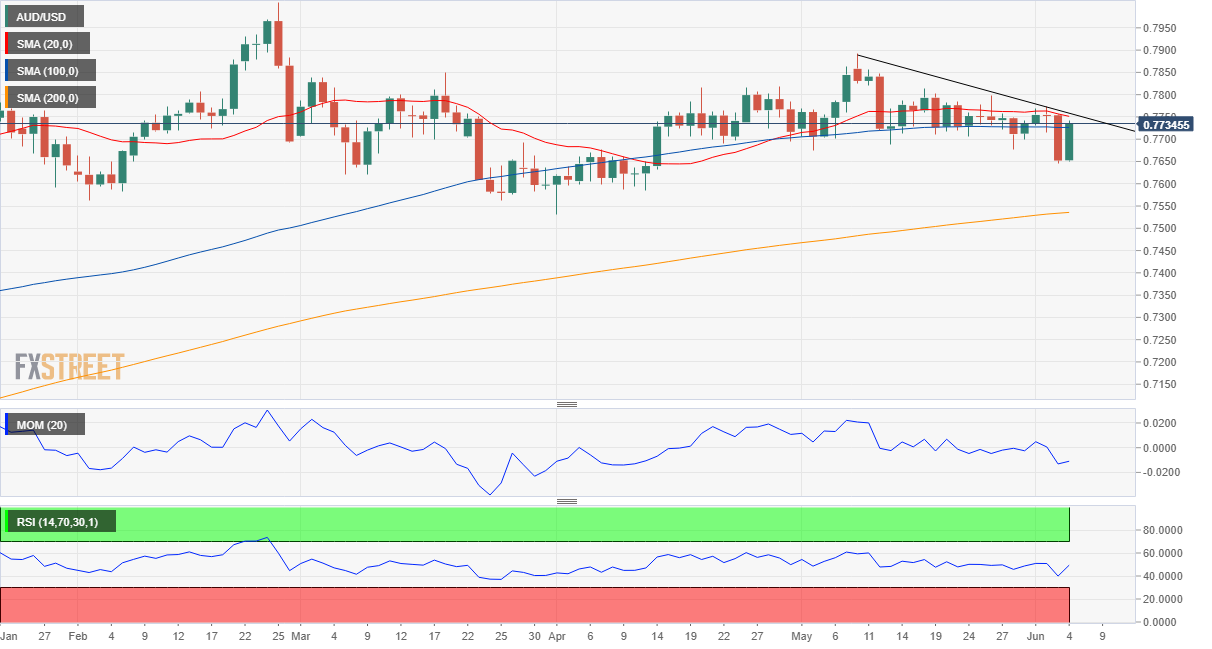 According to the FXStreet Forecast Poll, AUD/USD is set to fall in the near-term but the pair is expected to keep consolidating. Bulls are more courageous in the longer term, for the quarterly perspective, as the pair is seen on average at 0.7794 with bulls accounting for 45% of the polled experts.

The Overview chart shows that most targets are around or above the current level. Some strong bear beats are not enough to turn moving averages lower, as all of them are heading north, although with uneven strength.

GBP/USD Weekly Forecast: How low can it go? US inflation and UK virus data hold the key