The AUD/USD pair changes hands at around 0.7690, mute for a third consecutive week. The pair has been ranging since mid-April, bottoming at 0.7645 on June 4 and topping at 0.7890 on May 10. Beyond the hiccups caused by the Nonfarm Payroll report on Friday and the following reversal on Monday, the pair has remained lifeless.

Somehow, AUD/USD replicates the behaviour of Wall Street, which consolidates near record highs but is unable to enter into a directional trend, both indicating that financial markets are all about sentiment.

Global growth´s signs indicate that the world has begun turning the corner on the pandemic setback. The process toward normalcy is underway mainly in the developed world. However, it will take at least another semester until the world leaves the worst of covid behind. Financial markets are in wait-and-see mode, optimistic but cautious.

So far, risk appetite has offset demand for the American dollar, despite the US economy is among those improving the most. Australia is not far behind, as the Q1 Gross Domestic Product was up 1.8%, officially above pre-pandemic levels. The imbalance between the two economies comes from inflation. In Australia, the Consumer Price Index rose 1.1% in the first quarter of the year, from 0.9% in the previous one, way below the Reserve Bank of Australia desired 2-3%.  In the US, inflation skyrocketed to 5% YoY in May, although there is a general sense that such a jump is temporal, in line with what Federal Reserve officials have said in the last couple of months.

However, inflationary pressures, employment recovery, and how they could affect central banks’ decision is the main theme. The RBA will update policy guidance at the 6 July Board meeting, while the Federal Reserve is set to meet in the next week.

Australian macroeconomic figures were mixed. The AIG Performance of Services Index printed at 61.2 in May, while NAB’s Business Conditions improved to 37 in the same month from 32 in April. Also, June Consumer Inflation Expectations soared to 4.4% from 3.5%, while New Home Sales were up 15.2% in May. On a down note, Westpac Consumer Confidence contracted further in June, printing at -5.2%, while NAB’s Business Confidence resulted in 20 in May, down from 23 in the previous month.

China published multiple figures, most of them missing the market’s expectations. The trade balance posted a surplus of $45.54 billion in May, while inflation shrank 0.2% MoM in May.

The US published the April Goods Trade Balance, which posted a deficit of $68.9 billion, better than anticipated. Initial Jobless Claims for the week ended June 4 came in at 376K, improving from the previous 428K but above expectations. The country also released the preliminary estimate of the June Michigan Consumer Sentiment Index, which improved by more than anticipated, hitting 86.4.

The upcoming week will stage a US Federal Reserve monetary policy meeting on Wednesday. The central bank is widely anticipated to maintain its current policy unchanged, despite the sharp rise in consumer prices. Fed officers have repeated ad exhaustion that heating inflation would likely be transitory amid resurgent demand and supply chain lags. Things may change if inflation remains overheated for a couple more months.  The US will also publish May Retail Sales.

The Reserve Bank of Australia will publish the Minutes of its latest meeting on Tuesday and the May Westpac Leading Index on Wednesday. Later into the week, the country will unveil May employment figures.

The AUD/USD pair is still neutral in its weekly chart, seesawing around a directionless 20 SMA while above the longer ones, which also stand aimless. The Momentum indicator heads nowhere around its midline, while the RSI grinds lower, currently at 54.

The daily chart shows that price is retreating from converging 20 and 100 SMAs. Technical indicators have turned south from around their midlines, heading lower below them, although without enough momentum to suggest another leg lower. 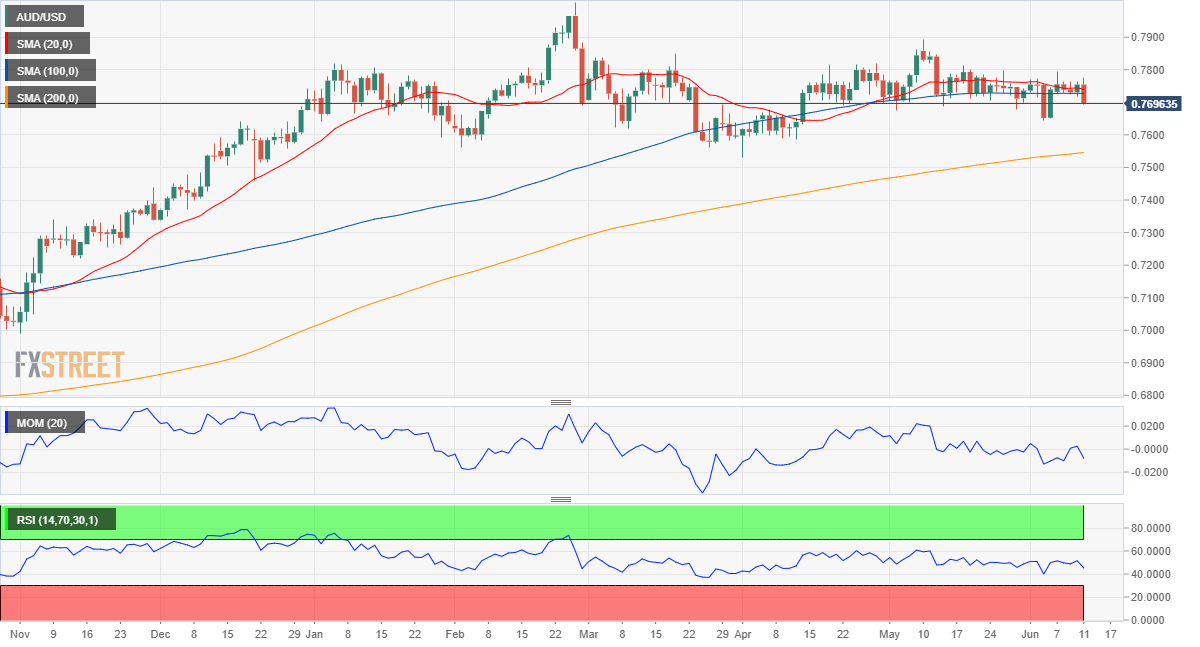 According to the FXStreet Forecast Poll, AUD/USD is seen holding above the 0.7700 level on average. Those betting for higher targets account for over 55% of the polled experts in the three time-frame under study. Bulls are the most in the quarterly perspective.

In the Overview chart, the pair is neutral in the weekly outlook, with the moving average flat. The monthly one heads north, while the quarterly one lacks directional strength. However, there is a clear accumulation of possible targets around 0.8000 with some fresh bears beating for lower lows in the 0.7200 price zone.