The AUD/USD pair is ending the week at around 0.7600, marginally lower for the week. The pair posted a fresh 2021 low at 0.7531, recovering ahead of the weekly close on easing demand for the greenback.  Sentiment continues to lead the way, mainly centred on a US economic comeback, moreover after US President Joe Biden finally unveiled his investment proposal.

The long wait for an economic comeback

The American currency gave up alongside local government bond yields, after peaking at over one-year highs ahead of US President Joe Biden’s announcement on a $2.3 trillion investment program, aimed to tackle the effects of the pandemic on economic growth, focused on infrastructure and climate change. His proposal includes corporate tax hikes, a point that has already faced fierce opposition. The plan is the first part of a likely $ 4 trillion program.  On taxes, he clarified that they wouldn’t hit anyone making below $400K a year.

Hopes that the US will stage a sooner-than-expected comeback have been backing the American dollar, but for sure, it has a limited impact when measured against its Australian rival, as the Asian country is also baring well with the ongoing pandemic. However, the greenback pulls more at the time being, resulting in a mildly bearish AUD/USD.

Australian data was mixed, as the March AIG Performance of Manufacturing Index printed at 59.9, while the Commonwealth Bank Manufacturing PMI resulted in 56.8. However, the country’s Trade Balance posted a surplus of 7529 million in February, missing expectations, while Retail Sales in the same month were confirmed at -0.8%, slightly better than initially anticipated.

US data was mostly upbeat, as CB Consumer Confidence improved to 109.7 in March, its highest in over a year, while the official ISM Manufacturing PMI printed at 64.7, expanding in March at the fastest pace since 1983. On Friday, the country reported March employment figures, which were much better than anticipated. The country added 916K new jobs in March, while the unemployment rate contracted to 6% as expected, despite the participation rate increased to 61.5% from 61.4%. Stocks futures soared with the news, and US Treasury yields ticked higher, providing support to the greenback.

Australia will publish next week the March AIG Performance of Construction Index and TD Securities Inflation for the same month. On Tuesday, the Reserve Bank of Australia will have a monetary policy meeting, while by the end of the week, the central bank will release the Financial Stability Review report.

The upcoming week will bring the Markit Services PMI and the official US ISM Services PMI, the latter foreseen at 57.4 from 55.3 in February. On Wednesday, the US Federal Reserve will release the Minutes of its latest meeting.

The AUD/USD pair is about to break the neckline of a H&S formation, which may result in a roughly 450 pips decline. Such a neckline stands at around 0.7560. The weekly chart shows that the pair is finishing the week below a still bullish 20 SMA, while the longer ones remain directionless, far below the current level. Technical indicators have retreated towards their midlines, with the Momentum struggling around its midline and the RSI heading south at around 53.

The first support level is 0.7563, where the pair bottomed in February, although the year low has been set this week at 0.7531, the level to break to confirm further slides ahead. Resistances are located at 0.7620, 0.7700 and 0.7770. Only above the latter, the pair can recover its bullish potential, quite an unlike scenario. 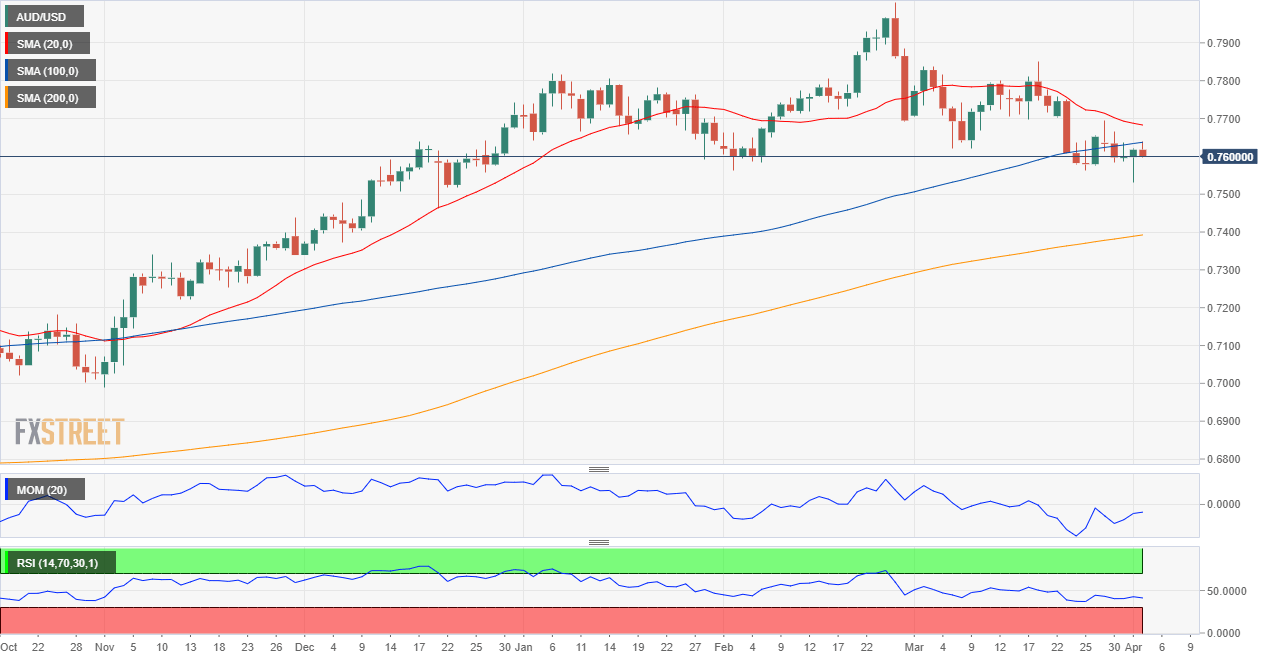 According to the FXStreet Forecast Poll, the AUD/USD pair won’t break lower. It’s seen declining near term, but on average, it should hold above the 0.7500 threshold. The pair is expected to resume its advance afterwards, bullish according to the monthly and quarterly perspectives. However, AUD/USD is expected to remain well below the year high at 0.8006.

The Overview chart offers a neutral stance, as the possible targets’ range is quite limited in all the time-frame under study. Most targets accumulate just above the current level in the monthly and quarterly views, but below the mentioned high.

EUR/USD Weekly Forecast: Bears are not done yet