EUR/USD downtrend extended to a fresh 2021 low of 1.1703 this week, although the pair managed to trim most of its weekly losses ahead of the close. The dollar peaked on Wednesday, as US Treasury yields reached late on Tuesday a fresh over one-year highs, with the yield on the 10-year Treasury note hitting 1.77%. The greenback’s strength faded afterwards, as the same yield retreated to 1.67% ahead of the close.

Optimism prevailed ahead of US President Joe Biden’s investment plan. The “once-in-a-generation” investment program implies a $ 2.3 trillion mostly focused on infrastructure and climate change.  The amount could be expanded to up to $ 4 trillion and includes corporate tax hikes, although he detailed it would not hit anyone making less than 400K per year. Biden’s ambitious program needs to pass Congress, already facing fierce opposition from Republicans, who oppose tax hikes as part of the process.

Hopes for a US economic rebound had pushed global yields higher, amid expectations inflation will start picking up. The European Central Bank President, Christine Lagarde, said that the market “can test us as much as they want,” adding that European policymakers will continue to use exceptional tools to deliver their mandate. The central bank accelerated its bond-buying program in its latest meeting to limit the impact of rising borrowing costs that could undermine the Union’s recovery.

Investors are correct in one thing. The US has better chances for a sooner recovery. Within the pandemic, lockdowns had been localized and limited in the country, while at least 30% of the populations has received at least one shot of a coronavirus vaccine. Opposite to Europe, where vaccines distribution remains sluggish, while long periods of restrictive measures were applied in most countries.

About betting on higher inflation, that seems too hasty. US core PCE inflation stands at 1.4% YoY, down from 1.9% a year earlier and far below the long-term average of 3.2%. Higher yields reflect hopes, not actual inflationary pressures. Speculative interest may receive a reality check in the upcoming months.

Data released these days was mixed. German March inflation printed at 1.7% YoY, according to preliminary estimates, while Retail Sales in the country plummeted 9% YoY in February. The March EU Economic Sentiment Indicator improved from 83.4 to 101, beating expectations, but annual inflation held steady at 1.3% in March. Markit upwardly revised its March Manufacturing PMIs for the EU, but the positive impact was limited, as the focus remains in the service sector, the most hit by lockdowns.

In the US, there were a couple of encouraging surprises. CB Consumer Confidence improved to 109.7 in March, its highest in over a year, while the official ISM Manufacturing PMI printed at 64.7, expanding in March at the fastest pace since 1983. On Friday, the country reported March employment figures, which were much better than anticipated. The country added 916K new jobs in March, while the unemployment rate contracted to 6% as expected, despite the participation rate increased to 61.5% from 61.4%. Stocks futures soared with the news, and US Treasury yields ticked higher, providing support to the greenback.

The upcoming week will bring the Markit Services PMI and the official US ISM Services PMI, the latter foreseen at 57.4 from 55.3 in February. On Wednesday, the US Federal Reserve will release the Minutes of its latest meeting, while the European Central Bank will publish its own document on Thursday.

The EUR/USD pair trades around 1.1760, and further long-term declines could be expected according to long-term technical readings. In the weekly chart,  the pair keeps sliding below its 20 SMA, which has now turned flat. The price remains some 400 pips above a mildly bullish 200 SMA, but technical indicators hold near their multi-month lows, with the RSI maintaining its bearish momentum at around 42.

According to the daily chart, EUR/USD is poised to extend its decline. The 20 SMA is crossing below the 200 SMA, while already below the 100 SMA, all of them far above the current level. Technical indicators managed to correct oversold conditions reached this week, but have lost directional momentum well into negative territory. 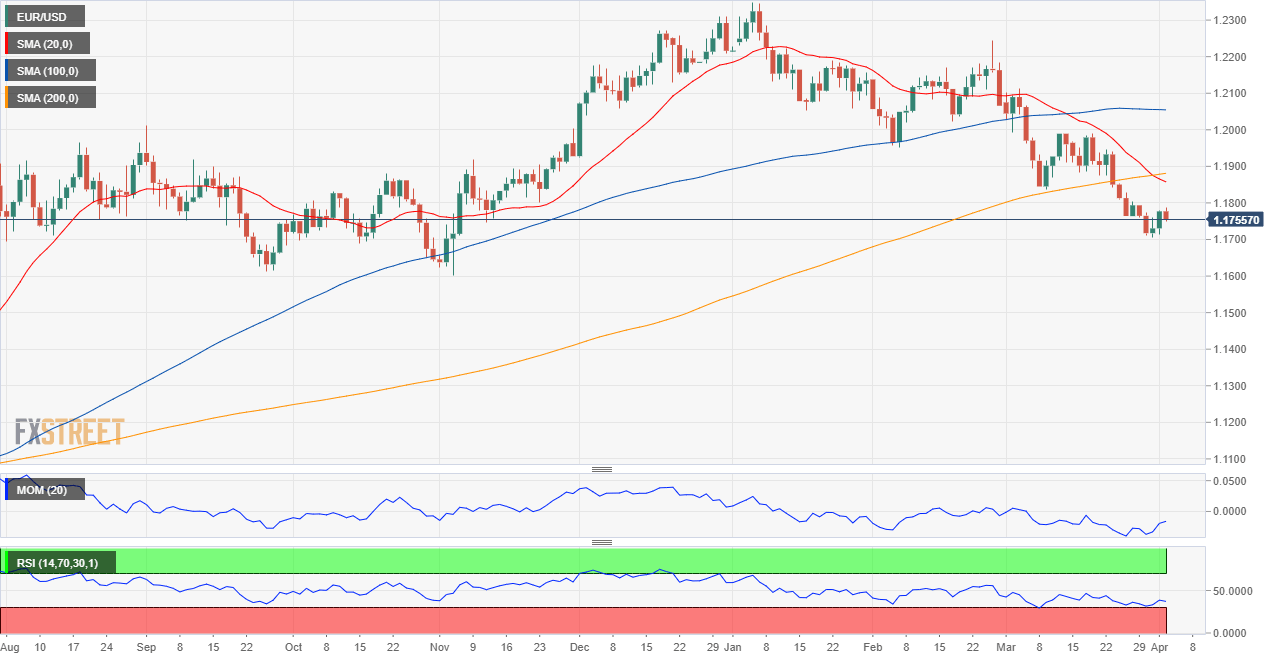 However, moving averages in the Overview chart maintain their bullish slopes. The weekly MA heads firmly lower, as well as the monthly one. The longer-term one has a modest bearish slope but still heads south.

On a weekly basis, possible targets are confined to a tight range between 1.16 and 1.18, but the range widens as time goes by, somehow indicating increased uncertainty over the longer-term price action. In the three-month view, the pair is seen as low as 1.1200 and as high as 1.2550.