The AUD/USD pair hit 0.7242 this week, its highest since February 2019, trimming most gains ahead of the close but still holding in the green weekly basis. The pair rallied on the persistent sell-off of the American currency, and soaring gold prices, which underpinned the Aussie.

Focus on US turmoil

Speculative interest saw no reason to buy the greenback, amid US turmoil in different fronts. Not only data continues to suggest that the economy keeps contracting, but also political tensions escalate, within and abroad. The US Congress has been unable to agree on a new aid package, while US President Trump renewed his attacks on China, issuing an order banning TikTok and WeChat from operating in the US in 45 days if they are not sold by parent Chinese companies.

By the end of the week, news suggested that the US administration is considering expanding its actions against China, potentially sanctioning 11 individuals, including Hong Kong leader Carrie Lam. The headline gave a temporal boost to the greenback, but nothing that could change its dominant bearish stance.

Despite the pandemic hasn’t ignored Australia, the situation in the country is much better than abroad. The country has been reporting an average of 350 new cases during the last couple of weeks, with the Victoria area still in lockdown. The country has reported a total of roughly 20,000 cases since March, and the death toll reached 266.

Macroeconomic data coming from Australia these days, reflect the better shape of the local economy, despite the fact that it’s far from optimal. Nevertheless, the economic machine continues working in the country. Manufacturing output and services activity remained in expansion territory throughout July, according to the latest numbers, while Retail Sales surged 2.7% in June. In this last month, the Trade Balance posted a surplus of 8202 million, improving from the previous monthly figure, although below expected.

China data also indicated economic growth, as the Caixin Services PMI printed at 541 in July, while the Trade Balance for the same month posted a larger-than-anticipated surplus of $63.33B. As long as the Chinese economy expands, Australia will continue to have a place to allocate its production.

The week ahead will bring Chinese inflation data on Monday, although the key day will be Friday when the Asian giant will publish July Industrial Production and Retail Sales. Australia will unveil some confidence indicators, although attention will be on the employment sector, as the country will publish quarterly wages on Wednesday and the monthly employment report on Thursday.

The AUD/USD pair is trading around 0.7170 as the week comes to an end, and the weekly chart shows that it maintains its bullish bias after nearing a critical threshold, the 200 SMA. In the mentioned time-frame, the pair has steadily advanced above its 100 SMA, while the 20 SMA gains bullish traction below it. Technical indicators are stable near overbought readings, with no signs of upward exhaustion.

Daily basis, the risk of a steeper decline seems limited, as the pair remains above a bullish 20 DMA, while the 100 DMA is about to cross above the 200 DMA, both far below the current level. Technical indicators have turned lower within positive levels, rather following the price than anticipating an upcoming decline. 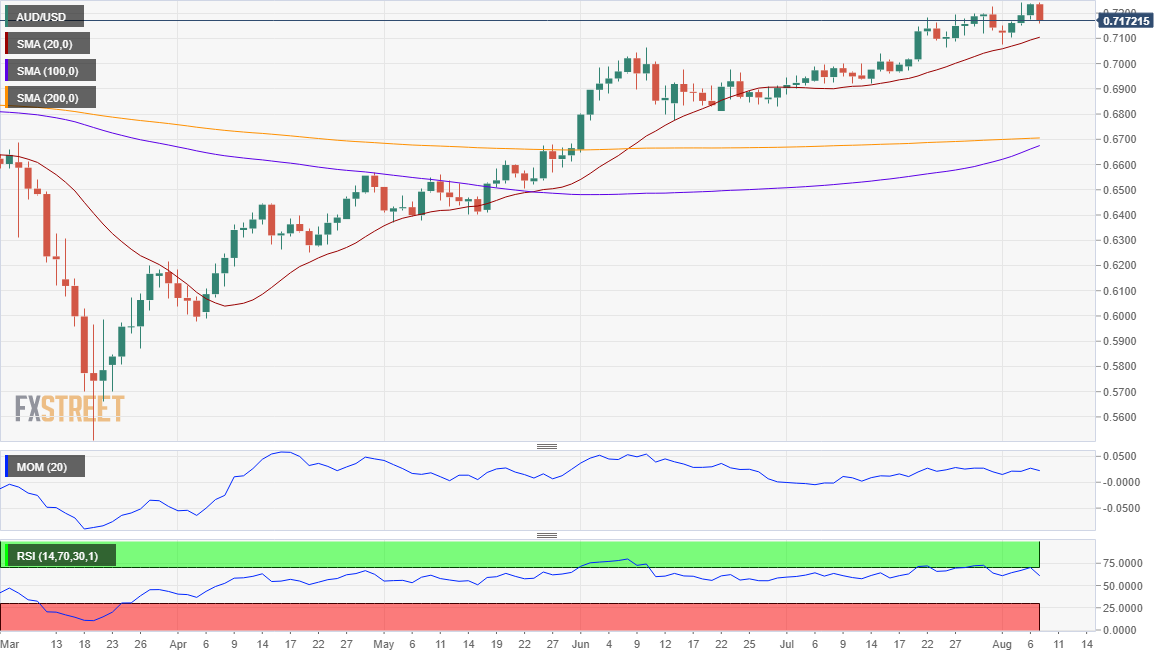 The FXStreet Forecast Poll indicates that speculative interest is suspecting an interim top in the pair, as it is seen neutral in the shorter view, and bearish in the next weeks. Still, the average target in the three time-frame under study remains above the critical 0.70 threshold. At this point, the market sees no reason to return to the greenback, rather foreseeing some stability around the pair.

The Overview chart shows that while moving averages have decelerated, they still maintain their bullish slopes, a sign that bulls may have paused, but didn’t give up yet.