The broad dollar’s weakness fell short of helping AUD/USD. The pair ended the week pretty much unchanged, trading below the 0.7400 level. The Australian could not advance with the usual catalysts but retreated rapidly with those that weigh on the aussie, reflecting the absence of interest for the commodity-linked currency.

The main reason is still linked to the pandemic. Australia passed 2020 without much economic pain, as the island country quickly closed its borders. However, such a strategy could not be applied eternally, and the country opened borders with neighbour New Zealand after a year. The virus entered the country, and since early June, multiple regional lockdowns have been in place, although the coronavirus keeps spreading.

The number of daily cases is above 200, quite low compared to other major economies, but the Australian government did not act in a timely manner on immunization. Only 14.5% of the population is fully vaccinated, while only 17.7% has received just one shot. Lockdowns have been extended, and the economy keeps feeling the pain. The Reserve Bank of Australia has adopted a cautious stance that will likely be maintained in the next months.

Disappointing Fed and US data

The US Federal Reserve met on Wednesday, and its announcement was disappointing, the only factor that prevented AUD/USD from falling further. The US central bank has left its monetary policy unchanged as widely anticipated. At the same time, policymakers agreed to maintain the current financial support, while Chairman Jerome Powell dodged questions related to the timing of tapering.  “We are not there yet,” said Chairman Jerome Powell in the Q&A that followed his speech. Market participants were hoping for some clues on how and when the US central bank will start to reduce its bond-buying programs launched to support the economy through the pandemic.

The US published the preliminary estimate of the second quarter´s Gross Domestic Product, which showed that the economy grew at an annualized pace of 6.5%, below the expected 8.5%. Q1 GDP was downwardly revised to 6.3%.  Durable Goods Orders were up a modest 0.8% in June vs the 2.1% expected, while the core reading came in at 0.3%. Initial Jobless Claims for the week ended July 23 printed at 400K, while the previous weekly figure was upwardly revised to 424K.

The Australian macroeconomic calendar included the Q2 Consumer Price Index, which improved from 1.1% to 3.8% YoY. The RBA Trimmed Mean CPI in the same period came in at 1.6% as expected. In the same quarter, the Export Price Index surged 13.2%, while the Import Price Index rose 1.9%.

Focus shifts to US employment

In the upcoming days, the US will publish on Wednesday the ADP survey on private jobs creation, foreseen at 600K. On Thursday, the country will release weekly Initial Jobless Claims and Challenger Job Cuts ahead of the Nonfarm Payroll report, out on Friday. At the time being, analysts foresee that 926K new jobs were added in July. The monthly employment report could be a game-changer if the number surpasses the 1 million threshold. Additionally, the country will publish the official July ISM indexes on manufacturing and services output, while Markit will release the final versions of its July PMIs.

Australia will kick-start the week publishing July manufacturing PMIs and July TD Securities inflation. On Tuesday, the Reserve Bank of Australia will announce its decision on monetary policy, yet as said, no changes to the dovish stance are expected. Through the week, the country will release June Retail Sales and Trade Balance figures.

The AUD/USD pair is bearish, according to the weekly chart. It keeps developing well below a mildly bearish 20 SMA while approaching directionless 100 and 200 SMAs. In the meantime, technical indicators hold within negative levels, lacking directional strength.

The risk is skewed to the downside also in the daily chart, as advances attracted sellers around a firmly bearish 20 SMA, which accelerates lower far below the longer ones. Technical indicators are in retreat mode after a failed attempt to surpass their midlines. 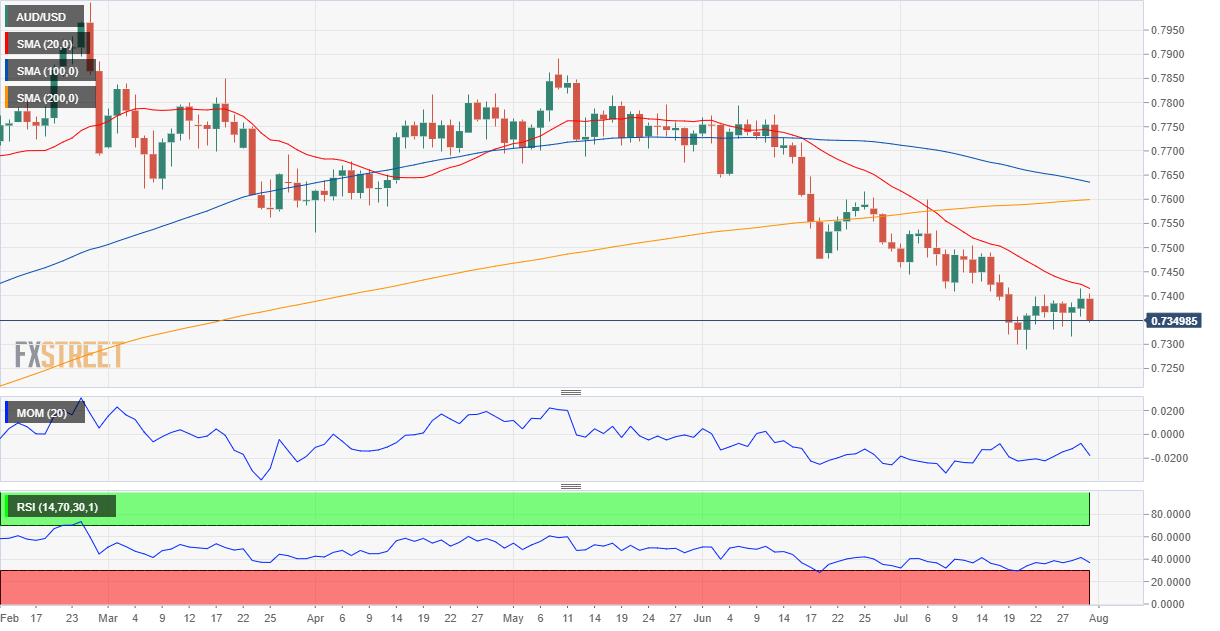 The FXStreet Forecast Poll indicates that market participants are willing to keep selling the pair in the near-term, as 71% of the polled experts bet for a slide, leaving the average price at around 0.7335. However, bulls become an overwhelming majority in the monthly and quarterly perspectives, while the number of those looking for lower lows decreases below 20%.

In the Overview chart, the weekly and monthly moving averages retain their strong bearish momentum, somehow suggesting there’s room on the downside. The quarterly moving average, on the other hand, maintains its neutral stance amid a wide range of possible targets.

EUR/USD Weekly Forecast: Could the Nonfarm Payroll report be a game-changer?

USD/JPY Weekly Forecast: The view ahead is the same as the view behind

GBP/USD Weekly Forecast: Will the Bank of England step out?

EUR/USD struggles to keep the latest rebound from 1.1266 around the support-turned-resistance line during the initial Asian session on Tuesday. The major currency pair stays inside a nearby descending trend channel formation around 1.1285.

GBP/USD treads water around 1.3255-60 during the early Asian session on Tuesday, following a positive daily performance. The cable pair fades the recovery strength as sluggish market sentiment and a lack of major catalysts challenge the buyers’ previous optimism surrounding Brexit and the Bank of England’s (BOE) next move.

Gold was consolidated on Monday and ended slightly lower. The price in Asia is perking up by 0.16% on the day so far and straddles the $1,780 mark between a low of $1,778.59 and $1,782.04. The easing concerns of the potential economic impact of Omicron did little to support gold.

Solana price to drop another 50% as SOL looks for support