The AUD/USD pair fell for a third consecutive week, trading near a fresh 2021 low of 0.7398. Things in Australia have continued to worsen on the COVID-19 front, affecting economic developments and weighing on the aussie.  The country has extended some of the regional lockdowns imposed in June, as the number of coronavirus cases remains on the rise. Sydney, Victoria, South Wells and Queensland are among the cities suffering from restrictions.

The closures effects on the economy were reflected in the Australian macroeconomic figures released this past week. June NAB’s Business Confidence contracted from 20 in the previous month to 11, while NAB’s Business conditions fell from 36 to 24. Consumer Inflation Expectations in the same month resulted at 3.7%, down from 4.4%. Finally, the country added just 29.1K new jobs in June, far below the previous jump of 115.2K.

Meanwhile, demand for the American currency surged on a souring market’s mood. US Federal Reserve Chairman Jerome Powell testified before Congress on monetary policy. In his semi-annual presentation, he reiterated that inflationary pressures are likely to be temporary and pledged to maintain the financial support until the economy fully recovers. Powell also said that they would continue to discuss tapering in the upcoming meetings.

Market players were disappointed with his dovish stance, with the greenback benefiting from its safe-haven conditions and firmer equities. Wall Street rallied on upbeat earnings reports, reaching fresh all-time highs. However, AUD/USD was unable to replicate US indexes gains.

Chinese data was mixed, as there were some good news. Retail Sales were up 12.1% YoY, while Industrial Production increased 8.3% YoY in June. The country’s Trade Balance posted a surplus of $51.5 billion in the same month, beating expectations.

Data-wise, US figures were also mixed. Inflation was upwardly revised for June, reaching a whopping 5.4% YoY. The core Consumer Price Index was upwardly revised to 4.5%, while the Producer Price Index in the same period hit 7.3%. Initial Jobless Claims for the week ended July 9 contracted to 360K, while Industrial Production rose a modest 0.4% MoM in June. Capacity Utilization in the same month rose by less than anticipated, reaching 75.4%.

On Friday, the country published June Retail Sales, which came in at 1.3% MoM, much better than the -0.4% expected. The preliminary estimate of the July Michigan Consumer Sentiment Index missed the market’s expectations, contracting from 85.5 to 80.8, and well below the expected 86.5.

Next week’s Australian macroeconomic calendar will include next week the RBA Minutes of its latest meeting and the preliminary estimate of June Retail Sales, expected to have fallen by 0.5%. The country will also release the June Westpac Leading Index and quarterly NAB’s Business Confidence.

The American calendar will be light through the week without any first-tier figures. The focus will be on the usual weekly unemployment claims. On Friday, attention will be on the preliminary estimates of the July Services and Manufacturing PMIs for both countries.

Technically speaking, the bearish case for AUD/USD remains firmly in place. The weekly chart shows that the pair is pressuring 2021 low while developing well below a bearish 20 SMA. Moreover, the longer moving averages remain directionless below the current level, while technical indicators maintain their bearish slopes within negative levels.

In the daily chart, the bearish potential is even stronger. A bearish 20 SMA capped the upside while accelerating south below the longer ones. Technical indicators remain near weekly lows with uneven strength, anyway skewing the risk to the downside. 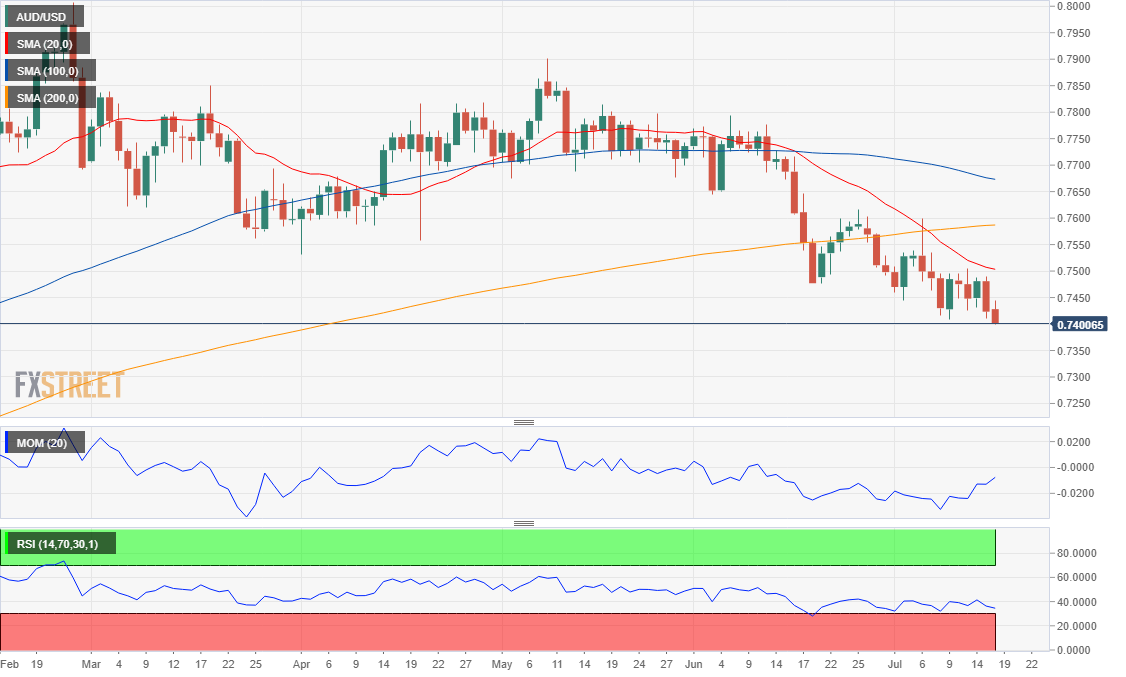 The FXStreet Forecast Poll indicates that the pair will likely remain on the back foot next week, as most polled experts are beating for a decline, with the pair seen on average at 0.7373. The pair is expected to recover afterwards, as bulls are over 75% in the monthly and quarterly views, with the pair seen at 0.7578 and 0.7603 respectively.

The Overview chart, however, indicates persistent selling interest. The moving averages are bearish in the three time-frame under study. Some bullish targets near 0.8000 in the monthly and quarterly views lift the average, although the chart shows that most possible targets accumulate around or below 0.7600. A long-term break below the 0.7000 level is appearing for the first time in over a year.

EUR/USD Weekly Forecast: Eyes on the ECB and fresh clues on monetary policy