Is inflation transitory or not? There is no doubt that prices are rising fast, but the interpretation of the data by the all-powerful Fed is no less important. Rising Delta COVID-19 cases on both sides of the pond are set to gain more importance and so are US infrastructure talks.

This week in GBP/USD: Rising inflation, no alarm bells

US inflation is undoubtedly on the rise – the headline Consumer Price Index hit 5.4% YoY in June, and Core CPI reached 4.5%, both smashing estimates. However, the main drivers remained reopening-related – prices of used vehicles, car rentals, airfares and apparel. Spending a night at a hotel is also costly.

Will faster price rises prove transitory or stick around, turning into higher inflation expectations? Investors initially went for the latter, assessing ongoing pressures and buying the dollar. However, the ultimate judge was Jerome Powell, Chair of the Federal Reserve.

The world's most powerful central banker stated that while inflation is set to remain high for several months, it is transitory and should ease. Moreover, he said the economy is still "a ways off" from making "substantial further progress" – the Fed's vague term for determining when to taper its bond-buying scheme.

Assessing that the Fed continues creating $120 billion per month, the greenback lost ground.

While Powell spoke in one room on Capitol Hill, Democrats used another corner of the building to present a $3.5 trillion infrastructure package. At the time of writing, it remains unclear if Senator Joe Manchin  (D-WV)  – the pivotal conservative Democrat – supports it. Markets seem to reserve judgment for now.

In the UK, Prime Minister Boris Johnson insisted that the July 19 reopening would go through, despite the rapid spread of the Delta variant. Fears about increasing deaths and hospitalizations also weighed on the pound. 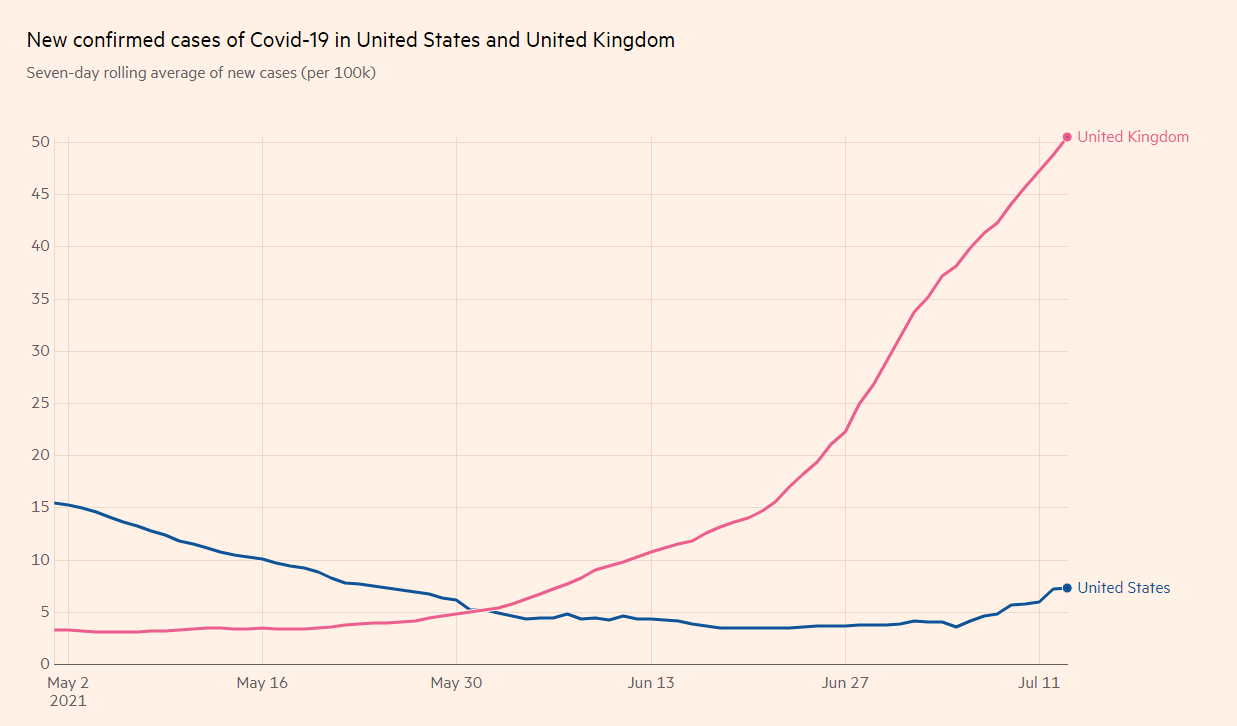 The virus is spreading in the US, which has seen a doubling in infections – albeit from a low base and concentrated in places where vaccination rates are low. So far, this worrying development has yet to impact markets.

Circling back to the data, UK inflation is also rearing its ugly head – 2.5% YoY in June, higher than expected. Moreover, wage growth accelerated to 7.3% yearly in May, a potential precursor to an increase in spending. Britain's jobless rate edged up to 4.8%.

Yet similar to the US, what matters is what central banks say they will do about rising prices – not anybody else's interpretation. Bank of England Governor Andrew Bailey stated that he would not be forced to raise rates in response to transitory inflation, pushing sterling down.

On the other hand, his BOE colleague Michael Saunders presented a hawkish view – urging an end to bond-buying and an eventual hike to borrowing costs. Saunders' words only had a short-lived upside effect on the pound.

Freedom Day is here – almost all covid regulations will be thrown to the bonfire on July 19, causing concerns that the current Delta spread could worsen. Criticism about the government's decisions – such as the confusion about wearing face masks in public transport – could raise the chances that restrictions return.

Daily coronavirus infections, admissions to hospitals and mortalities could impact sterling more than beforehand. If health services come under pressure, the PM could make another U-turn. On the other hand, if vaccinations are at sufficient levels to turn the tide, sterling could shine.

Over half the British population is fully vaccinated, and nearly 70% have received at least one dose. However, reaching the last adults is proving a harder task, as the drop in daily jabbing shows. Investors would prefer seeing the chart turn upward. 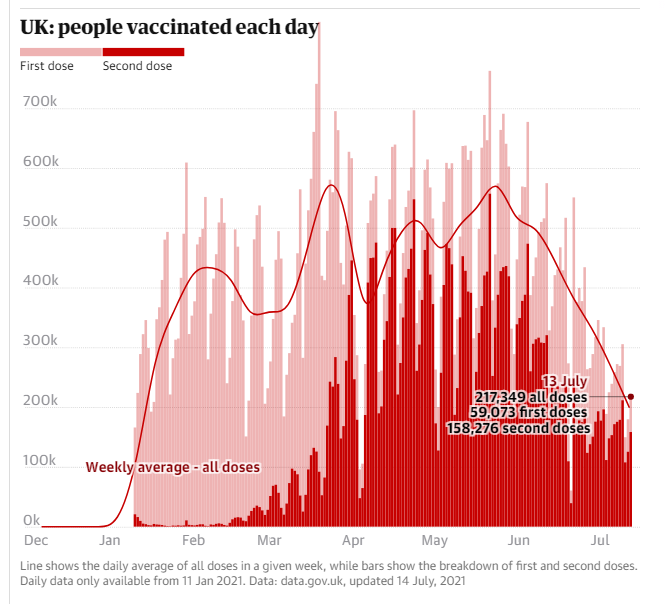 Retail sales statistics for June are of interest, and they could benefit from a "football-boost" – increased consumption due to the Euro 2021 games. Yearly increases are set to remain high due to a downfall in spending this time last year.

Markit's preliminary Purchasing Managers' Indexes for July will likely show a decline in business sentiment after hitting elevated levels in June. Any score above 50 represents expansion, and the 62.4 level reported for the services sector is especially high. Holding above 60 should support sterling.

US events: Delta in and infrastructure eyed

Will the Delta strain derail America's recovery? With nearly half of the population fully protected and some 56% having received at least one shot, many vulnerable areas of the country could struggle. The increase in infections has already pushed hospitalizations higher.

More shots need to get in arms to maintain the rapid recovery, and the overall figures above mask a sharp divide between states. In Vermont, 75% of the population received one shot, while the rate is only 38% – roughly half – in Mississippi.

Without an increase in this chart, there could be more damage that would support the safe-haven dollar. 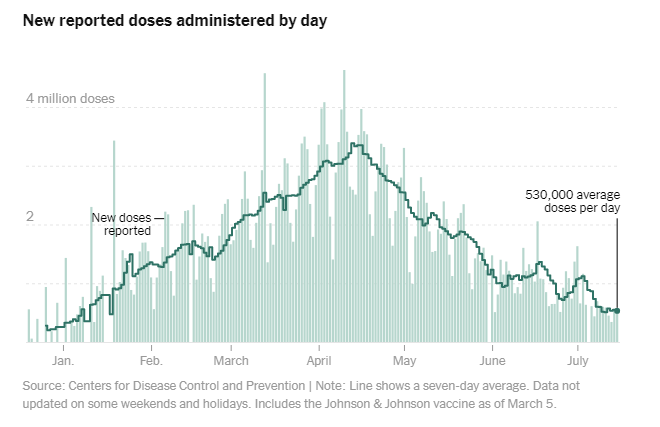 Senate Majority Leader Chuck Schumer circled July 21 as the date he wants the infrastructure deal to "move forward." The massive $3.5 trillion package is still awaiting the blessing from Joe Manchin, the most conservative ruling party member. The greenback could rise if the legislation moves forward.

However, there is a good chance that discussions about how to fund this spending cause delays – and changes – to the package. Markets have been shrugging off news from Washington but may tune in if discussions advance.

The economic calendar is lighter than in previous weeks, but there are several noteworthy releases. Housing figures are likely to continue showing a robust construction market in June. Markit's preliminary PMIs for July carry mixed expectations – a surge in activity in the services sector but a decline in manufacturing.

Pound/dollar is trading within a well-defined broad range – capped by the round 1.40 level and supported by the double-bottom 1.3670 line. Where will it go next? Momentum is tentatively turning positive on the daily chart, but cable is still below the 50-day and 100-day Simple Moving Averages, and the 200-day SMA is creeping on it. Overall, the picture is mixed.

The Delta variant may become more influential on both sides of the Atlantic – and that is a lose-lose situation for GBP/USD.

The FXStreet Forecast Poll is showing that experts expect more short-term pain – a close under 1.38 in the upcoming week. However, the tables are set to turn in favor of bulls in the medium and long terms, bringing GBP/USD toward 1.40 once again. Average targets have been downgraded in comparison to the previous week. 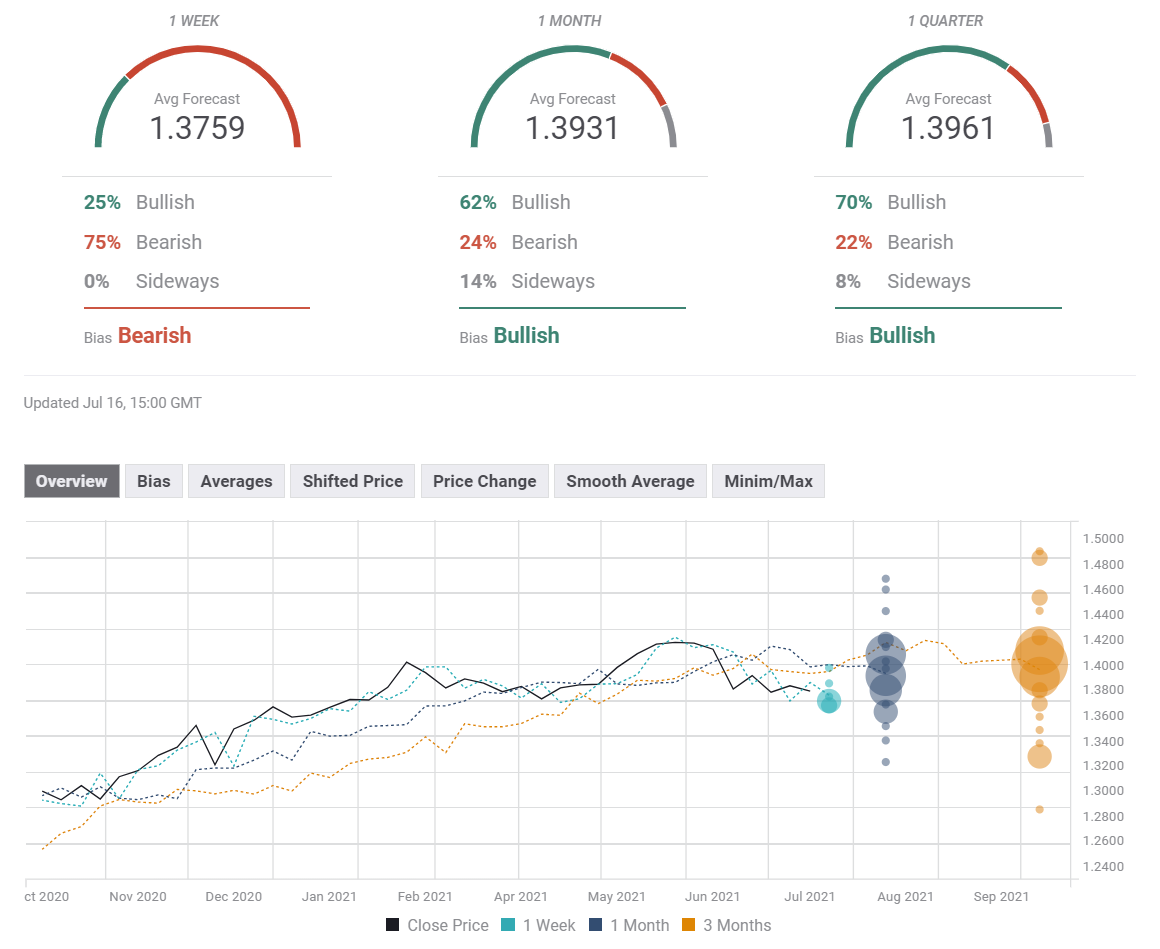