The American dollar edged higher in the second week of July, with EUR/USD settling at around 1.1800 after bottoming at 1.1771. Financial markets kept taking hints from central banks and growth-related figures for direction.

More from Powell and Lagarde

US Federal Reserve Chairman Jerome Powell testified before Congress on monetary policy. In his semi-annual presentation, he reiterated that inflationary pressures are likely to be temporary and pledged to maintain the financial support until the economy fully recovers. Powell also said that they would continue to discuss tapering in the upcoming meetings.

European Central Bank President Christine Lagarde also commented on monetary policy. The ECB has decided to be flexible with inflation, announcing that the 2% target is not a ceiling but rather a level around which inflation could oscillate. Lagarde noted that policymakers would need to redefine their forward guidance to align with the strategy review. The central bank aims to avoid tightening too early.

What’s up with growth?

If looking at equities is a measure of sentiment, then US traders seem more optimistic than their European counterparts. Wall Street extended its run to record highs, with the three major indexes settling at uncharted territory. On the other hand, most European indexes closed in the red. However, there is a trick to stocks´ rally: is earnings season and generally speaking, earnings are stronger than expected, somehow reflecting a solid economic comeback.

However, concerns prevailed about a slowing pace of progress. Neither the EU, nor the US published GDP data, although Chinese figures released mid-week showed that growth decelerated in the second quarter, as the country’s annual Gross Domestic Product fell from 18.3% in Q1 to 7.9%.

Market participants are noting the recovery’s deceleration while spicing it with mounting concerns about the spread of the coronavirus Delta variant, now the dominant one in the Northern Hemisphere.  Europe and the US are taking some measures in an attempt to contain it, although it’s yet to be seen if vaccines are enough to prevent concerning levels of severe cases and deaths.

Inflation soars in the US

On the data front, US figures were mixed. Inflation was upwardly revised for June, reaching a whopping 5.4% YoY. The core Consumer Price Index was upwardly revised to 4.5%, while the Producer Price Index in the same period hit 7.3%. Initial Jobless Claims for the week ended July 9 contracted to 360K, while Industrial Production rose a modest 0.4% MoM in June. Capacity Utilization in the same month rose by less than anticipated, reaching 75.4%. On Friday, the country published June Retail Sales, which came in at 1.3% MoM, much better than the -0.4% expected. The preliminary estimate of the July Michigan Consumer Sentiment Index missed the market’s expectations, contracting from 85.5 to 80.8, and well below the expected 86.5.

Meanwhile, inflation in Germany was confirmed at 2.1% YoY in June, while the EU reading printed at 1.9% YoY. The latter also published May Industrial Production, which contracted 1% MoM.

The main event next week will be the European Central Bank monetary policy decision. Policymakers are widely anticipated to maintain the current policy unchanged after the latest news on the matter. Investors will be looking for details on the new forward guidance and how tolerant policymakers would be with inflation. The EU will publish July Consumer Confidence, foreseen at -2.5 from -3.3 previously.

On Friday, Markit will publish the preliminary estimates of its July Manufacturing and Services PMI for the Union and the US.

The EUR/USD pair’s decline has firmed up ever since topping at 1.1974 on July 26. On a weekly basis, the pair has posted a third consecutive week of lower lows and lower highs. The pair has continued to develop below the 61.8% retracement of its March/May rally at 1.1920, heading toward the base of the range at 1.1703.

In the weekly chart, the RSI indicator has extended its slide within negative levels, maintaining its bearish strength. The Momentum indicator turned lower but remains around its midline. The 20 SMA gains bearish traction above the current level, while the longer moving averages remain well below it. All in all, the risk is skewed to the downside.

The pair is developing inside a descendant channel in the daily chart while giving signs of falling further. The 20 SMA heads south above the current level and far below the longer ones, while the 100 SMA crossed below the 200 SMA for the first time in a year. Technical indicators lack directional strength but remain within negative levels. 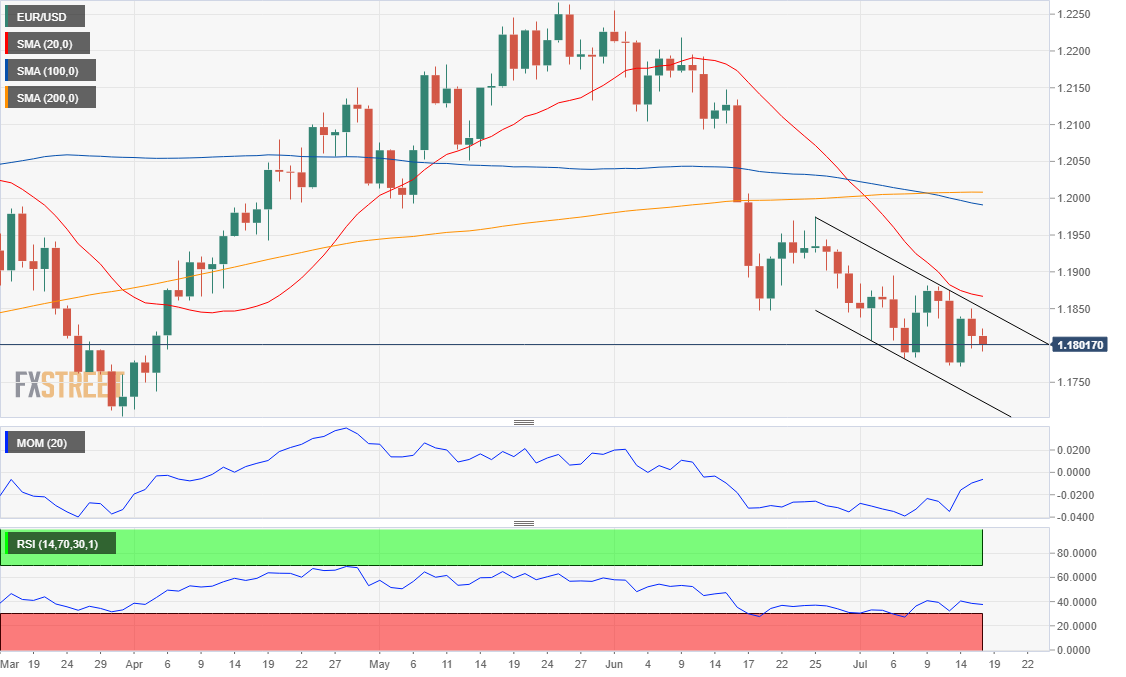 The FXStreet Forecast Poll shows that market participants are expecting the greenback to extend gains next week. 78% of the polled experts see the pair falling while none sees its advancing. The bearish pressure on EUR/USD eases in the monthly and weekly perspectives, bulls outpace bears, although on average, the pair is seen holding below 1.2000, down from the previous weekly poll.

The Overview chart the dominance of sellers is more clear. The three moving averages accelerated south, while in the three time-frame under study, most targets accumulate below 1.2000. Lower lows are likely, with bears extending the lower end of the range of possible targets.