The AUD/USD pair has fallen to 0.6670, an over a decade low, now poised to close the week some 100 pips above the mentioned level and unchanged for a second consecutive week. The Aussie plummeted Wednesday following the Reserve Bank of Australia monetary policy decision, as the central bank cut rates to a new record low of 0.75%. The 25 bps cut was largely anticipated by market participants, but dovish hints from policymakers, indicating further cuts coming. Governor Lowe stated that the RBA is “prepared to ease monetary policy further if needed to support sustainable growth in the economy, full employment, and the achievement of the inflation target over time.”

The pair recovered amid concerns that the US economy could experience a steeper slowdown, therefore forcing the US Federal Reserve to act beforehand and cut rates once more time before year-end. However, US policymakers gave no hint on that. Furthermore, even in the case the US cuts rates again, it will remain well behind the RBA in terms of adding stimulus, as speculative interest began suspecting the RBA could go all the way down to 0.%. That said, the pair was barely able to trim weekly losses, holding near the multi-year low and below the 0.6800 figure.

Could it recover further these days? For sure, but that doesn’t mean the Aussie will be stronger than the Greenback in the longer run. It would be just a correction in the middle of a long-term bearish trend that seems poised to continue toward the year-end. The US Federal Reserve will release the Minutes of its latest meeting this week, while Chief Powell is set to offer a couple of speeches, and could clarify whether the monetary policy is affected or not by the latest data.

Chinese data released this week was mixed, as manufacturing output has improved in September according to the PMI, although the services sector didn’t perform as well in the same month. China has been on holiday for most of the week, which provided some additional relief to the Australian currency.

Chinese holidays will extend into the beginning of the upcoming week, with little macroeconomic releases scheduled these upcoming days. Australia will publish inflation-related data and confidence-related numbers.

In the trade war front, the US and China will resume trade talks these upcoming days, and the market is seeing it as positive, although there are not many hopes that a resolution will be announced this soon.

As said, the AUD/USD pair is finishing unchanged for a second consecutive week, retaining the long-term bearish tone, as, in the weekly chart, the Momentum indicator keeps heading south within negative levels, while the RSI just turned flat around 39. The pair is also developing far below its moving averages, with the 20 SMA losing its bearish slope but around 0.6900.

Measuring the latest daily slump, the pair is currently battling with the 38.2% retracement at 0.6750, but overall bearish, as technical indicators have barely recovered from oversold readings but remain within negative levels as the 20 DMA accelerates its decline above the current level and below the 61.8% retracement of the same slump. This last comes at 0.6810, the level the pair needs to surpass to shrug off the negative stance, and have a chance to recover up to the mentioned 0.6900 level. Below 0.6670, the next support and natural target is the 0.6600 figure. 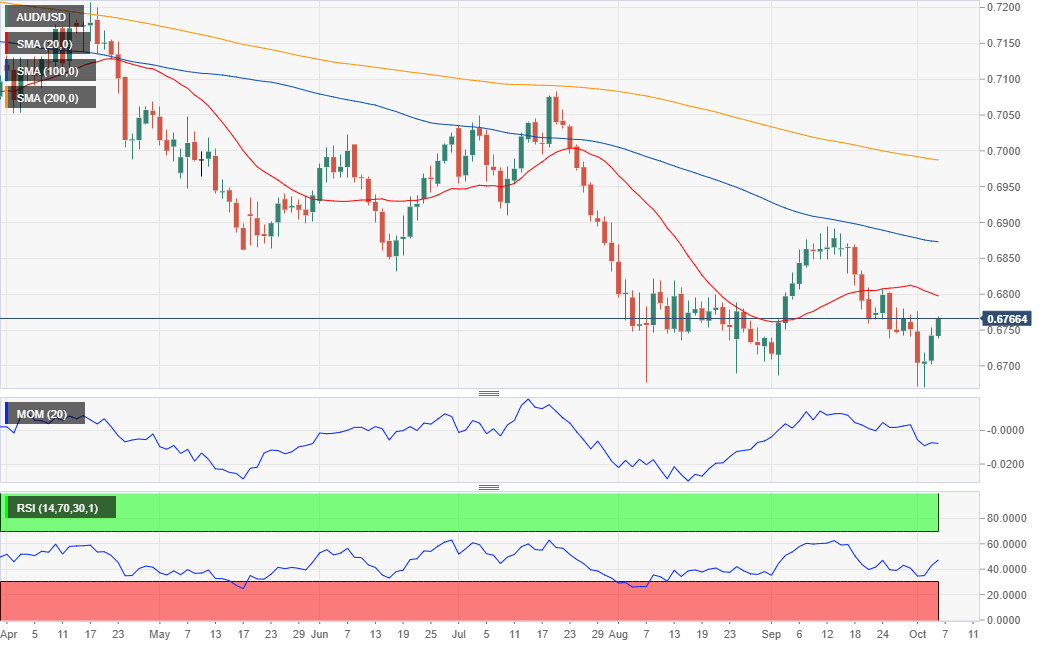 The FXStreet Forecast Poll suggests that the ongoing corrective advance may continue throughout this month before starting to fade. Gains are seen to be limited, as on average, the pair is seen around 0.6850 in both time-frame under study. In the three-month view, however, the pair is seen sideways, with the average target at 0.6750.

The Overview chart sows that the moving averages are now heading higher, as investors target levels above the current price, although chances of an advance beyond 0.7000 are not in the table just yet. The rally could continue these upcoming days, but the market has little faith the Aussie will enter a bullish trend in what’s left for the year.